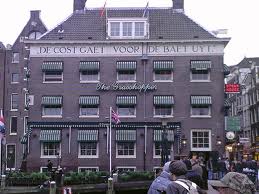 Dutch expressions can really be an eye-opener for people unfamiliar with Dutch culture. Dutch life is simple and straightforward. To foreigners this ‘proper’ way to live might come across as boring and stingy. But these seemingly unkind Dutch morals have a background: they have evolved out of the Calvinist history of The Netherlands, where work always comes before play and it’s not until we reach heaven that the time comes to relax.

This Dutch expression is actually printed on the façade of an old weighing house in Amsterdam. The saying makes it clear that before we can enjoy the profits, first investments be it of time, energy or money have to be made.

This Dutch saying is used for cheeky children who have the nerve to ask for candy or presents. As the saying goes, only if you quietly and politely stay put, you have the chance of receiving a gift.

Traditionally (this might have changed a bit over time), it is considered ‘not done’ to show your wealth by dressing up in fancy clothes, driving around in expensive cars and ‘bling-bling’.

Typical Dutch expression that shows the sobriety of the Dutch: eccentricity is not appreciated in The Netherlands. Foreigners might feel the Dutch are somewhat cheap.

At birthdays and gatherings, generally occasion to go a little overboard with food and decoration, the Dutch keep this saying in mind. Don’t expect any luxuries at a traditional Dutch birthday gathering or party.

Hospitality is not really a famous Dutch trait. This expression makes it clear how a visitor should behave: don’t stay for longer than 3 days with a Dutch family, because then the mood will likely turn sour.

An old Dutch saying that might very well still stand strong in the Dutch countryside, where the inhabitants are no very adventurous in their food. Typically, Dutch farmers from the ‘provinces’ prefer to eat food they know and trust.

The words ‘dubbeltje’ and ‘kwartje’ in this well know Dutch saying refer to the 10 cent coin (dubbeltje) and 25 cent coin (kwartje) in the times The Netherlands had the Dutch guilder as a currency instead of the Euro.

This expression means that it doesn’t matter what you do, you can never become more classy. This is the contrast of the American way of life, where you can become whoever you want to be, as long as you try hard enough.

Dutch expression meaning people who have little content in their words, often scream the loudest. This expressions refers to the Dutch moral of modesty.

Dutch proverb about criticizing. People who criticize others often are the same people who don’t do the actual work.

10. Wie wat bewaart, die heeft wat (Who saves, has something)

The Dutch verb ‘bewaren’ refers to keeping things instead of throwing them away. The fact that none of the English words ‘keeping’ or ‘saving’ cover the meaning, says something about the importance of this Dutch quality: don’t ever throw anything away, you might need it later.

But this Dutch expression also says something about the Dutch being the champions of the world in putting money on a savings account. Even in times of crisis, the Dutch still manage to live sober enough to be able to put some money on a bank account.

After all, you might need it even more later!

Travel to Amsterdam as a Student

Finding Your Sense of Equilibrium in...