10 Hidden gems to have a drink 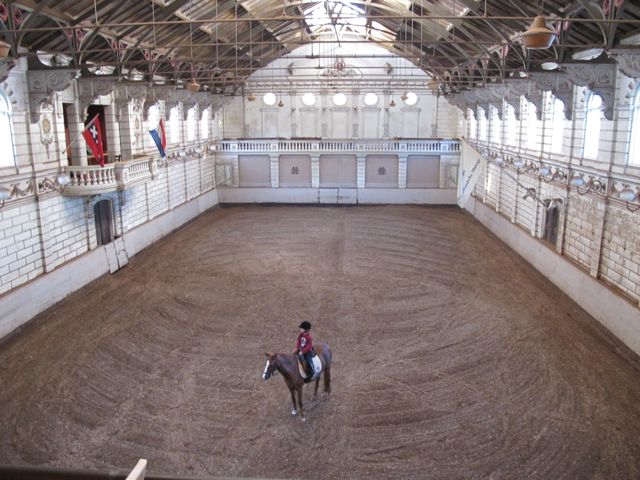 You know the problem: it’s cold, you’re tired. You feel like you’ve been walking up and down the streets of Amsterdam center forever and all the cafe’s and lunch rooms look touristy and bad. What you’re looking for is a nice place, somewhere to hang,  to enjoy the ambiance, the view, the menu. Something special. And not too expensive. Right?

To help you out, here are ten inexpensive, special cafés in the center of Amsterdam where you can drop in for a coffee, juice, apple pie, sandwich, cake, and brownies any time of the day and be entertained.

In the center of Amsterdam lies a real hidden gem: a complete horse riding school! In fact, The Amsterdam Manege the oldest riding school of the Netherlands and one of the last remaining city riding schools of Europe.

The building itself is a jewel, dating back to 1882. De Hollandsche Manege is a design of Dutch architect A.L van Gendt, who also constructed many factory halls in the Amsterdam Eastern Docklands and the Concert Building on Museum Square. The upper classes of Amsterdam practiced horse riding in the main hall and the Vondelpark next door. Nowadays, many children take classes and take care of horses and ponies. The horses cannot run outside though.

You can enjoy a coffee in the beautiful foyer upstairs and feel like 19th century bourgeois while you watch children taking their riding classes. In the back of the building, you’re free to roam the stables and pet the 55 horses and ponies.

Café, lunchroom Blue is located on the top floor of shopping centre Kalvertoren. Everywhere you sit there is a round glass windows with a special 360 graden view of Amsterdam. Elegant, modern interior.

The walls of this great little place on the Amsterdam Zeedijk are covered with all kinds of sixties and seventies stuff: lots of retro lamps dangling from the ceiling, cosy wallpaper, cheesy plates and romantic teacups that seem come straight from your granny’s place.

And guess what? Everything’s for sale! Shop while you you’re having a cuppa.

Café Int Aepjen (In the monkey) is one of Amsterdam’s oldest cafés. Café In ‘t Aepje was mentioned in sailor’s reports dating back to 1544. The café is one of only two remaining wooden houses in Amsterdam. It is the first house on Zeedijk in the Red Light District. The other wooden house is at Begijnhof.

Inside, the popular bar is decorated with an abundance of wood, like all bars used to be. The café feels more like a small museum, with old paintings and sculptures and barrels, too much to name. Located on the North point of the Zeedijk, the place used to be frequented by sailors waiting for their VOC-ships to take them on long journeys to the Dutch East Indies and other places around the world. According to the website, some of the sailors brought back monkeys to pay for their bills, hence the name: In the Monkey.

The Dutch expression To have stayed In the monkey refers to the times when unemployed poor bastards, hanging around the city, were picked up by tradesmen who gave them food and paid for a room at guesthouse In ‘t Aepjen.

In return, the tradesmen would sell the poor men to the VOC-ships. These tradesmen were called traders of the soul, because many of these newly employed sailors would not come back and spend the rest of their lives paying off their debts to the tradesmen by working on the ship.

To stay in the monkey (In de aap gelogeerd) is a Dutch expression meaning you have been taken for a fool.

Café t’ Mandje was the first gay and lesbian bar of Amsterdam. ‘T Mandje was opened in 1927 by the eccentric and openly lesbian Bet van Beeren. A remarkable mix of whores, pimps, sailors, artists and, because Bet was lesbian, homosexual frequented the place. Though not allowed to kiss in public, the homosexuals felt at home at Bet’s place. Bet soon became an icon of the Amsterdam gay scene. She was called Queen of the Zeedijk. From 1983 till 2008, during the heroine years on the Amsterdam Chinatown, the bar was closed.

Though the bar had been closed for a long time, the owners (family members of Bet), left the interior unchanged throughout all the years. The many items, photos and other memories in the busy, tacky interior has now been moved to the Amsterdam History Museum and Amsterdam archives. In fact, ‘t Mandje is a complete replica of Bet’s old bar. Bet’s old bedroom upstairs has also been restored and can be visited by appointment. Drinks only

Eating pancakes on a boat! Why not? While the ship is sailing on the IJ, you can eat an unlimited amount of pancakes! You can choose a boat ride of 1,2 or 2,5 hours. The pancake boat (Pannenkoekenboot) is tasty and fun, especially for kids!

A boat ride including pancakes with apple, bacon, cheese, fruit, jam, chocolate etc. as much as you can eat is available as of €15,00. The boat runs from Amsterdam North. First, you take the ferry from behind central station to the NDSM.

The Halls (De Hallen) was opened in 2014. It’s a series of large halls, connected by a public passage. One of the halls is home to the Food Halls. Basically it’s an indoor food market where you can enjoy a large variety of freshly made products.

The Amsterdam Food Halls are inspired by similar indoor markets like Torvehallerne in Kopenhagen, Mercado de San Miguel in Madrid and the Borough Market in Londen.

Besides the good food and large choice, the Halls are a national monument. They were constructed at the end of the 19th century, functioning as a depot for the first electric trams in Amsterdam. The Food Halls are located in one of the oldest most monumental hall in a typical Amsterdam neighbourhood of Oud-West. The lay parallel to the Kinkerstraat, connecting the Bilderdijkkade and the daily market of Ten Kate Market.

The Halls also host a cinema/movie halls, a public library, exhibition space, a hotel and a restaurant. In weekends there are often special market in the passage, such a the Local goods market (check Amsterdam events calendar for dates).

Gartine serves fruit and vegetables from their own vegetable garden. The interior, from lamps to cutlery and plates are all antique, giving the café a cosy, elegant and warm ambiance. Named by New York Times, Time Out, Living, Dutch Elle and many more.

The bar of the hotel Americain located at Leidseplein is not your typical chic hotel bar. Also known as the ‘living room of Amsterdam’, locals, artsy types, tourists and celebrities pop round for a drink. Just the stunning art deco interior is worth a visit. The hotel goes back to the year 1904, which makes the hotel bar of the Americain hotel one of the oldest grand cafés of Amsterdam. Open from 7 till 1.

It’s a  cool place and you can encounter real celebrities. Proof that this is true, hangs on the wall of the bar. Stay for a while, read newspapers from the world.

The interior of Brecht is based on the Berlin living room café, so it says on the website. Whatever that means, it looks nice. Café Brecht feels like you stepped in a time machine set 50 years back. Flowered wall paper, vintage couches, kitsch lamps, knitted tablecloths and games. Tea and coffee served in, here they are again, gran’s tea cups. With a crowd that matches the scenery (hipster).