SummerThings to do in Amsterdam 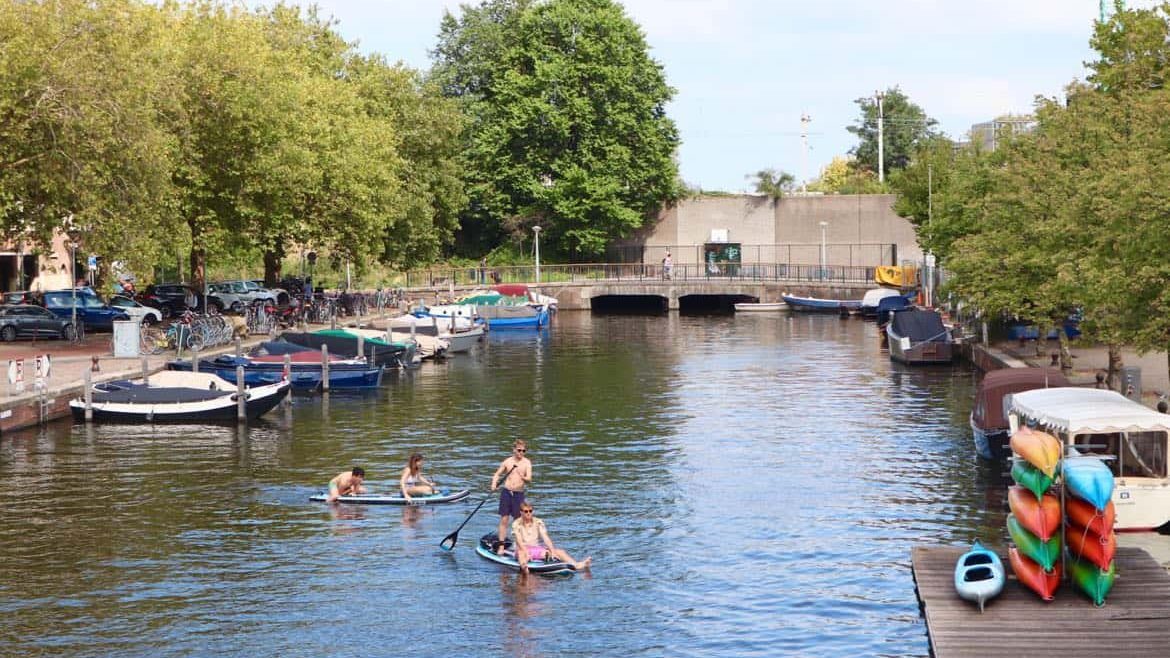 Traveling to Amsterdam in summer? The days and nights are filled with festivals for food, music, art, dance, theater and films. Explore Amsterdam Noord by bike, get drunk with the locals at De Parade, fill up at the many culinary festivals, watch a film in the open air, rent your own boat, organize a barbecue hassle-free, laugh at standup comedy or enjoy free classical music concerts on the Amsterdam canals.

10 Things to do in Amsterdam in Summer

When it gets hot, walking the narrow streets of the Amsterdam Red Light District is not a lot of fun. Biking is great fun, as long as you stay out of the center. Enjoy a lovely bike ride by taking the free ferry across the IJ-water to NDSM and bike along the water.

Pass by old shipping wharves, hip bars and chill out cafés and find out where the locals go on this self-guided IJ-lake Bike Tour. Combining drinking beer and riding a bike sounds like a bad idea? Not when you go on a Beer Bike Amsterdam Tour.

2. Rent your own boat in Amsterdam

Prepare a picnic and rent your own boat in Amsterdam is a great idea to spend a summer day or evening. Expect to pay around 100 euros for a couple of hours in the Amsterdam canals. You can enter the boat with max 6-7 people and share the cost.

Experience a totally different side of Amsterdam at the Kwaku Festival. This festival is held 4 weekends in July and August at Amsterdam’s multicultural neighbourhood Southeast (Nelson Mandelapark).

There is great food (100 food stands!) and music (3 stages!) from all over the world and that special vibe that only Amsterdam’s most colorful inhabitants can bring. The Friday Evening Concert is a special musical performance. Entrance is 5 euros, kids up to 13 years are free.

It’s easy to get to Kwaku Summer Festival by public transport. Go to Station Amsterdam Biilmer (trains and metro 50 and 54, many buses). Shop around at the shopping mall De Amsterdamse Poort to the festival (15 minutes walk).

4. Classical music on the Amsterdam canals

In August the Amsterdam canals host a great number of classical music performances. Yes, the canals. The canals, the island of Pampus, the Vuurtoreneiland (Lighthouse Island) at Durgerdam, the Stelling van Amsterdam (17th-century defense belt around Amsterdam), the roofs of houses, gardens, roof terraces all become a location of classical music concerts during the Grachtenfestival.

Amsterdam’s old Zoo Artis is open until sunset in summer! In June, July and August, the city’s favorite zoo features a special program in the evenings with activities for kids and live music. You may bring your own picnic, but meals are also available at the Zoo. Pizza is available from the outdoor kitchen. At twilight, there is a special guided tour of the Artis park.

Amsterdam’s full of culinary festivals where you can taste and buy locally produced goods and new international dishes. Generally, the festival is located in a beautiful location and free to enter. Often, music is provided and the food is accompanied by nice wines and sometimes locally produced beer.

Check out the Kimchi Farm Festival their new location De Ceuvel, the Pure Markt every month at Amstelpark, the Food Truck Festival at Amstelpark and at Westergasfabriek the monthly NeighbourFoodMarket and Sunday market. An overview of all things to do in Amsterdam is found on the Amsterdam Events Calendar, by month.

De Parade might be announced as a Theatre Festival, it’s also the place where the young and old gather, sit around tables and wander around to see, be seen, get drunk and (towards the end of the night) hook up.

So if you want to meet up with some Dutch locals, head over to this park along the river Amstel, buy your entrance tickets and buy a bottle of Rose wine to blend in. Every day there are many theatre, dance, mime and musical performances, each of which you need to buy additional tickets for. The quality of the performance varies greatly. But the entourage and circus tents are great, and so is the ambiance.

De Parade is every day in August at the Martin Luther Kingpark. It’s best reached by bike, like the Amsterdam do. If you have no bike, travel to the Amstelstation (train, tram, metro) and walk 15 minutes. From Central Station, take tram 4 and get out at Victorieplein, walk for 10 minutes.

There are many markets in Amsterdam where you can not just buy food, but be entertained as well. Try delicious food, walk around, enjoy some live music. Pure market, NeighbourFood market and Sunday Market at Westergasfabriek or one of the daily food markets are a really good way to spend your time in Amsterdam, try local food and a chance to mingle with the locals.

There are beaches near Amsterdam! If you don’t want to leave the city, try one of the many Amsterdam city beaches, some even have swimming options.

Always something to see and do...

Free things to do