Most people who visit the Anne Frank House in Amsterdam know the basic info of Anne Frank: Anne Frank was a Jewish girl, born in Germany, who fled Nazi-Germany in the 1930s with her family. She came to Amsterdam. When the Second World War began and the Nazis occupied the Netherlands she and her family hid in the secret back rooms (‘Het Achterhuis‘) of an Amsterdam canal house (Prinsengracht 263) for 2 years. Anne kept a diary throughout this time.

In 1944 Anne was sent to concentration camp Bergen-Belsen, where she died, 16 years of age, of typhus, just like her sister. A friend of the family found the diary and gave it to Anne’s father, who was the only one of the family to survive the war. He decided to publish the diary. Over 20 million copies were sold. Since 1960 the former ‘back house’ where the Frank family hid is open for visitors. The Anne Frank Museum is now one of the main tourist attractions in Amsterdam.

Here are 10 facts about Anne Frank: 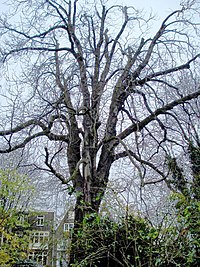 The Chesnut tree next to the Anne Frank House.

From her hiding place, Anne Frank looked out on an old chestnut tree. In August 2010 the chesnut tree was toppled in a storm. Only 3 years before that the tree had been the centre of attention because the Amsterdam council planned to chop it down. It appeared to be in danger of falling over. People were shocked to hear that. A court decided the tree could maintain in the garden. Also, a nut from the tree was sold on eBay for €7,000.

In January 2010 Miep Gies died, aged 100 years old. Miep was a friend who hid the family in the attic above Anne’s father place of business. Miep was the one who found Anne’s diary and gave it to Anne’s father.

The Diary of Anne Frank has been translated into many languages and is still sold everywhere arond the world. Not only has the book sold well, there have been movies and theatrical plays based on the diary. There is even a graphical novel about Anne Frank. There is also an Anne Frank Center for Mutual Respect in New York. The Anne Frank Fonds is based in Basel, Switzerland. This foundation is the Frank family’s universal heir and  evotes itself to the distribution of the Diary of Anne Frank.

4. Anne Frank is on You Tube

In 1998 it turned out that the diary of Anne Frank was not the whole story. Anne’s father had cut out 5 pages of the diary. The new info of Anne Frank was about personal information that her father preferred to keep secret. On these 5 pages Anne describe her views on her parents’ marriage and her difficult relations with her mother.

Anne didn’t only write a diary, she also wrote down notes and quotes that she read and heard. The ‘beautiful phrases-book’, as she called it has also been published. She took many quotes that she liked about justice, happiness, war and love from writers such as Shakespeare, Multatuli, Wilde, Goethe and Maerlant.

7. The betrayal of Anne Frank

It is clear that Anne Frank and her family and the location of the secret hiding place were not discovered by chance by the Gestapo. They were betrayed by someone. Who betrayed them and why, has been discussed in some books: in Melissa Muller’s Anne Frank: the Biography and Carol Ann Lee’s The Hidden Life of Otto Frank, but evidence was never substantiated.

Prinsengracht 263, front door of the house where Anne Frank was hiding. The entrance to the museum is next door.

The most popular museum in Amsterdam is the Van Gogh Museum. The Anne Frank House is second and receives about 1,5 million visitors a year. The house itself is quite small (obviously), so there is a spacious building built next to it that serves as an exhibition space.

Anne Franks House is a nice museum for children and youngsters to visit. A third of the visitors is under 30 years old.

Even American president John F. Kennedy read The diary of Anne Frank. In a 1961 speech he said: ‘Of all the multitudes who throughout history have spoken for human dignity in times of great suffering and loss, no voice is more compelling than that of Anne Frank.’

Why You Should Try Amsterdam’s Museums Even If...

A sunny begin of 2021 in Amsterdam. Happy new year

Visiting my friends in Groningen this last weekend

The Red Cinema is a very small theatre at Amsterda

Any cookies that may not be particularly necessary for the website to function and is used specifically to collect user personal data via analytics, ads, other embedded contents are termed as non-necessary cookies. It is mandatory to procure user consent prior to running these cookies on your website.