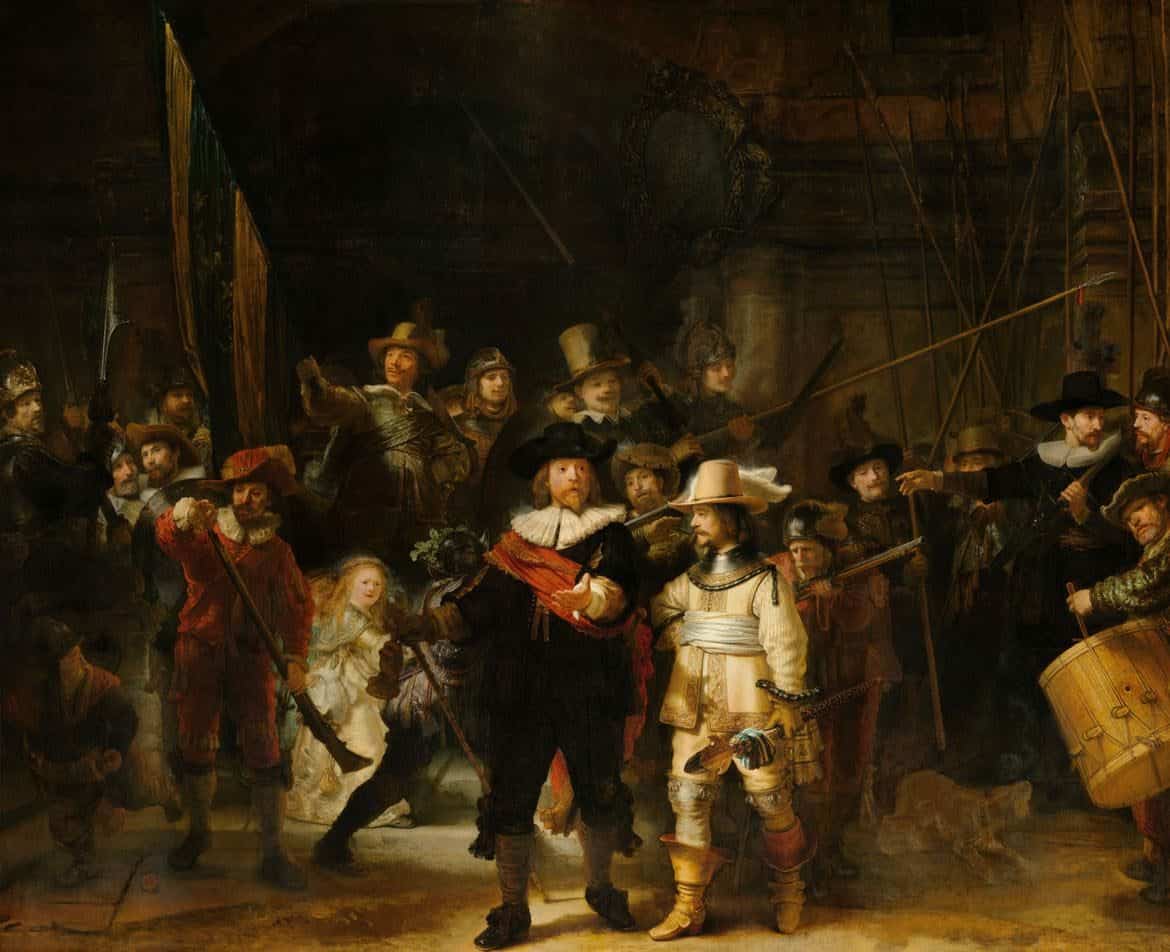 18 February 2019 – In 2019 it’s exactly 350 years ago that the Dutch painter Rembrandt van Rijn died. Reason for The Netherlands to honour Rembrandt and the Golden Age, the era when he lived. The year 2019 is officially called the ‘Year of Rembrandt’. Many museums in Holland are dedicated to the famous 17th century painter and bring light to this era of wealth and prosperity.

Not only in Amsterdam, the city where where Rembrandt worked and lived almost his entire life, but in many other cities of The Netherlands there are special events and temporary exhibitions. Many focus on the 17th century, the Dutch Golden Age. This is the time when the economy of The Netherlands boomed and the Dutch conquered the world and ruled the trade of the East Indies.

As a result of the wealth, art also flourised. Amsterdam had Rembrandt, Delft had Johannes Vermeer, Dordrecht had Nicolaes Maes, Haarlem had Frans Hals. These are all big painters, whose paintings were hanging on the walls of the rich merchants.

The Year of Rembrandt is the perfect opportunity to see the masterworks of the famous Dutch painter in real life. Here are 5 exhibitions where you see the best of Rembrandt, learn about his life and about life in general during the Dutch Golden Age.

1. All the Rembrandts at Rijksmuseum

The Rijksmuseum is The Netherlands most famous museum. The art and history museum is dedicated in large part to the Dutch Golden Age and it holds the largest collection of Rembrandt paintings. This is by far the best way to get to know the amazing paintings of Rembrandt.

The temporary exhibition ‘All the Rembrandts’ explores the life and work of Rembrandt through themes. Through many of his self portraits we see Rembrandt as a young artist; through the portraits of his family such as his wife Saskia and his mother we see Rembrandt as a young man. His paintings of beggars and buskers shows he was interested in the wider world around him and not just in the higher social circle he was a part of. Lastly, the exhibition shows the stories Rembrandt tells in his paintings, many of which are from the Bible.

RECOMMENDED READ: What Amsterdam City Pass should I get?

The grand mansion where Rembrandt lived and worked is in the center of Amsterdam. It can be visited because it is a museum now: The Rembrandt Museum. The beautiful 4-storey house with its wooden floor boards and great windows (light!) is an original from the 17th century. Walking around you get a good feeling of how people lived and of how Rembrandt worked and what techniques he used.

The beautiful city of Leiden is the birthplace of Rembrandt. Museum De Lakenhal in Leiden is therefor most appropriate to present the exhibition ‘Young Rembrandt 1624 – 1634’. The expo shows his early work: about 40 paintings and many drawings. Among them are exceptional pieces borrowed from national and international museums, such as ‘The Noble Slav’ (1632) from the Metropolitan Museum New York (USA) and Self portrait (ca. 1628).

4. Rembrandt at the Mauritshuis

The great Mauritshuis museum in The Hague also has an great collection of paintings by Rembrandt. From 31 January till 15 September 2019, they are all on show. Among the 18 works there are masterpieces such as ‘The Anatomy Lesson of Dr Nicolaes Tulp’ and Rembrandt’s late self-portrait, but also paintings that are no longer considered to be by Rembrandt.

The paintings are accompanied by stories about how they entered the collection. Who discovered the painting? Was it acquired or donated? How did people view it over the centuries? Visitors will also be encouraged to look closely and compare to try to tell the difference between a real ‘Rembrandt’ and a ‘non-Rembrandt’.

In 1634, Rembrandt van Rijn married the love of his life: Saskia Uylenburg. She was from Leeuwarden in the northern Dutch province of Friesland. Reason enough for the great Frisian Museum to dedicate an exhibition about Friesland’s most famous couple.

‘Rembrandt & Saskia, Love in the Dutch Golden Age’ shows the ins and outs of a high society marriage in the 17th century: from the early stages of courtship, fairytale-like weddings and the founding of a family to the pitfalls of marriage such as child mortality and adultery. Marriage portraits, intimate sketches and personal objects tell the story of how love and suffering were shared in the Dutch Golden Age.