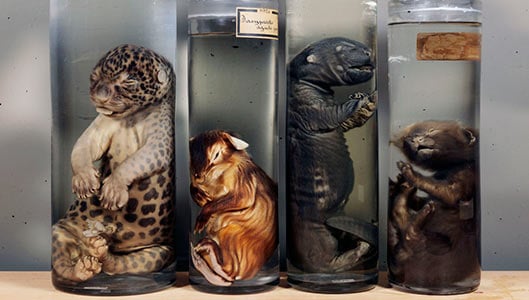 Weird museums and strange collections are not hard to find in Amsterdam. In the 16th and 17th century the Dutch bourgeoisie was famous all over the world for their collector’s cabinets. From journeys to far and exotic places, Dutch travelers took home as many stuffed animals, dried plants and bizarre-looking seashells and stones as they could. Collecting was done for showing off and later, for collecting. Here are 5 weird museums in Amsterdam:

The Dutch Funeral museum – ‘Nederlands Uitvaart Museum’ is called Tot Zover (until so far). A not so morbid name for a museum that features caskets, urns, death masks, and other death paraphernalia and pictures funeral ceremonies and cultural rituals surrounding death.

The museum states on the website that Tot Zover inspires people to think about death. It will certainly not cheer you up. It is curious though. Children are welcome to come along and can join in the fun by making a mini-casket for a dead pet.

Museum Tot Zover is open from Tuesday to Sunday from 11.00 to 17.00.
The museum is located near the cemetery De Nieuwe Ooster at Kruislaan 124.
How to get there: Take tram 9 from Central Station, tram stop: Kruislaan
Check out the website Museum Tot Zover for the temporary exhibition.

The Vrolik Museum is an example of a private collection of weird stuff becoming so big it was made into a museum.

Collector was Gerardus Vrolik, who lived from 1755 to 1859. Vrolik was an important scientist back in the days when the contents of the human body were mostly unknown.  As an anatomical scientist, Vrolik, and later his son, made it expertise to find out more about the working of the human-machine.

Father and son did so by cutting open dead bodies and collecting the parts found. His favorite were strange embryos and anatomical abnormalities. Excited yet?

The Vrolik Museum is found at the Academic Medical Center (AMC hospital). The collection is still used for research by medical students. It does not feel like a hospital though when you wander around the glass and old wooden cabinets. The museum feels for an appropriate reason quite…eerie.

At 6m2, the Museum Perron Oost is Amsterdam’s smallest museum. The museum is housed in a charming little cottage located at a former train platform at the Amsterdam Eastern Docklands.

Museum Perron Oost tells the story of the Amsterdam Eastern Docklands: from an industrial area to passenger shipping service to Indonesia, Suriname and the United States, a shelter for Jewish refugees, prison, juvenile detention center, squatters and city nomads who inhabited the area. They all left behind their stories, which the museum tries to recreate with dance and music performances, film, visual arts, installation, and poems.

More Amsterdam shipping history is to be found at Museum t’ Kromhout. ‘t Kromhout is one of the only remaining shipyards of Amsterdam. It makes ‘t Kromhout a living museum that still repairs mostly historical vessels.

The shipyard was founded in 1757. Around 1900 there were at least 30 shipyards in the area, producing iron ships powered by steam engines. ‘t Kromhout was one of only two Amsterdam shipyards saved from demolishing.

The yard is housed in an imposing wrought iron hall. Many old ship engines are on display (and running!)

Most famous is its own developed 12 pk Petroleummotor dating back to 1904. A must-see museum for all those people who get excited by the thought of looking at the oldest remaining steam winch and an entire collection of running internal combustion engines!

‘t Kromhout is open for visitors every Tuesday from 10.00 to 15.00. Experts are around to show you around and explain the working of the machines. On other days, groups are welcome by appointment.
‘t Kromhout is located at Hoogte Kadijk 147, near the Maritime Museum and Museum NEMO.

Another museum where the collection is still in motion is the Electric Tramway Museum. Trams from the 20th century run a tram service from Amsterdam to Amstelveen.

You can get out on many stops on the way and just catch the next tram. Everything is in style: there is a conductor on board who sells the ticket, there’s the bell to announce the next stop, there are the original wooden interior and historic lighting. Fun for kids!

The historic trams run every Sunday from Easter to November and there are special tram ride for Sinterklaas, Christmas and New years’ Eve. You can also rent your own vintage tram (all year round).
The tram starts at the Electric Tramway Museum (with nice museum shop!) at Haarlemmermeerstation, Amstelveenseweg 264.