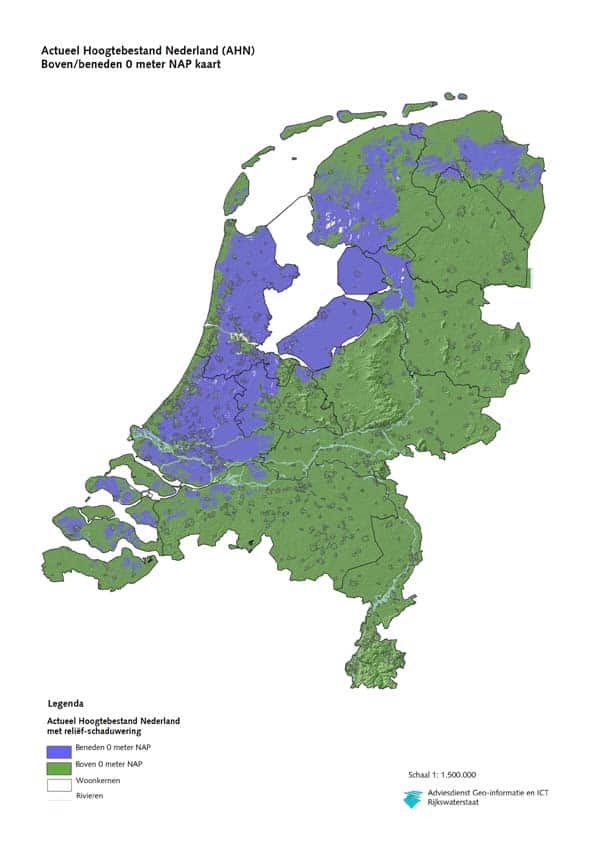 Holland is famous all over the world for some of the weirdest facts. Not all of the crazy facts are true, however.  Here are some of the myths about Amsterdam that are popular.  Find out if they are true or not in this list of Myths about Holland.

1. Prostitution is legal in Amsterdam

Since 2000 prostitution is officially legal in Amsterdam and The Netherlands. Discussions, plans, and ideas to regulate prostitution had been going around since the 1950s.

According to Dutch law, women may sell their body and services for money when:

The law was instated to protect the prostitutes and fight forced prostitution. Brothels and window prostitutes need a license to do their profession. This license system made it possible for Amsterdam to close many prostitution windows in the Red Light District of Amsterdam.

2. Amsterdam is below sea level

True. Parts of Amsterdam are 4 meters below sea levels!

The lowest part in Holland is 6 meters below sea level!

Still, the Dutch aren’t worried about flooding. The Dutch have an innovative system of dikes, dunes, canals, and barrages to protect them from the water.

Specially elected ‘water boards’ (Waterschappen) check the level of water. They adjust the levels by pumping out water to the higher canals and rivers that run to the sea.

3. Amsterdam will flood due to global warming

Global warming will cause the ice on the North Pole to melt. Sea levels will rise, also in the Netherlands. If nothing is done, Amsterdam will flood because of climate change.

From 2050 onwards, sea levels will rise 2 to 4 meters. Current dikes in Holland are meant to withstand a rise of 1 meter in 2100. The Netherlands is thinking about ways how to prevent flooding: by building higher dikes and bigger pumps.

4. A little boy stopped a flood in Holland by putting his finger in a dike.

False. Hans Brinker is not a real boy, he is a fictional character in a book.

Hans Brinker or the Silver Skates is a children’s book about all kinds of adventures that take place in Holland. It was written in 1865 by the American author Mary Mapes Dodges.

In one of the adventures, a little boy living near Haarlem finds out that the dike that protects the land from the sea is leaking water. By putting his finger in the dike, a potential disaster is avoided. Unfortunately, nobody is aware of the heroic act and so the boy stays there, in the cold winter night all the time keeping his finger in place. Only the next day a clergy finds the little boy.

Interestingly, that little boy is not really named Hans Brinker, but the story is remembered that way. Also, the author had never even been to Holland and so many historic facts from the book are incorrect. The book, however, was a big hit in the United States and made people very interested in Holland.

The story was also translated into Dutch and published in The Netherlands, but the story about the little boys who put his finger in the dyke is not as well known in Holland as it is in America.

False. Slavery has been known to exist in all times and in all civilizations.

The Romans famously enslaved entire populations, using them for fun (gladiators, sex slaves) and labor. In the Middle Ages, the slave trade was big business, with Arabs, Greek and Jewish merchants all involved in buying and selling slaves. In North-Africa slavery was very common from the 11th to the 14th century. White Christians were captured during raids in Europe and black people were purchased or captures in Africa and transported to major slave markets in Algeria and Morocco.

In many parts of Africa, it was common to enslave a large part of the population. Upon conquering a tribe, the population would be enslaved to the other tribe. The Ashanti, for example, is known to have captured many slaves.

When the Europeans showed an interest in the African slaves, the hunt for slaves became even more lucrative. Arab traders would take the captured slaves to the coastal cities and sell them to the Portuguese and Spanish from the 15th century onwards.

When the Dutch conquered Brazil from the Portuguese in 1630, the Dutch needed strong men to work on the sugar plants and started with the large scale shipping of African slaves. The Dutch transported over 500.000 Africans to the Americas. This is about 5 % of the total amount of the Atlantic slave trade.

Read more about Slavery in Amsterdam

True. Dutch farmers wear clogs made of out of wood.

The benefits of wooden shoes are great. They protect the foot against falling objects or the treading of animal hoofs. They also have great isolation qualities: your feet stay warm in winter and cool in summer.

Wooden shoes date back to the Middle-ages when clogs were popular all over Europe. In the 15th century, the clog was made out of one piece of wood. The wooden shoes were strong and kept the feet dry while walking in the muddy streets and in marshy lands, like in Holland. Clog making is a real skill that’s still practiced by professional clog makers in Holland.

Nowadays, clogs and clog makers have become a tourist attraction and are mostly produced as a souvenir, but I can recommend you wearing your Dutch wooden shoes at home.

It takes some getting used to (wear thick socks!) but then you have a pair of shoes that’ll last you a lifetime.

6. When a cop stops you in Amsterdam, they have no right to search you

Partly true. Like they said in the film Pulp Fiction, a cop in Amsterdam does not have the right to search you if he doesn’t have a specific reason to suspect you of doing anything illegal.

In the same way, a police officer in Amsterdam cannot search your bag, your car or your house without permission from you or from a judge.

However, since 2011 it’s possible for a mayor to name a specific area as a ‘safety risk areas’.

Hello,
I lived in Amsterdam for some years and I learned that Amsterdam is below sea level, as you wrote above, but I always had questions about it and I never got answers for my doubt and perhaps you can:

1) Since Amsterdam is up to 6 meters below sea level, how it could exist in the first centuries of its existence, since they didn’t yet have technology to build those big dams?

2) When I use Google Earth and hover the mouse over Amsterdam, I don’t get any negative measuring of the ground over Amsterdam, but I get it when hovering in areas around Purmerend, Volendam, Monnickendam and Flevoland?

Hi! Thanks for your comment!
First of all: 6 meters below sea level is very extreme! In Amsterdam, most of the streets are raised. The houses are built on poles. However, parks like Vondelpark are not raised. So these are below sea level (about 1,5 meters). You will notice when you walk into a park.

Some parts of Holland (West Netherlands) are indeed much lower, in extreme cases up to 7 meters below sea level. But this is all man’s own fault! From about 1500, the Dutch started to dig out the soil to use it (peat, in Dutch: veen) as fuel for heating. After the peat was taken out, the holes filled up with ground water and huge lakes were the result. The lakes were very dangerous, villages were often flooded. So the lakes were drained by windmills. Many drained areas still have the word ‘meer’ – lake, like Watergraafsmeer, Slotermeer, Haarlemmermeer.

By the way, Flevoland used to be water, part of the IJsselmeer. Flevoland is totally man-made land (by first placing dykes and then draining the insides, works started around 1930).

The result of draining the water are the famous polders. You see this land everywhere aroud Amsterdam: green meadows. All these polders are still very wet. Machines everywhere keep the polders dry 24 hrs a day. This land is only suitable for cattle farming. That’s why there is so much cheese in Holland!