Why are Amsterdam houses crooked? 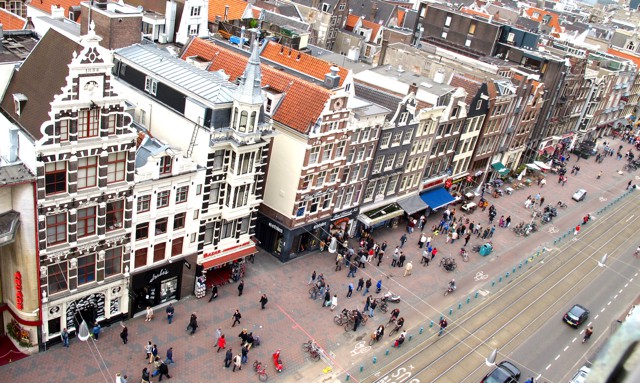 Why are houses in Amsterdam crooked? Many of the houses in the historic center seem to lean forward. Others look tilted to one side. Some even seem to fall over any moment! There are various reasons why Amsterdam houses are crooked, slanted and skewed. Here are the reasons.

All houses in Amsterdam are built on piles. The piles are drilled meters deep into the wet soil. If you build houses without a sturdy pole, it will quickly sink into the swampy ground.

But in the old days, the piles were made of wood. The Amsterdam soil consists of 11 meters of soft peat and clay before the wood pole hits the first solid layer of sand.

Nowadays the piles are made of steel tubes, filled up with cement. The piles are drilled further into the ground until they hit the second layer of sand, at 18 meters deep.

How to check the foundation of an old house in Amsterdam

There is no way to check the condition of the foundation of an Amsterdam Canal House. You need to break open the floor and dig into the ground to find the piles.

Sometimes an investigation has already been done. The council of Amsterdam keeps record of these investigations and save the reports for future reference. If you ever buy a house in Amsterdam, make sure you check with the council. And check the walls for cracks.

Reason 2. One of the next-door houses was renovated

The houses along the canals in Amsterdam lean on each other for extra stability. Problems arise when one house in the row is renovated. When the poles are not in the best condition, the houses next door will start to lean to one side.

Houses on corners have it extra hard. They don’t have a neighbour building to lean on.

Reason 3: The wooden poles are corrupted

Another reason for the Amsterdam houses to tilt to one side is because the wooden poles start to rot. In Amsterdam, the water level is controlled. A special governmental agency called Waterschap checks the water level.

The Waterschap may decide to lower the water level. When that happens, the wooden poles are exposed to air. When wood comes in contact with oxygen, it will start to rot. The decay of the wooden foundation is why houses in Amsterdam built on wooden piles can lean to one side.

Especially in the Amsterdam Jordaan Quarter, houses started to sink into the ground when they added an extra floor on top. The weight of the house is bigger than the old builders had calculated all those centuries ago. The result: a crooked Amsterdam facade.

Why are houses in Amsterdam leaning forward?

In many cases, houses in Amsterdam seem to lean forward, towards the street. This is not an accident. For centuries, it was custom to build houses leaning forward.

In Medieval times, all over Europe, all houses were made out of wood. These timber-framed buildings had an upper floor larger than the size of the floor below. This technique is called jettying. (In Dutch: overstek).

In these times the walls and roof were not as waterproof as nowadays. Rain could drip through the walls and wet the wooden floorboards. A house that was leaning forward was protected against rain, snow and wind.

Reason 2: It makes the house larger

The ‘leaning’ houses in Amsterdam also have the advantage that they are a little bigger, without taking up too much space on the street. Especially in a narrow medieval street plan, a leaning house is an advantage.

Reason 2. It makes it easier to hoist up goods

Most of the houses in Amsterdam were not used just for living. They were also used to store goods. Amsterdam was a typical ‘staple port’. This is a place where merchants make money by trading all kinds of goods that enter into the city, usually by boat.

Goods like cotton, spices, and cacao were stored in special warehouses, and in the attic. The goods were hoisted up from the street using the hook on the beam sticking out at the top floor. A leaning facade meant it was less likely that the goods hit the wall or break a window.

After a large fire in 1452 destroyed a huge part of the wooden houses in Amsterdam, new houses were as much as possible constructed with bricks. But this didn’t mean the way of constructing a house was much different. The traditional construction guild of Amsterdam kept the tradition of building leaning houses.

It might sound silly, but it’s quite probable that the houses of Amsterdam lean forward because their owners wanted to show off their fancy facade. The wealth and glory of the Amsterdam Canal Houses is mostly found in the upper part of the facade. After all, that’s where the gable is. When the house is leaning forward, you can see those decorations much better.

So when did all this change? Well, it wasn’t until Napolean. Napoleon did away with all the existing guilds of Amsterdam. And houses were built straight. Halfway through the 20th century, it was even banned to build ‘op de vlucht’. Nowadays it is allowed to build a leaning house in Amsterdam when all the other houses are leaning as well. It just looks better that way.

Is ‘Holland’ and ‘The Netherlands’ the same?

Loved this informative article! Do you recommend any specific locations (besides the most famous Dancing Houses) where we might go to view the lateral deviation of some of these amazing canal homes? Thanks:)
https://valentinasdestinations.com/