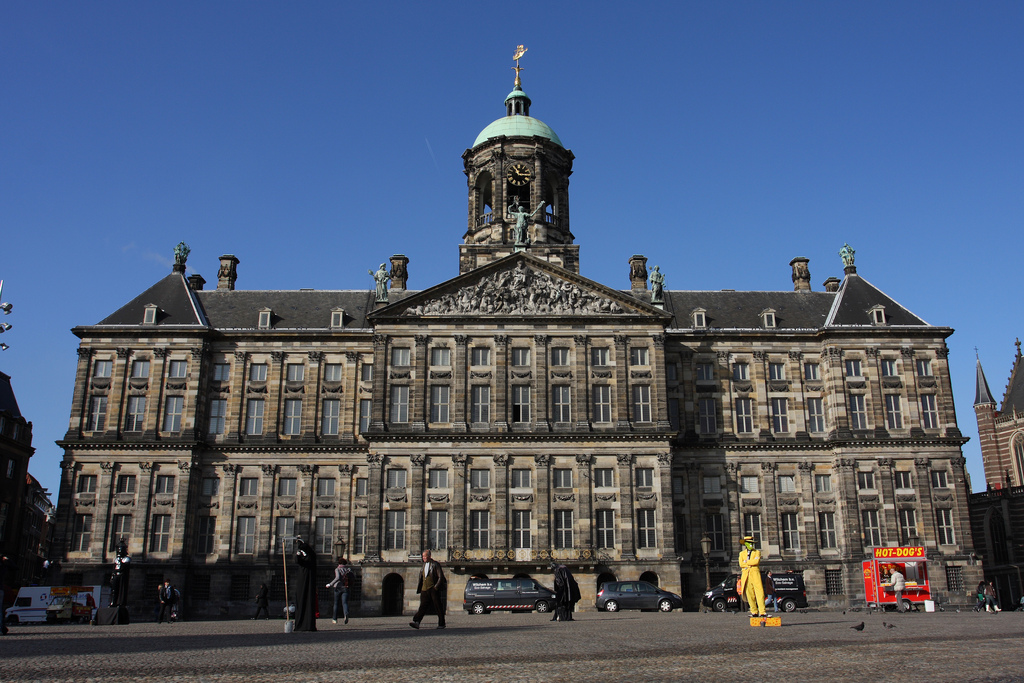 The Amsterdam’ Royal Palace on Dam Square holds one of the best kept and most complete collections of the Empire style in the world. Originally, the palace was built as a grand City Hall in the Dutch Golden Age (17th century). The King and Queens of The Netherlands use the palace to receive official guests. It is open for visitors. Here are 7 reason to visit the Palace.

1. A City Hall and a Royal Palace

The Royal Palace on Dam Square was built originally as the Amsterdam City Hall. During the Golden Age, Amsterdam was a powerful city. The international prestige had to be mirrored in the house of public administration and services. The result was the largest and most impressive non-religious structures built. A symbol for the powerful symbol of liberal Amsterdam.

During the French occupation of Amsterdam in 1808, Louis Napoleon, the brother of Napolean declared himself King of The Netherlands. He transformed the Amsterdam City Halls into his Royal Palace in a rich Empire style.

2. Sculptures and paintings inspired by Romans and Greek

The Royal Palace is built in the Dutch Classicist style. The architect, Jacob van Campen, was inspired by the Roman empire and Greek architecture. The palace is lusciously decorated with sculptures and paintings about Roman and Greek mythology and biblical stories.

After the official opening of the City Hall in 1655, it took another 60 years to complete the interior design. Many paintings were made by the most famous artists of those days: Rembrandt van Rijn, Ferdinand Bol, and Govaert Flinck. The sculptures were all made by Artus Quellinus, an artist from Antwerp.

Visitors will find the main hall, the Burgerzaal (‘Citizen Hall’) the most impressive. The floor is laid with a map of the world in Italian marble. In the 17th century, the doors to this hall were always open. People gathered here for business and pleasure.

All of the rooms and halls had a special function, made clear from the symbolic sculptures that decorate the entrances and the paintings on the walls.

One of the rooms of the Amsterdam City Hall was the Orphan Room. This room was the office of a special commission that protected the interests of the orphaned children of Amsterdam. A caretaker was appointed to keep save the finances of the orphan.

The Orphan room is decorated with a painting by Cornelis Holsteyn. The painting depicts an (old Greek) story about the legendary lawmaker Lycurgus. Lycurgus had been made King of Sparta since his brother died. But his brother’s widow was pregnant. She promised to get rid of the child if Lycurgus would marry her. Lycurgus plays along until the baby is born and then protects the newborn child. In the painting we see him holding out the baby to the public, calling it the new King.

One of the most important events happening in Town Hall on Amsterdam Dam Square was the court of Justice. Criminals received their official death sentence during a special public ceremony. In the Justice Room, the public could watch the scene through the barred windows.

A criminal could only be sentenced if he had confessed the act. In the cellars of the Amsterdam Royal Palace, there were prison cells with torture chambers and dungeons. Here, suspects were questioned to get a confession.

After the sentence ceremony, the public execution took place on Dam Square, usually by beheading. But also hanging and strangling was possible.

The Justice Room is decorated with sculptures of three famous verdicts: Zaleucus, Salomo and Brutus and there are symbols of justice, death, and punishment.

In 1808, Amsterdam is occupied by the French army led by Napoleon Bonaparte. Napoleon’s brother, Louis Napoleon, adores Amsterdam. He asks his brother if he may be King of Holland.

And so it happens. Louis Napoleon settles in the old City Hall, which he completely redecorates to make it the Amsterdam Royal Palace.

His preferred style is the Empire style, a style that is inspired much by Antiquity. And so it matches rather well.

The prison cells become wine cellars and the cold marble floors are covered with thick carpets. On the outside, facing Dam Square, he puts up a balcony, where the King can address his people.

7. Palace of the Dutch Royal family