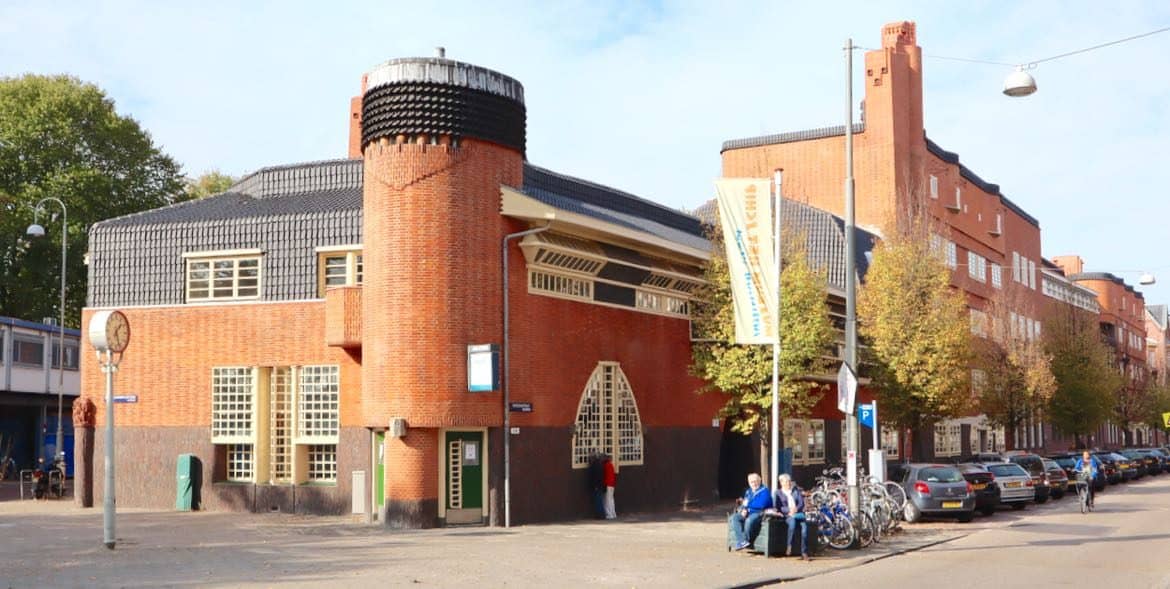 The Amsterdam School architecture style might not be as famous as its international sister styles from the same era like Art Nouveau and Jugendstil, its beauty is certainly so. In the last decade, this rather outrageous Amsterdam architecture and art style has seen a revival in its appreciation.

The young architects and artists took their inspiration from nature and its natural, organic shapes as well as mathematical geometric forms. Curved lines were united with flowing forms with more angular contours.

The three young friends who created the new style are the architects Van der Mey, De Klerk and Kramer. Their designs are a strange mix of romantics, expressionism, and fantasy. Journalists soon called the new style the Amsterdam School (Amsterdamse School).

The first building in the Amsterdam School style was the Scheepvaarthuis. This ‘Shipping House’ was finished in 1916. (It is now the Amrath Hotel). The order came from 6 of the largest shipping companies in Amsterdam. The result was a rather mysterious office palace.

The Amsterdam School developed into a total art style. Not only buildings and bridges were created, but also graphic art and furniture.

The Amsterdam School architects had ideals. They wanted to use art to create a better society. In some parts of Amsterdam, the working class lived in slums. A new united front of government and private housing corporations started housing projects on a grand scale to better the living conditions of the poor.

The time was right: socialism was popular. In 1901 a revolutionary Dutch Housing Law was approved. This law stated the basic conditions for a new house in detail.

A palace for the working class

To create these ‘palaces for the working class’, everything was allowed and possible. Every craft, art, shape and colour was used: brickwork, masonry, art glass, wrought ironwork, ‘ladder’ windows, strange towers ad roof tiles used to decorate the facade. Amsterdam School sculpturer Hildo Krop made the most fantastic sculptures.

The popularity of Amsterdam School style architecture was short-lived: between 1915 and 1930. Critics pointed out the many unpractical parts of the designs, the huge construction costs and the outrageousness of the style. Until the 1980s the style was considered ugly and useless.

Fortunately, in recent years, the Amsterdam School style has seen a revival. At Spaarndammerbuurt Museum The Ship was opened.

The museum is housed in one of the most famous examples of Amsterdam School architecture. The building was designed by Michel de Klerk. It is called ‘The Ship’, because it looks a bit like a ship.

At the museum, there is a presentation of Amsterdam School architecture. It also explains the history of the style and the history of social housing in the Netherlands.

Where to see Amsterdam School architecture

There are many examples of Amsterdam School architecture. Neighborhoods De Baarsjes, Oud-Zuid, De Pijp, and Rivierenbuurt are built in this style. It’s beautiful to see the little details in the architecture: from the street lights, mailbox, doorbells, house numbers but also the interior design: the furniture, clocks, and carpet.

You can download a map of all the locations.

The Pijp (south side) – housing complex De Dageraad
P.L. Takstraat/Burgemeester Tellegenstraat
A visitors centre for De Dageraad is located Burgemeester Tellengenstraat 128.
Open on Friday, Saturday and Sunday from 11 Am tot 5 PM.
There is a small library (free entrance) and friendly staff to explain.
Check website for guided tours.