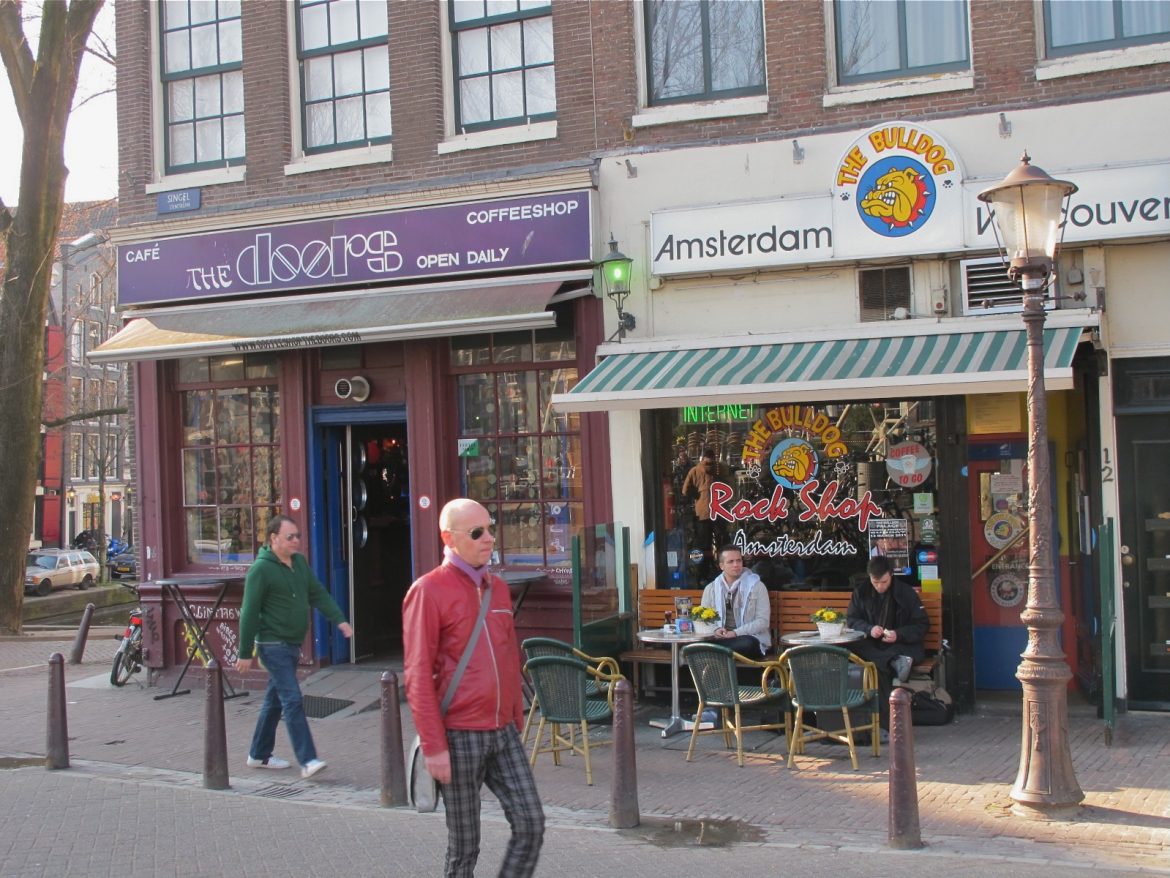 In The Netherlands, the selling of weed is tolerated. So-called ‘coffee shops’ sell marihuana. There is no pass system in Amsterdam, tourists can also buy pot and hash. But there are rules in coffeeshops, for example, that a person must be over 18 to buy.

1. Can I smoke in cannabis cafés and hash bars?

The smoking of drugs like cannabis and hash is not legal but tolerated in Amsterdam. You can freely buy and smoke up to 5 grams of hash, weed, pot, cannabis, and marijuana in special hash bars, known as coffee shops. You may smoke cannabis openly in the streets in Amsterdam. There are about 160 coffeeshops in Amsterdam.

2. Can I smoke pot in the streets in Amsterdam?

In general, there will not be any problem when you smoke pot in the streets of Amsterdam. But lighting a joint on the terrace of café or bar in Amsterdam is not allowed in most bars. The restaurant or bar itself does not allow it.

2. What are the Amsterdam coffee shop smoking rules in 2020?

The Amsterdam coffee shops need to have a license to sell marihuana and hasj. Hasj bars also need to abide by certain rules. If they don’t obey the coffee shop rules of Amsterdam, they can be closed.

3. Is weed legal in Amsterdam?

Pot, weed, marijuana and hash are free to consume in Amsterdam, as long as it’s clear it is meant for you personally. This means you may carry no more than 5 grams in your pocket.

Strictly speaking, weed is not legal in Amsterdam. If you are caught carrying between 5 and 30 grams you can get fined € 75. Carrying more than 30 grams of weed in Amsterdam is a crime. You can get up to two years in prison and/or a fine of  € 16.750,-.

Serious drug dealing like large scale production or importing or exporting marijuana can lead up to four years in prison and fines up to € 67.000 in The Netherlands. All other drugs, like XTC, cocaine or crack are just as illegal as in any other country.

4. How much is weed in Amsterdam?

The prices of weed and hash in Amsterdam vary from € 6 per gram to € 20 and more. The coffee shops have many varieties for sale and there is always a menu available.

Candy with THC is not for sale in The Netherlands. The lollies and candy ‘with marihuana’ they sell at souvenir shops don’t have any THC (the working ingredient) in them.

5. How do coffee shops get their weed?

Coffee shops are allowed to sell cannabis and hash, but officially, they are not allowed to buy.

Growing marihuana is also not allowed in Holland.

Amsterdam coffee shops have to sneak the drugs in through the back door. As soon as it’s inside the coffee shop, they’re safe.

This is called the ‘Amsterdam back-door policy’ on soft drugs.

All weed and hash that the Dutch coffee shops sell are grown and transported illegally. Most of the hash and pot are imported. The hash mostly comes from Morocco. Sometimes the names of the drugs on the menu tell you where it came from: Thai, Libanon, Afghan, Malawi, etc.

The Dutch weed comes from Dutch growers. Dutch weed is often grown indoors with artificial light and in greenhouses. A lot of the Dutch weed is very strong, with high levels of THC. Amsterdam coffeeshops sell mostly Moroccan hash.

In Dutch cities around the border of the Netherlands with Germany and Belgium, many foreigners cross the border just to buy pot in Dutch coffee shop. These cities say there are much crime and violence that is related to the drugs trafficking by tourists.

To tackle the disturbances, in 2011 the Dutch government decided that hash and marijuana may only be sold to a person living in Holland (Dutch residents). Customers will need to show ID and proof that are legal inhabitants of The Netherlands.

Amsterdam weed pass does not exist

In Amsterdam, the weed pass does not exist. Tourists and locals are free to buy weed in a coffee shop in Amsterdam.

7. How many coffee shops are there in Holland?

There are about 160 coffeeshops in Amsterdam. This about one-third of all the shops in Holland.

Since 2014, the distance between a school and coffee shop must be at least 350 meters. Because of that new rule, 43 coffee shops in Amsterdam had to close. A coffee shop can also be closed on the mayor’s orders when a coffee shop does not abide by the Dutch coffee shop laws. A coffee shop will always be closed by authorities when hard drugs like ecstasy or cocaine are found.

8. What is the oldest coffeeshop in Amsterdam?

The oldest, still existing coffee shop in Amsterdam is Coffeeshop Rusland. It was opened in 1975. It’s still at the same location. Another old shop is The Bulldog, also from 1975. The Bulldog now owns a large chain of coffeeshops in Amsterdam, including hotels and souvenir shops.

The first coffee shop in Amsterdam was Mellow Yellow in the 1970s (closed in 1978) (and Sarasani in Utrecht). The city council more or less accepted or tolerated the new cannabis bar in Amsterdam.

9. Why were coffee shops allowed in Amsterdam?

From around 1975 till 1990, drugs were a huge problem. Large amounts of hard drugs were flowing into the city (as everywhere else in the western world). Junkies addicted to heroin and cocaine swamped the area around the Red Light District: Zeedijk, Amsterdam Chinatown and the Dam, turning this area into a drug dealer paradise. Crime soured.

The Opium Act (1976) stated a strict distinction between soft drugs: hash and marijuana and hard drugs like cocaine and heroin. This law made it possible for more smoking houses to arise. For many years, Amsterdam was the only place in the world where you can smoke marihuana, although officially it has never been legal.

But since a few years, around the world, the laws against marihuana are not so strict. It is allowed to smoke in some states in America, in Uruquay and Canada (2018). Weed Advisor is for cannabis consumers.

10. Are XTC, GHB, LSD, speed and cocaine legal in Holland?

[…] NETHERLANDS Probably the most famous place in the world for smoking weed in public spaces, yet cannabis is actually an illegal class II drug in the Netherlands. The tolerance towards the ‘soft drug’ had been very high since the 1970s but in the 2000s things changed. There was a move to make the notorious coffee shops for Dutch people only with the introduction of a ‘weed pass’ (!!), but that crazy idea has not yet been officially introduced. Nonetheless, one source reports that 193 coffee shops have closed in Amsterdam since 1999 and the mayor of Amsterdam has decided that he will close 70 more in 2015. Read more here. […]

Hello every one and pot lovers :) I couldn’t help hearing about this tourist ban on cannabis in Holland the other day when listen to the radio and soon? and was wondering if any-body may know would it ever work !?? because I been to Amsterdam a few times and like any where else in the world money is money and the laws in Holland do seem more relax than I thought and the locals attitude towards them like the smoking ban for one,,,could this ever work with out me having to ask a stranger on the street!?!

sorry guys but “the dam” is a very expensive place for hash/grass now,and the hotels + transport are a ripoff also,i tried portugal last year, 3grams of nice “blonde” hash for 15 euro, cafes much cheaper than amsterdam, very nice,bobbo

It will save most of the tourist economy if the planned operations of licensing the pot do not happend..

Is it still possible to go to amsterdam and smoke at a coffeshop or is it only for dutch people now?

Don’t worry. The coffee shop pass has not been introduced and it it’s not sure at all if it will ever happen. Local governments strongly oppose the plans. At least until 2012 tourists will be able to smoke in coffee shops….

not so good for the economy per se

What about in 2012? When does the “weed pass” go into effect for Amsterdam?