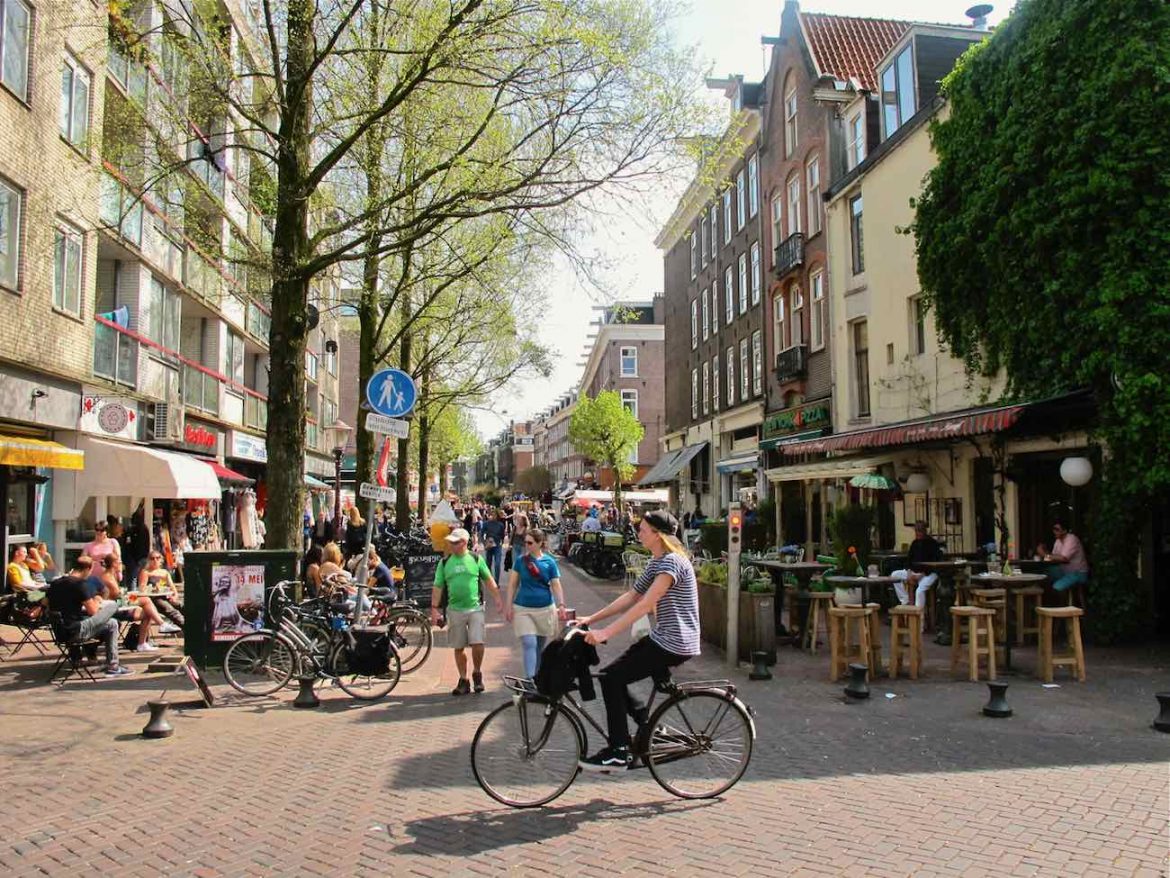 History and Architecture of De Pijp

The Amsterdam Pijp neighbourhood lies next to the Museum Square, enclosed by water. The two main streets are Ferdinand Bolstraat, which runs from Heineken Brewery right into the heart of De Pijp. Here you will also find the daily market Albert Cuyp, one of the most famous in Amsterdam

The other street is Centuurbaan which crosses Ferdinand Bolstraat. The Centuurbaan runs along the Sarphatipark all the way to the Amstel river. On the other side of Centuurbaan is the Nieuwe Pijp. De Pijp is easy to reach by metro.

Apart from the daily market, there are many small boutiques for fashion, vintage, designer, antiques and second-hand.

The old Heineken Brewery has been converted into a popular tourist attraction: the Heineken Experience. Touring the old brewery, you will learn the ins and outs of brewing beer.

The Albert Cuyp Market has been around since 1905. People from all over the Netherlands come to this typical Amsterdam daily market. Food and non-food items are for sale at the lively market.

Nowadays the Albert Cuyp is the place to try Dutch delicacies such as ‘poffertjes’, ‘stroopwafel’ and raw herring.

There are no clubs in De Pijp, only bars and cafés. Around ‘Gerard Douplein’ and the Marie-Heineken plein there are many bars and restaurants. And of course many, many ‘burger bars’.

Until 1870, De Pijp was an agricultural area. The street later known as Ferdinand Bol was lined with windmills. But the population grew fast in those years, so the city decided they needed to expand quickly. But instead of working out a grand plan, the city decided to sell the plots to whoever had the funds.

For the first time, banks started to give out mortgages to investors who saw building houses as a way of making good money fast. The investors used cheap materials to quickly build houses. De Pijp was built chaotically and in the worst way possible. We call this type of building ‘Revolution Architecture’. You can still the result of the Revolution Building in De Pijp. The street plan still follows the old waterways of the agricultural function it once had. The streets are very long.

The front side of typical Pijp houses are small, only 5 to 6 meters. But they are very deep, about 12 meters deep. The houses have 2 doors: one for the downstairs, where there is a shop or a house, and one for the staircase that leads upstairs.

The houses have 3 windows. The staircases are super narrow, the rooms are very small, there is bad isolation against humidity, cold, and noise. Only one small balcony to dry laundry.

The floors are divided up into two separate apartments (front room and back room), each 25 m2 in size. A family of 5 or 7 people lived here in tiny, humid, and dark rooms. De Pijp was not as poor as the Jordaan District though. The people who lived here owned small businesses were students or worked for the government, like policemen, teachers, or government workers.

Still, the area, then known as YY, was ridiculed in the newspapers as a place you had to get out of as quickly as possible. Some buildings had started to collapse shortly after they were finished.

The Pijp’s cheap and poor-quality housing attracted the bohemians of the city: drunks, dreamers, pioneers, and prostitutes. Beerhouses and cheap hostels organized all sorts of clandestine entertainment.

The Pijp was soon known for its prostitutes. Along the Sarphatipark there were many brothels. Here, whores rented rooms for their customers for a short time. You can still find the remnants of this history along the Ruysdaelkade, where up to this day, prostitutes offer their services behind red-lit windows. This was also the time and place a new literary movement started, called the Eightiers (Tachtigers).

Many immigrants looking for a better life settled in De Pijp. First, Jewish families. Remnants are the synagogue located at Gerard Doustraat and the beautiful diamond cutter of Asscher (see Nieuwe Pijp) In the 60s of the 20th-century Spanish people, employed in the Heineken brewery arrived.

De Nieuwe Pijp is the part of De Pijp that lies south of Van der Helstplein. This part was built as a part of a large-scale city plan made by famous Dutch architect Berlage in 1917, Plan Zuid.

The New Pijp is known for its expressionist Amsterdam School architecture. The best-known example is the monumental building De Dageraad. De Dageraad is a complex of several buildings made by Dutch architects Michel de Klerk en Piet Kramer on order by socialist housing corporation De Dageraad.

The architects believed in the socialist principles of their clients. The aesthetically responsible housing would contribute to the uplifting of the working class. Inside, the houses had 3 or 4 rooms, a huge improvement. But the houses were not very functional. Aesthetics played a more important role than functionality.

Visitors Centre De Dageraad
De Dageraad has its own Visitors Centre, free to visit Friday, Saturday and Sunday between 11am-5pm. Excursions in the area are organised by Museum Het Schip.

One of the most famous novel in Dutch literature takes part in this neighourhood: De Avonden. Writer Gerard Reve lived on number 415 of Jozef Israelskade, corner with Diamantstraat, with his parents. Here he wrote his famous book in 1947.

The whole area is nice for a walk around because there are so many remarkable buildings and monuments. The ‘workers’ palaces’ you can recognize by their vertical lines and yellow-green window seels.

The monumental building of Diamond cutter Asscher is worth a look. The factory dates back to 1907. The Asscher Factory made world news in 1908 when the British King Edward VII ordered the diamond cutter Abraham Asscher to polish the Cullinan, the biggest and most famous diamond in the world.

In the best years, there were 300 people working in this factory, most of whom live in the Diamond Neighbourhood. Abraham Asscher was not religious, but felt very connected to the Jewish community and fulfilled many public functions in Jewish organizations. Asscher returned from concentration camp Bergen-Belsen after the war, mentally destroyed and cut all ties with the Jewish community.

In the center of the Diamond Neighbourhood stands the Bathhouse. Originally, this was the local bathhouse, a place where people came to get a bath before houses were equipped with a shower.

A part of the Diamond Neighbourhood in De Pijp Amsterdam consists of small workers’ houses, crated by architect A.L van Gendt. They were built in the 1890s as model houses for workers in the then agricultural area. This area is now a national monument.

The building known as Cinétol is totally different from the Amsterdam School architecture. It’s built in the style of the New Building (Het Nieuwe Bouwen). Cinétol is the former temple of the Theosophical Society, built in 1927. Typical for the theosophical movement is the many geometrical figures like circles and triangles.

Unfortunately, Krishnamurti, seen as the reincarnation of Christ, left the movement shortly after the building was finished, thereby creating a split in its followers and a descent in its numbers. During and after the war Cinétol became a cinema. Nowadays it’s a public library with some archives of the old theosophical movement.

Although I have been in De Pijp a few times, on many visits to A’Dam, it has always been when I have deliberately got lost in order to find something new.
Until I read this article, I had no idea where I had been but recognise a lot of the sights.
So next time (which is pretty soon, in September) I will experience it ‘in context’.

Thank you very much for this introduction!

Hi, me and my girlfriend recently visited Amsterdam, we loved it and now I can’t get enough reading this blog :) Well done! I wish I stumbled upon it before we went there.

Thank you for all the time you dedicated to write this up. Although I didn’t see too much of Amsterdam, I agree with your opinions and “feeling” regarding the well-known touristy attractions. We had a 4 days stay and somehow every day we found ourselves avoiding the center part of the city. We didn’t even see the Red Light District after 8 pm, and we don’t regret it. We stayed in De Pijp, we liked the Jordaan very much and we also enjoyed walking in the Plantage area. I also wish I knew dutch so I could enjoy ALL the books in the Public Library – we found it to be an amazing place to spend your time in.

Here are some suggestions for your site:

– I think there is a problem with this link https://whatsupwithamsterdam.com/red-light-district/ – the post title is the same as the category name and you can’t access the post.

– in this post, maybe you can add a reference in the Nightlife section to CC Muziekcafe (www.cccafe.nl), a very nice, small bar with live music (a dying breed in AMS, as I was told by the bartender) that’s open until 1 am. We had a good night there dancing to live music and made friends with the (few) people there.

Thank you very much for your feedback. I’m glad I could help you. And thanks for helping me, I have made the necessary changes.