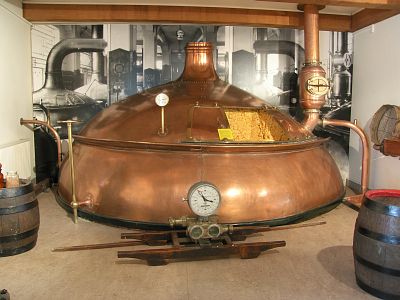 Dutch beer has a long history. From the Middle Ages until now, Amsterdam people have always loved the golden grain juice. In fact, in Holland, they drank beer like water! Heineken was Holland’s most famous beer brand for a long time.

12 Facts about Dutch beer from Amsterdam

In the Middle Ages, Amsterdam inhabitants drank beer instead of water. Even children. The reason was that people did not have clean drinking water. Milk turns sour quickly. Only beer was safe to drink. The beer did not contain as much alcohol as today. But it must have been a cheerful city!

2. There were over 100 different beer breweries in Amsterdam

Because beer was the only drink there was, each village had its own beer brewery. A large city like Amsterdam would have over 100 different beer breweries. The beer was brewed at home by women and in monasteries and convents by monks and nuns.

3. Amsterdam had a monopoly in the beer trade

Dutch people drink a lot of beer but if we look at the statistics, The Netherlands doesn’t even make it into the top 10! In The Netherlands, a person drinks on average 74 liters of beer a year. You’ll find the world’s biggest beer drinkers in the Czech Republic (132 liters pp), Germany (107), Austria (106) and Ireland (104).

5. Dutch draft beer has a layer of foam

Dutch beer from tap always comes with a layer of white foam (‘schuim’). The foam (two fingers thick!) protects the beer from oxygen, to make sure gas doesn’t fade. Also, oxygen from the air affects the taste of the beer. When the foam is gone, in Dutch we say that the ‘beer is dead’. It is not as tasty anymore. To make sure that the beer doesn’t go dead before you have finished it, Dutch beer is served in small glasses.

6. A Dutch beer comes in many different sizes

In Amsterdam, nowadays, pints (half a liter of a liter) are also served, mostly to tourists. Traditionally though, beer in Amsterdam is served in 3 types of glasses:

7. How to ask for a beer in Holland

To ask for a normal beer on draught in Holland, you can ask for a biertje or pilsje. In Belgium you ask for a pintje. So: ‘Mag ik een biertje?’ (‘mock eek an beertjah?‘)

In the 1980s the squat scene ruled Amsterdam. The anarchists and punkers refused to drink Heineken Bier. This demand sparked a new incentive for small, independent beer breweries. In the last 15 years, there’s been a wave of new, small beer breweries starting in Amsterdam.

These new Dutch beer breweries often open for visitors and for tasting:

9. There is a Dutch beer for every season

At the moment there are over 125 beer breweries in The Netherlands. 8 of them produce 99 % of the Dutch beers. The remaining 1% are small breweries producing beers. There are around 750 different small beer brands, mostly ‘special beers’.

In The Netherlands, small and large breweries come up with new beers every year. Many of them are made specifically for the time of year, so-called seasonal beers. There are only available during a short period.

Lentebok is a light, blond, fresh beer served in spring. A famous beer in Spring is Lentebier by Jopen, a brewery from Haarlem. It’s a heavy beer, with 7% alcohol and slightly sweet.

In summer, white beers (witbier) are popular. Most big breweries serve their version. White beer tastes slightly sour and is cloudy. A favorite Amsterdam witbier is from Brouwerij ‘t IJ, which many local Amsterdam cafés serve on tap.

The most popular and famous seasonal beer is herfstbok, a beer for autumn. Herfstbok beer is dark, bittersweet and does not contain much alcohol. Traditionally, bokbier is bottom-fermented, but modern bokbier tends to be a heavier bottom-fermented beer. Beer breweries in The Netherlands vary their herfstbok every year.

Belgian beer is famous all over the world because of its wide range of beers. In many Belgian cafés, there is a remarkable large choice of beers on tap and on the bottle. Every beer has to be served in its specific temperature, with its own level of foam and served in a glass made for this specific beer. All to get its taste. The taste of Belgian beer is generally heavy, with a sweet-bitter taste.

There is no other country in the world that has so many different kinds of beers, though in recent years many small breweries have disappeared. Every year, Belgian beers rank high in the “best beer of the world” competitions. The Trappist beer Westvleteren has won already twice the price for the best beer in the world.

11. The story of Heineken

Heineken owns around 50% of the Dutch beer market. It’s the 3rd largest brewer in the world, producing beer in over 140 breweries in over 70 countries. Heineken was founded in Amsterdam in 1864.

Heineken has become big by pursuing an aggressive strategy. After the 2nd World War Heineken bought many small competing breweries and then closed them down, leaving a bigger market for Heineken. As a result, the rich and varied Dutch beer culture disappeared. Also, Heineken focused much on export. Heineken beer is one of the most successful imported beer of the United States. In 1968 Heineken merged with Amstel.

The Heineken Brewery in Amsterdam in the neighbourhood of De Pijp stopped brewing beer in 1980. The remaining main hall is a national monument. Heineken Experience is one of Amsterdam’s biggest tourist attractions.

12. The kidnapping of Freddy Heineken

In 1983, Alfred Heineken, owner, and director of Heineken was famously kidnapped together with his driver Ab Doderer. Though a ransom of 35 million guilders (16 million euro) was paid, they were not released. Later, after an anonymous tip, the two men were found (alive) in the Amsterdam West port area. Part of the money was found later as well. Eventually, all of the kidnappers were found and sentenced to prison. The Heineken kidnapping was followed closely by the media.

In 2011, a film was made about the kidnapping starring Dutch movie heroe Rutger Hauer as Freddy Heineken.