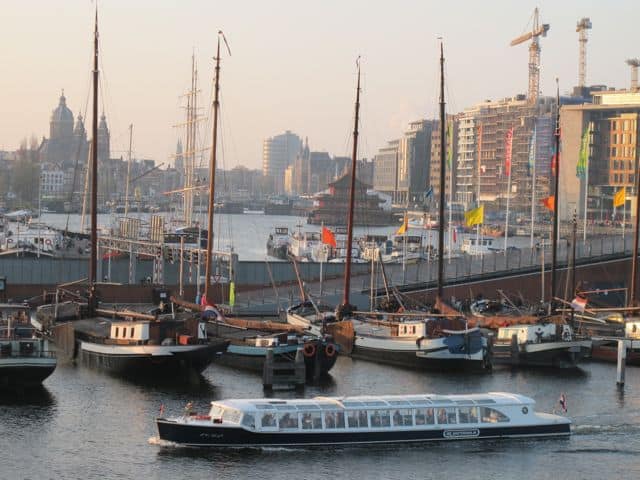 Just East of Amsterdam Central Station, there is some interesting architecture: the Amsterdam Doubletree hotel, the public library OB, the Amsterdam music conservatory and Science Museum Nemo. Follow the instructions in the article and you’ll enjoy a nice Architecture Amsterdam tour.

This tour takes about 45 minutes walking.

Standing with your back toward Central Station, go left, towards the east. Follow the no-cars walking /biking zone and bridges and watch the new buildings in this recently developed area.

The east of Central station has undergone a complete metamorphosis. All of the old buildings have been torn down. The first building you will see is the Doubletree Hotel.

Following the bridge, you’ll find the floating Chinese restaurant on your right. The Sea Palace is the first floating restaurant in Europe. It has been moored here since 1984. With its Chinese kitsch interior and it’s over the top décor you can enjoy a real ‘Dutch Chinese’ meal.

The Public Library of Amsterdam

At Oosterdok there is also the Public Library of Amsterdam (OBA). Entrance is free. It’s a beautifully designed building, with large open spaces and fantastic views on Amsterdam from the top floors.

Next to the library is the Amsterdam Conservatory.  The glass building was opened in 2008 by Queen Beatrix. The design was inspired by Japanese houses. The halls and stairs are all on the outside of the building. The rooms are in the centre of the building. This way, the music students will not be disturbed by outside noises. There are free concerts by young talented students.

Now, you can take either of the two bridges. One goes towards Nemo Science Center. The copper green ship-like design was opened in 1997. It stands on top of the IJ-tunnel. The building was designed by Italian architect Renzo Piano. The roof of the building is a large and very sunny terrace which in summer has been made into an entertaining city beach.

The other smaller, ‘turning bridge’ leads you to Hanneke’s Boom, a popular bar and restaurant. The spot has been known as Hanneke Boom (Hannekes Tree) for centuries. The spot marked the entrance of the old Amsterdam harbor (Oosterdok).

At night, the entrance would be barred by letting a tree float in the water. Hence the name Hannekes Tree. The ‘new’ restaurant has been built solely out of recycled building material.

From the Nemo Science Center you can turn into the city again. Crossing the main road and walk along the Oude Schans canal.

An old tower sits on the canal. It’s the Montelbaanstoren. Originally the Amsterdam tower Montelbaan was built as a defense of the city in 1516.

Because of the unpredictable tower bells (they would spontaneously start to play at random times), the tower is is named Crazy Jaap. Even Rembrandt liked this crazy tower, as he painted it. Now turn right and you will walk right into the Nieuwmarket area.

This is the end of the East Architecture Amsterdam Tour.