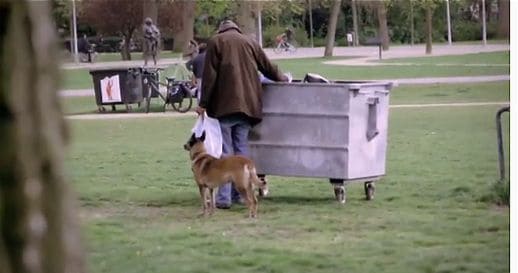 THIS ARTICLE WAS UPDATED NOVEMBER 2021

Many people visiting Amsterdam are surprised to see there are not many homeless people in the streets. In many European countries, there are many homeless people in the streets. In The Netherlands, the social system should prevent people from becoming homeless, but still the amount of homeless in Holland are on the rise. Winters in Amsterdam are very cold. In the winter of 2020-2021, the council of Amsterdam offers shelter for all homeless on days when it is really cold.

How many homeless people are there in Amsterdam?

According to the GGD, 500 to 1000 people are homeless in Amsterdam. (Total inhabitants are 800.000). Is this a lot? It’s difficult to tell because countries have different ways of counting their homeless. Besides that, it’s obviously rather difficult to count the homeless, as they are not registered. In Belgian Antwerp (510.000 inhabitants), they count 500 homeless. The amount of homeless people in Amsterdam has risen sharply in the last 10 years.

Where can homeless people in Amsterdam find shelter?

In Amsterdam, homeless people may find a warm place to rest during the daytime at an ‘inloophuis’. Find a list of inloophuizen in Amsterdam.

At an Amsterdam inloophuis, people can use the toilet and shower. There is coffee available. Often there is food and activities like games and tv. Everyone is free to walk in, but in corona-times, there are limitations on the number of people inside.

Where can homeless people sleep in Amsterdam?

From 2021, shelter for the homeless is coordinated by the new Buurtteams. There are local Buurtteams all over Amsterdam. Find a local branche of Buurtteam.

The Buurtteam can appoint you to the ‘nachtopvang’ or ‘kortdurende opvang’. It is only accessible for people who are vulnerable. Generally, shelters in Amsterdam only take in people who have been in the city for a longer period (more than 3 months). If you have just arrived, you are supposed to arrange your own accommodation. In any case, expect a screening and a waiting list.

An easy and accessible shelter for all homeless in Amsterdam, without any screening, is the Stoelenproject at Marnixstraat 248. It is below the large car park. Everyone may spend the night here. Mondays and Thursdays from 8.00 – 9.00 free tickets are handed to the neediest. The entrance is from 18.00 until 21.00 hours. You sleep on a mattress on the floor in an open space. A meal and sandwiches in the morning are included.

Where can homeless people in Amsterdam sleep in winter?

In winter, there is a special shelter for the homeless in Amsterdam. This arrangement is called ‘winterkouderegeling. The shelter is only open when the weather is really cold. Report on these days at Transformatorweg 6. Check if it’s open at amsterdam.nl/daklozen.

Where can I stay if I have no legal papers?

Undocumented people may not stay at many of the official shelters. For them, there are special 24-hour shelters. Asylum seekers who were not granted permits, may find shelter there.

Does the Dutch government give financial help to homeless people?

All people with Dutch residency who have no income nor property can get social welfare payment. (In Dutch ‘bijstandsuitkering’ or WWB). The basic payment (single, no kids, no income, no property) is about € 1080,00 per month. When you are homeless, the process to apply for social benefits is more complicated but doable.

Where can women find shelter in Amsterdam?

For women (with or without papers) who have been a victim of domestic or sexual violence can find accommodation in a woman’s shelter.

Why are there not many homeless people in the streets in Amsterdam?

If you walk out of any train station in European cities like Madrid, Paris, or London, the streets are filled with homeless people, beggars, junkies, and alcoholics. In Amsterdam, you will hardly find any. The reason is a policy that the 4 largest cities in The Netherlands (Amsterdam, Rotterdam, Den Haag, and Utrecht) and the Dutch government implemented in 2006 to get homeless people off the streets.

In the first phase of the project, from 2006 – 2010, over 10.000 people who were living in the streets were offered personal assistance in finding medical care, tackling addictions and treating psychological problems. All those who took the offer got free accommodation. Over 5.500 people found a more stable lifestyle with an income and a roof over their heads.

Screaming homeless with heavy psychiatric disorders
The results were noticeable. In October 2008, the streets of the 4 large cities had lost 6.500 homeless people. Classic urban sights such as drug users, screaming homeless with heavy psychiatric disorders, beggars, petty thieves, homeless prostitutes, all once a common sight in Amsterdam, had more or less disappeared from the Amsterdam view. The project cost €175 million. It was calculated each invested euro saved 2-3 euros.

How many young people are homeless in The Netherlands?

In 2016 until 2018 there were 315 young people homeless (between 18 and 23 years old) in Amsterdam. Youngsters under the age of 18 you will not likely find sleeping in the streets of Amsterdam because they will be taken into the care of Bureau Jeugdzorg.

So there are no more homeless people in Amsterdam?

Are you allowed to sleep in the streets in Amsterdam?

No, it’s not allowed to sleep outside in Amsterdam (nor in your car). If you sleep on a park bench, the police can arrest you. You will be spending the night in jail. It’s not likely the police will actually arrest you unless you cause a disturbance.

Hi,I have a friend that is from Romania is a bit handicap and live for 7 years in Amsterdam with some friends,before one year they put him out .
He start to take bijstanduitkering and live at Red Cross house,
but because his not apply to some letters he go to court and they ask back the money and also unregistered for the city and put him out for the shelter.
That is really crazy,the guy is Hive and really sick and now live in the street..
If someone can help with everything or to give Advice to what have to do I will be grateful..

Is not true that the government helps every citizen who is homeless. This help does not apply for entrepreneurs who due to crisis have lost their homes.
Im an entrepreneur, im still trying to keep my little business running because I need to survive, I also work part time in a restaurant but I cant afford to rent a room a place, if I ask the government for help I always get the same answer, there is no help for people who holds a business registered at the Kvk (Chamber of Commerce), so basically they only help people with no house with no job etc..in this country if you want to fight to progress, not to be a burden all the way for the government, you get absolutely no support.