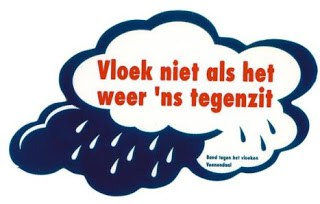 If you drive a bicycle in Amsterdam, you’ve probably been called some bad names in Dutch, without even knowing it. If you are curious what Dutch swear words mean and how to swear in Dutch, you can check out the list below.

If you want to use some of the words, tread very, very carefully. Especially in Amsterdam, swearing comes naturally for the locals and is often done with a tongue-in-cheek style that can be easy to miss and even more difficult to imitate.

When a foreigner tries to swear these Dutch swear words come across much harsher, especially when you don’t use the correct accent and tone of voice. Use this list with caution and drive safely!

Godverdomme is probably the first Dutch swear word any Dutch person will teach you. It’s rather difficult to pronounce, but very satisfying to say. Godverdomme is the Dutch word for Goddamn, it’s a strong curse word that is certainly not popular among Christians.

Below you can watch a funny clip of a Belgian hiker on his pilgrimage to Santiago de Compostela. He loses his temper when his mobile phone fails.

In Holland, we use the word kut not often for a person. Dutch people say ‘kut’ when something small goes wrong: you hurt yourself or forget something.

You can, however, use it as an insult for a woman: stomme kut! (daft cunt!) Trut is generally used when a woman does something stupid or mean.

Best translated as ‘fuck off’, Kolere and rot op both mean the same thing. Kolera (also klere; klerelijer) is a word that stems from cholera, a disease that spread across Europe in the mid-1800s. The infection spread quickly by contaminated water. In 1866 over 1151 people in Amsterdam died of cholera.

The Dutch curse Krijg de kolere is pronounced with a strong Amsterdam accent. The accent orginally stems from the Jordaan Quarter in Amsterdam. The phrase was made famous due to the movie (and title song of) Ciske de Rat. Ciske is a young boy growing up in the hardship of poverty-stricken Amsterdam. He shouts Krijg de kolere! to his abusive mother just before he kills her in a fit of rage.

In the movie theme, the young Ciske sings this expression as well.

Other uses of the word kolere:
Kolerelijer! (sufferer of cholera)
Wat een klerezooi (what a mess)

Meaning ‘watch out’ kijk uit je doppen uses an old Amsterdam word for eyes: doppen. So literally this word means ‘lookout from your eyes’. A dop is literally a cap or lid.

Doppen is also used in the Dutch phrase boontjes doppen: taking the ends off green beans. The expression zijn eigen boontjes doppen means ‘taking his affairs in his own hands’, not using the help of others.

Trut is a rather common insult for a woman. You can also use doos. Kijk uit je doppen, doos!

A popular Amsterdam word to say ‘go away’ is opzoute! (the (n) is unpronounced). It’s also used for third, unidentified persons: Laat ze opzoute! (in british: let them piss off) or a specific person: Eberhard moet opzoute! (Eberhard, -Amsterdam mayor- must fuck off).

A rather rhetorical question, used only for the more advanced Dutch speakers, is Ben je gek!? In Amsterdam we use the more advance Ben je helemaal besodemieterd! Are you out of your mind, are you crazy?

Literally, when you are besodemieterd, it means you have been deceived. In this way, the very famous Dutch singer Marco Borsato uses it in the (well known) song Ik leef niet meer voor jou.

Translation:
You have lied to me without remorse
You’ve double-crossed me and deceived me
So dry the tears in your eyes now
I don’t live for you anymore

The entire song has nice, familiarised Dutch expressions, look for lyrics, translation in English and the song here.

As we have seen, lijer is sufferer, so someone who is kapsoneslijer is suffering from kapsones, a typically Amsterdam slang word. When someone has kapsones, it means his ego is too big, he has too much pride or is arrogant, has pretenses. So if someone tells you you are a kapsoneslijer, it’s not good!

In English, you would use the expression ‘don’t be a pain in the ass’ to translate Zit niet zo te zeiken. I have used the word ‘ass’ instead of ‘neck’, because zeiken is a very rude Dutch swear word and it’s not to be used for any of your friends.

In the dictionary, you might find ‘zeiken’ as a word for to delay or put off, but it’s really not used in this way in everyday life.

Literally, zeiken means to pee/piss. Ik moet zeiken is a (very!) vulgar and seedy way to say that you have to use the toilet.

Het kan mij geen (ene) reet schelen means I don’t give a fuck. Yes, it’s vulgar, so it means you really, really do not care. Reet is a vulgar Dutch swear word for ‘ass’.

So from that, we can distill more vulgar Dutch expressions: lik me reet (kiss my ass, literally lick my ass). Het zal me de reet roesten ( I don’t care). Je kan me reet likken (you can kiss my ass). Ik vind er geen reet aan. (I don’t like it at all.) Amme reet! (I won’t do it).

On a more positive use, you can also stick a feather in someone’s ass (Een veer in iemand’s reet steken) and then you make someone a compliment!

Eikel, lul, klootzak, and klojo are more or less the same, meaning asshole or dickhead, really a rather unpleasant man. In Amsterdam, these terms are used freely and easily, especially in traffic.

Kankerlijer (sufferer of cancer) is also popular and comes from the popular use in Dutch of diseases in swear words. In this category also falls teringlijer.

The words muts (wollen hat), doos (box, slang for vagina) and kuttekop (vagina head) are used to insult women. (with or without the prefix stomme -stupid. The British ‘You old cow!’ comes close to the meaning.

Wijf (slang for ‘woman’) has positive and negative uses in Amsterdam (lekker wijf is vulgar for ‘attractive girl), but the different uses are very subtle, so using these Dutch swear words are only for the advanced.

Is ‘Holland’ and ‘The Netherlands’ the same?

Why are Amsterdam houses crooked?

Important detail, an ‘eikel’ is not just a dickhead, it also means acorn.
And it’s the medical term for the tip of the penis (dickhead) as well.
Just pick up an acorn (with the cap still on if you’re western, without the little cap if you’re muslim or jewish) turn it upside down, with the bottompart facing up and you’ll see why it’s called the same name.

“Cunt” is a very offensive word in the UK too, at least in Southern England

Is ‘Holland’ and ‘The Netherlands’ the...

Why are the houses in Amsterdam...