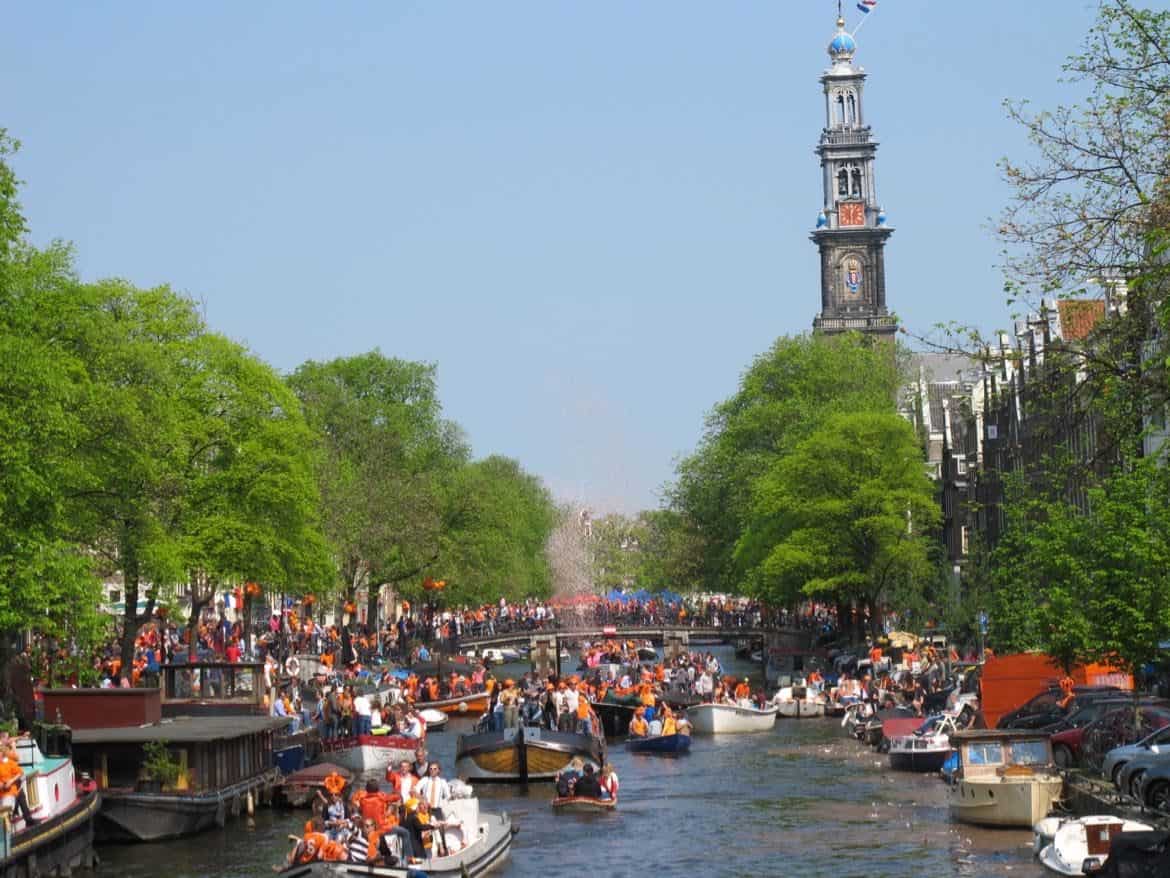 King’s Day in The Netherlands is celebrated on 27 April 2020. The best King’s Day parties are in Amsterdam. Over 1 million people take to the streets. Dressed up in orange, they party for 2 days and nights.

In Amsterdam, King’s Day is best known for its free open-air market. The entire city becomes one big flea market as people take out their old rubbish and try to sell it. This is the ‘Vrijmarkt’.  Everywhere you walk, the streets are lined with people selling clothes, houseware, books and records and homemade pies and other food.

The Haarlemmerstraat and The Jordaan Quarter are popular areas, busy from early morning, with people scavenging the streets for bargains. At Westerstraat, Noordermarkt and Lindengracht at Jordaan stages have been set up for live music and DJ’s and there are outside bars. The Gay Monument (Homomonument) at Westerkerk is traditionally set up with a stage for drag queens and dancers.

Vondelpark is for children

For a little more peace, head into the Vondelpark. At King’s Day in Amsterdam, children rule the Vondelpark. The park turns into an open-air flea market where only children are allowed to sell. Children are also happy to take out their musical instruments, show their dancing skills or do some gymnastics, hoping to earn some small money.

King’s Day dance parties in Amsterdam start on the evening of 26 April 2020 and continue until the early morning of 28 April. Many dance parties parties and techno raves are held outdoor at special venues outside the inner city or inside in clubs and venues.

Is everything closed on King’s Day?

Most of the museums are closed on King’s Day in Amsterdam. But the big tourist attractions are open: Anne Frank House, Van Gogh Museum, Rijksmuseum and Stedelijk Museum are open. Shops will closed, except supermarkets around the center that tend to be open.

The center of Amsterdam will be closed for both cars and trams. That means from around 7.30 am till around 23.00, there is no public transport at all on King’s Day. You need to walk. Trams outside the center will function but usually take a different route. About 200.000 people arrive in Amsterdam by train (central station) to celebrate King’s Day.

Hey guys,
I am new to Europe and I am currently living in Barcelona. However, I would love to attend the King’s day in Amsterday. However, I have no idea how to get there and would also love to know if I can go with someone organises it, so I dont end up alone.

Hi, we are thinking of hiring a boat for the day on Queens Day 2012 for around 30 people and would need a skipper to drive the boat.