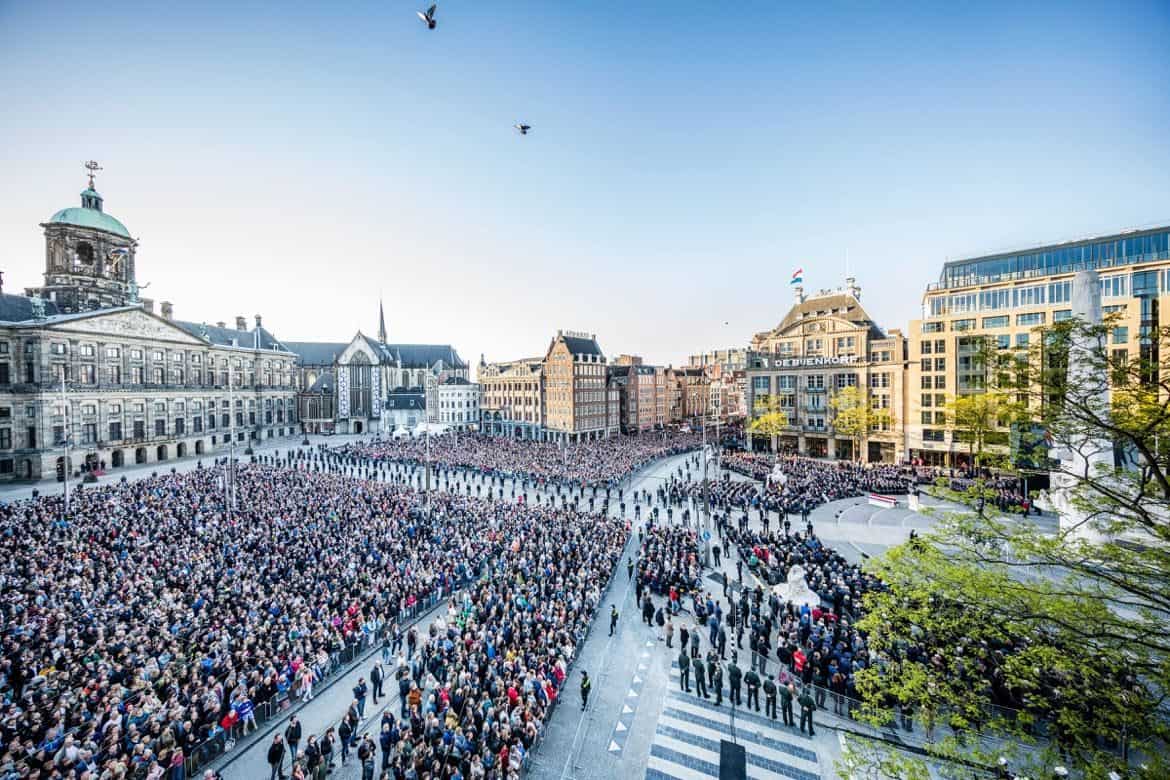 On 4 and 5 May, The Netherlands commemorates the end of the Second World War. In May 1945 Canadian forces ended a 5 five year occupation of The Netherlands by Hitler Germany. The National Memorial Ceremony (Nationale Herdenking) is on May 4 at Dam Square in Amsterdam. The liberation of Holland is celebrated on ‘Bevrijdingsdag’: May 5 with a Liberation Festival and more activities.

May 4 is the official Dutch National Remembrance Day (‘Nationale Dodenherdenking’). On this day, the Netherlands commemorates the fallen soldiers of World War II and those that died in other military conflicts and peacekeeping operations.

On May 4, schoolchildren visit war monuments to learn about the Second World War. At 8 pm (20.00), a nationwide two-minute silence is held. In Amsterdam, Dutch King Willem Alexander heads the official memorial ceremony at the National Monument on Dam square.

On May 5 it is Bevrijdingsdag (Liberation Day) in The Netherlands and the festivities take a more upbeat swing. In many cities free open-air music festivals are organized. These so-called ‘Bevrijdingsfestivals’ (Liberation Festivals) intent to teach young people to appreciate the freedom and democratic society in which we live. Apart from performances, the program is added with speeches.

In 2020, in Amsterdam, the Bevrijdingsfestival is called Het Vrije Westen and it takes place at the Westergasfabriek. The event is free to visit for everyone. There are music performances and food and drink are available. There is also a program for children.

More things to do on Liberation Day

Apart from the Bevrijdingsfestival, there are many other events organized on Liberation Day in Amsterdam in 2019: a silent walk, ‘Freedom Meals”, theatre, old Jewish homes that open for the public, homes of people from the resistance, films, concerts, and special tours. The activities are all in Dutch.

Concert on the Amstel river

Liberation Day in Amsterdam is closed with a classical music concert on the Amstel river. Also, popular Dutch artists play. The concert is attended by the King and Queen of The Netherlands, Willem-Alexander and Maxima.

The liberation of Amsterdam actually took a rather morbid turn in those first days of May of 1945. On May 7, the official retreat of the Germans was announced and, to celebrate, thousands of people gathered at Dam Square. The celebration came to a dramatic halt when suddenly, German soldiers located at a high top building, started shooting at the crowd, killing 20 people and injuring 120.

A man belonging to the Dutch resistance climbed the tower in a desperate attempt to end the shooting. Ultimately, he, and a German officer, convinced the Germans to stop the killing. The dramatic events were captured on video at the website of the Dutch National Archives. Two days later, the Canadians finally entered the city, making the liberation a fact.