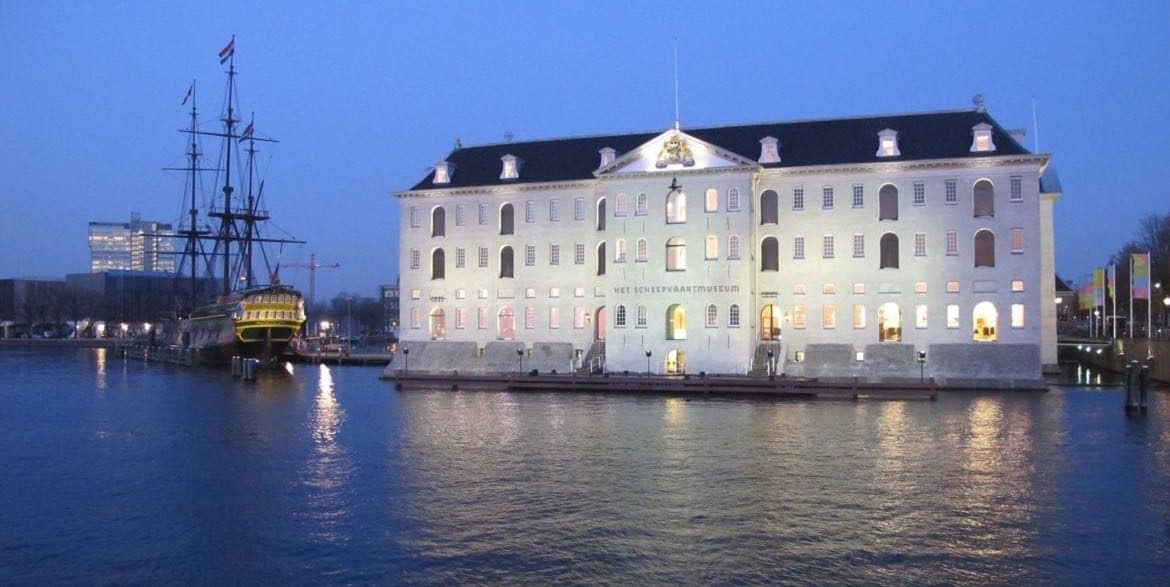 The National Maritime Museum, (or in Dutch Scheepvaartmuseum) is best known for its life-size VOC-replica ship. It’s great fun for kids and adults to run around on board the 17th-century vessel. The many interactive features of the Maritime Museum and the architecture of the old navy warehouse makes exploring the long naval history of Holland a fun and interesting experience.

The maritime history of Amsterdam

The Maritime Museum in Amsterdam is located at an old naval warehouse. For centuries, the military navy of Amsterdam kept its canons, ropes, and supplies in this huge building. In the middle is a spacious courtyard. This courtyard is now roofed with a spectacular glass ceiling. The ceiling is decorated with 868 individually adjustable LED lights. The colorful light show is great (and free) to watch after sunset (only applicable in winter).

The museum still breathes the air of all those years. Dark hallways lead you along dimly lit rooms with mysterious sea maps, compasses, silver and porcelain from the seafaring era. The museum holds a great collection of yacht models with fantastic replicas of old and new ships: from small fishing boats to 21st-century cruise ships, all remarkably detailed.

The use of video and other modern technology push the Amsterdam Maritime Museum into the 21st century. For example, there is an interactive globe that allows visitors to ‘travel’ through 400 years of nautical charts.

In another area, there are 4 video screens around. The visitor becomes the ‘product’ that is shipped and transported to the supermarket. This can give you a feel of how big the actual Amsterdam port is and the complexity of the logistics involved.

Still, the best feature of the Maritime Museum is the Amsterdam VOC-ship.  It’s an exact copy of the Dutch East India Company Ship. The original ship did not do much seafaring, as it sunk on its maiden voyage in 1749.

You can climb on board the East Indiaman called ‘Amsterdam’ and wander around. The interior will give you an idea of how seamen in the colonial era lived during an 8 months trip to the East (India, Indonesia).

On board the East Indiaman Amsterdam you can experience Dare to Discover. This is a virtual reality journey that transports visitors back to the 17th century. This was the time when Amsterdam was the world’s largest port and the Netherlands was a world power. You will witness a number of unique happenings from those days such as the construction of the Zeemagazijn – now home to Het Scheepvaartmuseum – and the building of warships on the shipyard premises.

Trailer ‘Dare to Discover | A VR Journey’ from Het Scheepvaartmuseum on Vimeo.

How to get to the Maritime Museum

A secret gem in Amsterdam: Museum...