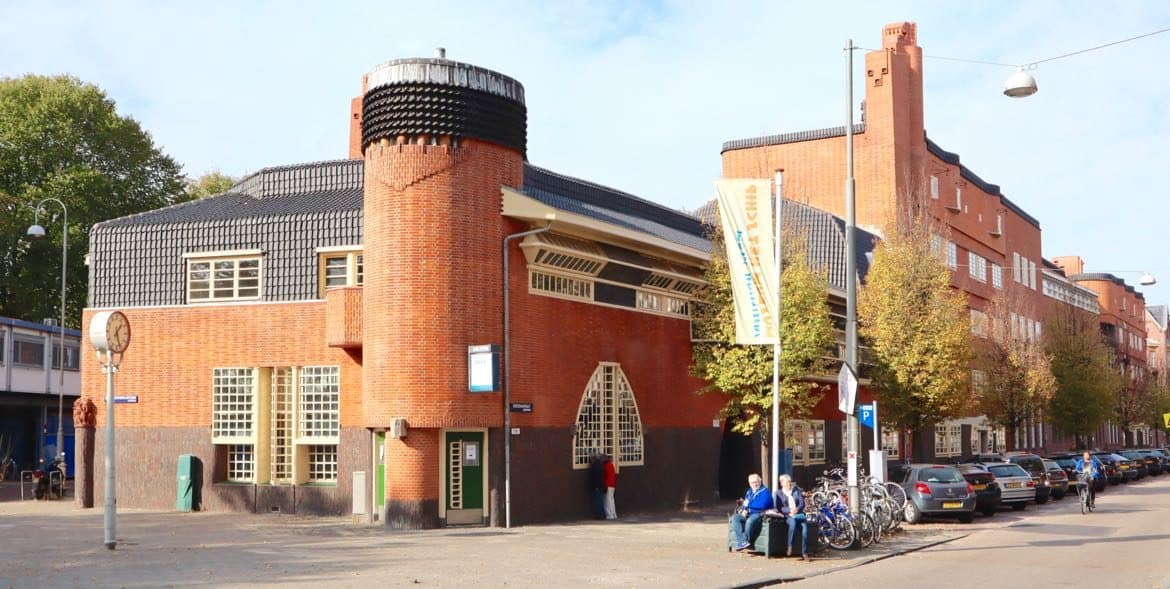 Museum Het Schip in Amsterdam is a real secret gem. The museum is located in an expressionist housing complex in Amsterdam West. The housing block is an example of Amsterdam School architecture. The museum tells the history of social housing in The Netherlands. There is a free tour every hour and a lunchroom.

Housing complex Het Schip is a ‘palace for the worker’

Het Schip was built between 1914 and 1921 by Dutch architect Michel de Klerk. The building has a strange, organic shape that flows and looks like a ship. The complicated brickwork, the walls covered with roof tiles, the windows with horizontal bars and many elegant but useless towers, as well as decorative sculptures, make it a typical building in the architectural style of Amsterdam School.

TIP Entrance to Museum Het Schip is free with the I Amsterdam City Card.

But the most remarkable fact about Het Schip is that it was built for the working class. People who worked in the nearby Amsterdam harbour lived here. ‘The ship’ contained homes, a small meeting hall and a post office.

It was the idea of the architects of the Amsterdam School that working-class people should live among beauty. Thus they created a living space that would ‘uplift’ the worker and his family. ‘A palace for the worker’, they called it. It was the first time such care, investment and dedication were put into the building of workers’ homes.

The young architects of the Amsterdam School had socialist ideologies that were popular at the time. In the 19th century, working-class people lived in terrible conditions in Amsterdam. Large families lived in small, dark and damp rooms. Worker’s neighbourhoods such as the Jordaan were more like slums. Diseases like malaria, typhus and cholera spread quickly.

The poor living conditions were the reason for richer citizens to start philanthropic organisations to construct quality and affordable housing. In 1901 the politicians recognized the flaw and the Housing Law was in place, setting a new standard for building. Everywhere housing corporations started to build social housing in the Netherlands. Over 80% of the housing built here, was social housing of good quality.

Museum The Ship in Amsterdam

A free tour is included when you visit Amsterdam Museum The Ship. The knowledgeable tour guide takes you around the building, inside the old post office, inside a replica of a slum house and to a replica of a typical 1920s family home.

Tours can be in English, but if you want to be sure: the 3 pm tour is always in English.

How to get there to Museum The Ship

Amsterdam Museum The Ship (Museum Het Schip)  is located in Spaarndammerbuurt. This Amsterdam neighbourhood lies near Westerpark and Westergasfabriek. From Central Station, it’s about half an hour’s walk.

Directions: Walk or bike to the end of shopping street Haarlemmerstraat, cross the square and the road (the large gate is on your right hand). Cross the bridge and turn right. Go under the railroad tracks and turn left straight away, crossing the street, following a bike road. Keep walking until you see the museum.

Bus 18 and 22 also stop just before the railroad tracks.