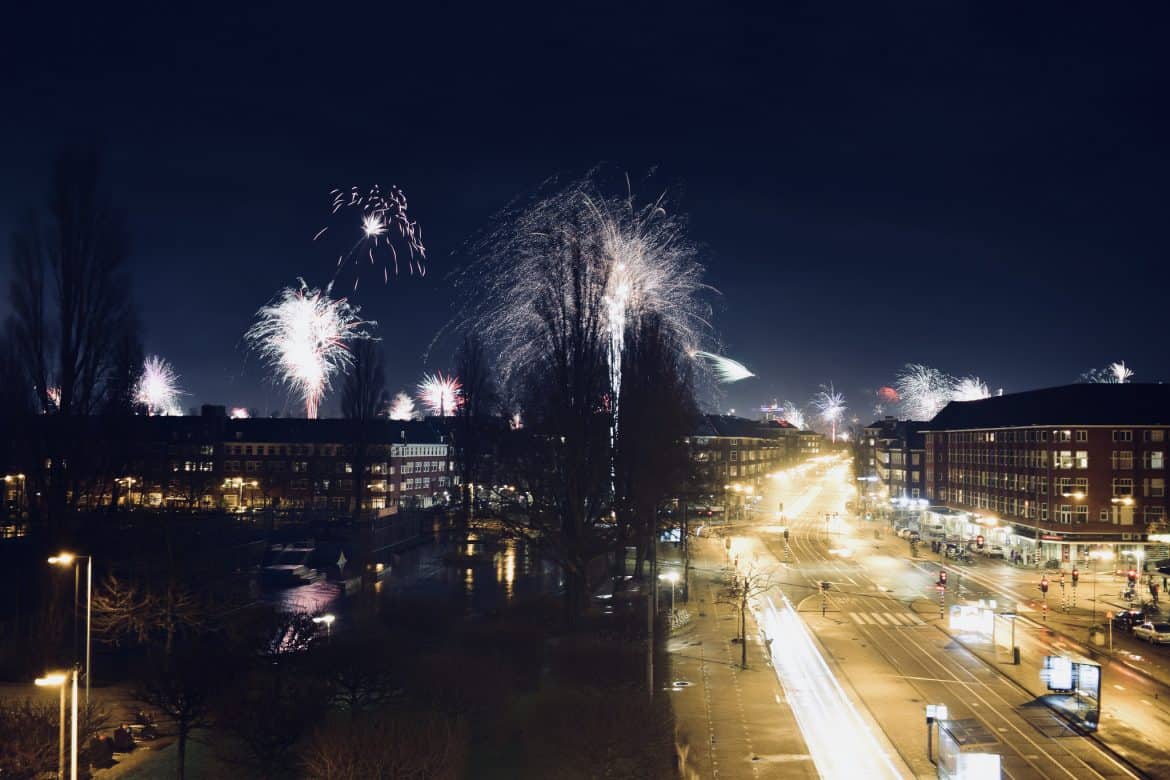 New Year’s Eve in Amsterdam is great! It’s celebrated in the streets, bars and clubs. Firework plays a big role in the NYE traditions of the Netherlands, so be prepared for a war zone. At midnight, people gather outside with champagne and ‘oliebollen‘ in hand. Everybody wishes everybody a Happy New Year!

Read this post to find out where to see or how to avoid the crazy Dutch firework, where the best New Year Eve parties in Amsterdam are and more about Dutch NYE traditions (don’t forget: three kisses!)

New Year’s Eve in Amsterdam is celebrated outdoors. In Amsterdam, crowds gather at the main squares in the centre: Leidseplein, Dam Square, Rembrandtplein and Nieuwmarkt from around 21.30. There are bars outside and music.

Just before the clock hits midnight, people go outside. They pour their glasses, set off their own fireworks in the street and enjoy wishing everybody a Happy New Year. Street parties will last well into the night. Many clubs, bars, and private parties continue partying until the early morning.

The best NYE Parties in Amsterdam

All clubs in Amsterdam organize their own New Year’s Eve party but beware that NYE clubbing is much more expensive than other nights. Entrances can be around 40 euros. Find more Amsterdam Events 2019.

Below you will find a selection of special New Year Eve parties in Amsterdam. More will be added!

Verknipt is known to organize great parties, showcasing the best in underground electronic music. Their first New Year’s Eve rave takes place in Casco, a television studio next to the ADAM Tower. Easy to reach by free ferry (runs all night from Central Station).

TIKTAK is famous for combing a line-up of Dutch hip-hop stars with electronic acts. They are organizing five New Years’ Eve parties in The Netherlands. The Amsterdam party is the biggest, taking place in AFAS Live.

A superstar DJ line-up, a warehouse-feel venue, amazing stage production, and a great audience is what you can expect at the New Year’s Eve party of Flirtez. It takes place in The Box in Amsterdam.

Where to see the best fireworks in Amsterdam

New Year Eve 2019/2020 there will not be an official firework show in Amsterdam. But in the Netherlands, people love firework. So everyone will buy their own in the days before New Year. At midnight, everyone sets off their own firework! Most firework is set off at Amsterdam’s China Town. This is an area to avoid when you don’t like loud bangs!

High roof bars are best to see firework in Amsterdam. Bars that have a great view over Amsterdam often organize special parties for New Year’s Eve. Examples: SkyLounge, Ma’dam on the top floor of ADAM Tower, Floor17 on top of the Leonardo Hotel in West, Canvas at the 7th floor of Volkshotel, Hopp, the open-air bar on the 8th floor of hotel Casa400 or W Lounge, the hip and luxurious rooftop cocktail bar of W Amsterdam hotel.

How to say ‘Happy New Year’ in Dutch

‘Gelukkig nieuwjaar‘ is Dutch for ‘Happy new year’. But this is so difficult to pronounce, that you’re better of saying ‘Happy new year’ and smile. Shaking hands with strangers is normal. If you have met before, girls & boys give three kisses on the cheeks when wishing each other a happy new year in the Netherlands.

What to do on New Year’s Day in Amsterdam

On New Year’s Day, Amsterdam slowly awakes from the festivities. It will be a mess, with all the fireworks and champagne bottles covering the streets, but the heroes of the city (the cleaners!) will do their best to get everything nice and clean again.

Apart from some souvenir shops, all shops in Amsterdam will be closed on January 1, 2019.  Many museums will also be closed. Rijksmuseum, Van Gogh Museum and Rembrandt House Museum are open on New Year’s Day. New Years Day might be a good day to take an Amsterdam Light Festival Cruise on the Amsterdam canals.

On NEMO’s website, it says there is no access to the roof in bad weather, during special events, ((at New Year)) and on King’s Day.

That is too bad, it was always a great spot to watch fireworks! Thanks for letting me know…

Hi
Me and two more friends are spending NYE and a few more days in Amsterdam
We’ve free shuttle bus from our hotel in Schiphol back to the airport
what’s the best and cheapest way to get to Amsterdam central on the 31st and also the best places to eat and clubbing? :)

My plans as a local, an all-inclusive party all night at this new jazzclub with my dearest friends, watch fireworks in the Jan Eef and eat a lot of oliebollen :) happy to show some tourists around that evening!

Hi,
we were delayed in our plans & have managed to get a reasonable place in Bussum which is 30 mins outside Amsterdam.
Would anybody have an idea if the trains from Amsterdam central run to Bussum on New Years eve & New years day.
thanks

Hi. Last train I see is at 20.10. Then there are no more train until 04.19, but then it will take you 1,5 hours. Check the journeyplanner of the NS (Dutch railways): https://www.ns.nl/en/journeyplanner/#/?vertrek=Amsterdam&vertrektype=treinstation&aankomst=Bussum%20Zuid&aankomsttype=treinstation&tijd=2017-12-31T20:30&type=vertrek

What about coffee shops and bars on New Years’s day ? I mean not only 1 January but 2, 3 January, till 7

Some bars and coffee shops might close on New Years Day. All other days everything is open as usual.

Thank you for an attention