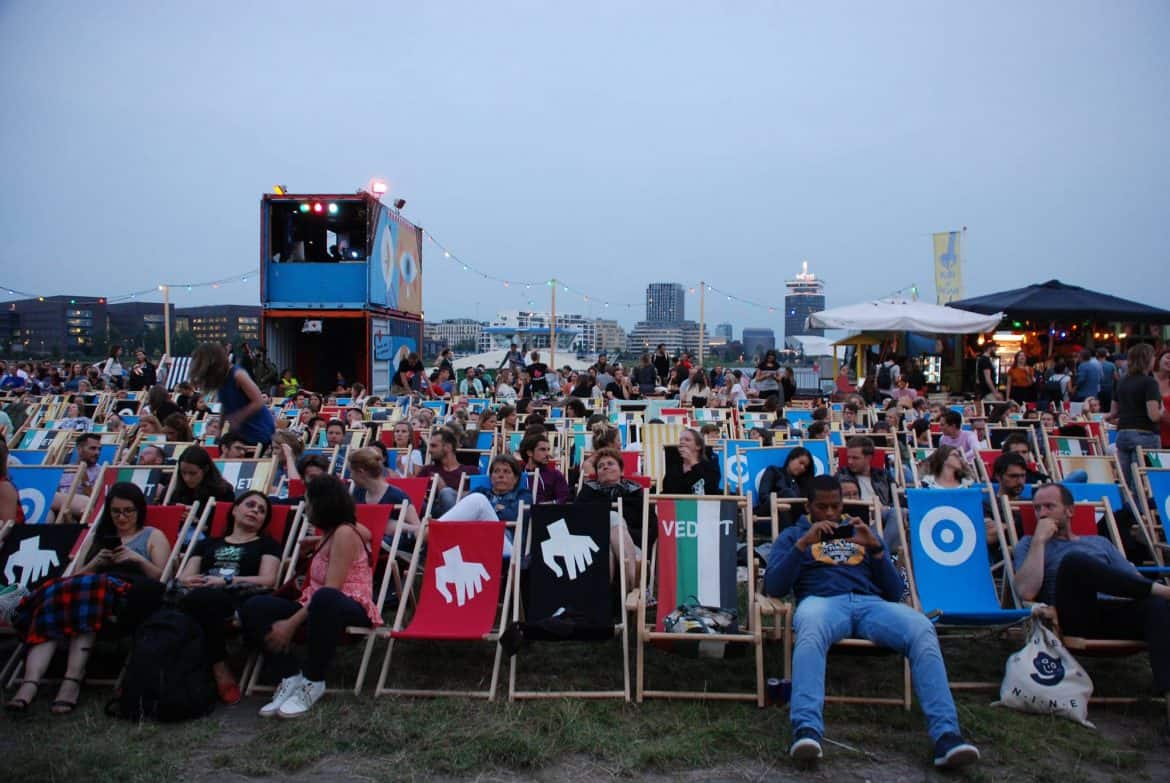 The Amsterdam outdoor cinema 2019 season has started. Open air films are more popular every year in Amsterdam. More and more cafés and cinemas offer wide screen films in the open air: streets, squares, parks and city beaches of Amsterdam. For open air cinema in Amsterdam, agreeable weather is a must, if not, watching a movie in the outdoor can turn from a great night into torture. If blankets have not been provided by the organiser, you’d best bring your own.

Bring your own drinks?
Most places in Amsterdam don’t like it when you bring your own food and drinks to an open air film screening, but it’s not likely they will make a fuss. Remember, most Amsterdam film festivals are always free or cheap and many run by the aid of many volunteers and covering costs by selling food and drinks.

Films with a view: Every Tuesday

Watch oudoor movies in Amsterdam at Pllek, the large bar and beachy summertime hangout at NDSM. Films with a View is their outdoor cinema festival in Amsterdam that takes place all summer long. Movies are every Tuesday, when the weather is nice. On Monday you can check on their Facebook page if it’s happening.

Pluk de Nacht is the oldest open air cinema in Amsterdam, and it’s still so popular, you really need to arrive at least an hour in advance to get a seat. The outdoor movies are always unreleased films that have never been screened before in The Netherlands. The settings is as beautiful as PLLek, only on this side of the IJ-water, a 10 minute walk from Central Station (walk West along the water). Pluk de nacht open air cinema in Amsterdam runs entirely on volunteers.

The World Cinema Amsterdam Festival takes place from 15 – 24 august in Rialto and De Balie. At Marie-Heinekenplein (Amsterdam De Pijp) and Vondelpark Open Air Theatre you can also see 6 movies outdoor in Amsterdam. The movies are international films and also with English subtitles if the film is not in English.

It’s a good idea to check the website or Facebook page of the charmingly small filmhouse cinema FC Hyena regularly because they offer outdoor cinema in Amsterdam Noord. On 13 and 17 August they have a special: Biker Outdoor Cinema, showing The Wilde One and the classic Easy Rider.

FC Hyena is a lovely cinema along the water of the IJ water. It not only has a wine bar but also a restaurant. And you can take you food with you into the film hall.

Every Friday there is an open air cinema at Het Ketelthuis, a small film house cinema at Westergas. Films start at sunset. Film screening moves indoor when it rains.

Film in the Park

Film in the Park takes place in Amsterdam’s Vondelpark, at VondelCS. Films shown are made by new Dutch film makers. Featured are recent movies, short films and feature film debuts.

VU On the Roof Film Festival

Amsterdam university VU shares its roof on four nights to screen films. The second film has been chosen by VU Amsterdam’s Writer in Residence, Arnon Grunberg. The other films are part of the World Cinema Amsterdam selection. There is food, talks and live music too!

West Beach Filmfestival takes place at a beautiful spot along the water of the recreational Sloterplas lake (at Bastion at the beach area). It’s getting bigger each year, with food trucks, dj’s, pre-films and activities for the kids added last year. Drinks and food are available, bringing your own is not appreciated.

Rooftop Movie Nights are cinema nights screened at different rooftops in Amsterdam. Base and organisers is the 17th floor of the Ramada Hotel near Rembrandt Park. On screen are popular films like Amélie and The Sixth Sense as well as cartoons, film house movies and sneak preview.