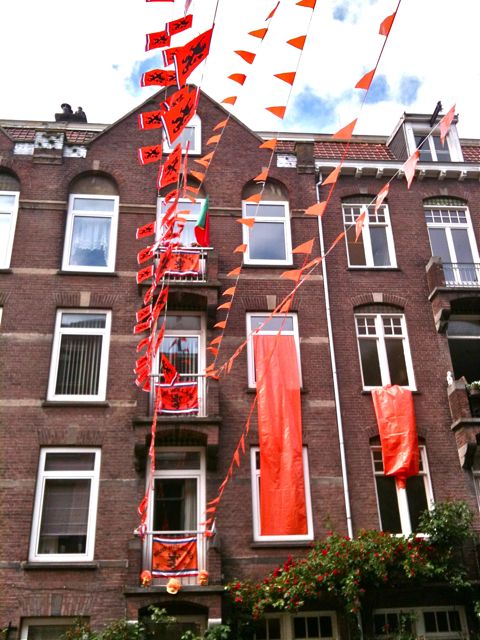 It’s that time again: crazy hats, funny accessories and orange t-shirts appear in the street of Amsterdam. When Holland is getting ready for the football craze that accompanies the European Football Championship, everything turns orange. 10 facts you need to know when you are visiting Amsterdam during these crazy times.

In Holland we refer to the national football team as ‘oranje’. Oranje (orange) is the name of the Dutch Royal Family, who originally came from the France region of Orange. This had nothing to do with the colour orange, but even so, Dutch people dress up in orange during all national events. The craziness that comes over The Netherlands when there is a football event is called: oranjekoorts (orange fever) or oranjegekte (orange craziness).

Netherlands only ever won the European Championship once: in 1988. Everybody knows it, everybody still talks about it. The team (with Marco van Basten and Ruud Gullit) sailed through the Amsterdam canals, while the crowd cheered them on during their homecoming victory ride.

Every time there is football event, there is some orange hype going on. Every supermarket or brand tries to come up with an original orange item and build its marketing scheme around it. Many are free hand outs, hoping the orange crowd will fall for it and promote their product for free. Also, many artists release a special ‘orange song’ to accompany the tournament. The most famous ‘orange song’ is Hup Holland Hup (‘go Holland go’). Hup Holland Hup has been a popular football song since Netherland won the Euro 1988. ‘Wij houden van Oranje’ by Amsterdam folksinger André Hazes is also still popular.

All over Amsterdam, in every bar, you can watch the competition. When the Orange team is up, bars fill up quickly, so it’s vital you find the best seat in the house early if you want to watch the game. If (when…) Holland makes it to the quarter finales, bars are allowed to bring large tv screen outside and serve alcohol. As of this moment, every game turns into a big party, just like Queensday.

Expectations are high because of the list of fancy players it the Dutch national team. Many play at in the top of the European football league: Arjen Robben (Bayern Munchen), Robin van Persie (Arsenal) Klaas-Jan Huntelaar (Schalke) and Wesley Sneijder (Internazionale) are names to remember.

Great article, a real nice summary. Btw point 10, the boycott, a corrupt polition being mistreated? Please, that’s just other corrupt politions supporting corruption, nothing more! People not in jail are mistreated daily around the world, how about supporting that cause first? ;)

I agree. Maybe the politicians think this is an opportunity, while Ukraine is in the spotlight, to point to the bad parts of the country.