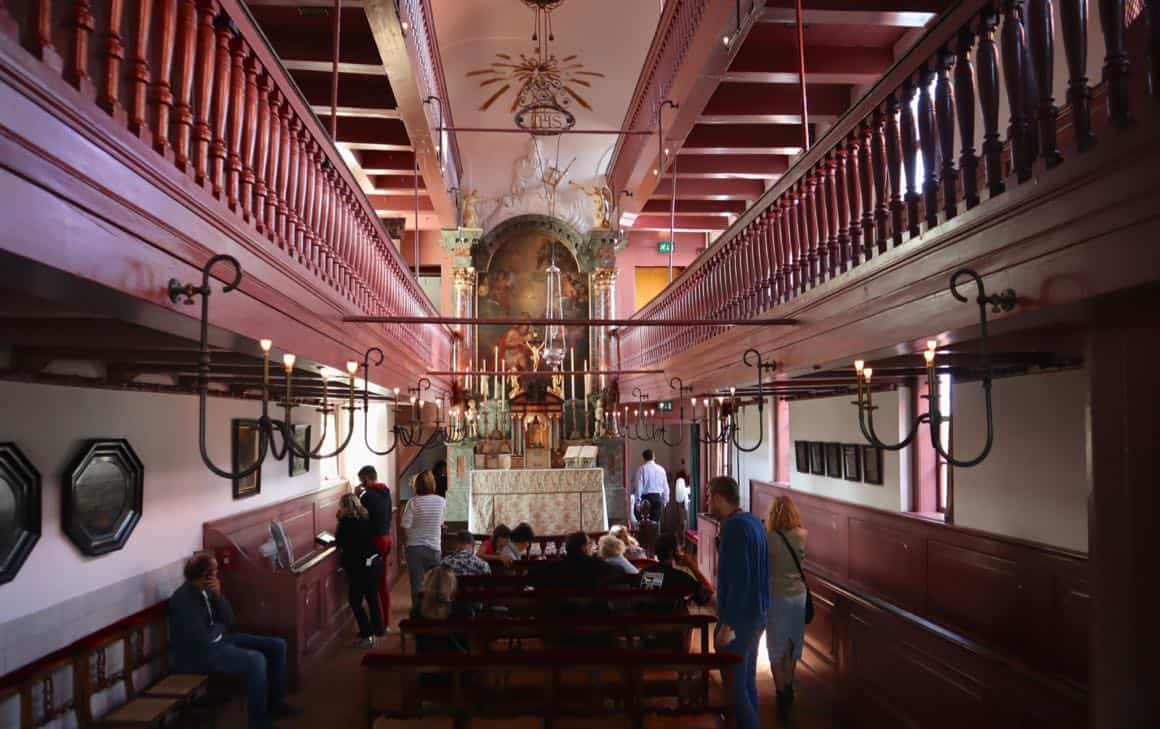 Everyone who visits the museum Our Lord in the Attic in Amsterdam, agrees: it’s worth a visit. The museum is an original canal house from the 17th century. The entire house is in tact: a badly lit, wooden house with narrow staircases, original bedrooms and large paintings on the walls. But the real amazement is in the attic where a complete Catholic church is hidden.

TIP Entrance to Museum Our Lord in The Attic is free with the I Amsterdam City Card.

Museum Our Lord in the Attic lies in the middle of the old historic center of Amsterdam on Oudezijds Voorburgwal. It’s just around the corner from the Old Church and the Red Light District. The official entrance lies next to the house: a light, modern building with a museum shop, a café on the first floor and additional exhibitions on the other floors that touch the subject of the museum only slightly. 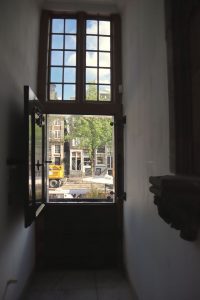 Front door of the 17 century house Our lord in the attic.

The tour starts in the basement where you get a free and easy audio guide that is set up in many languages. The audio guide is excellent, explaining the situation in 17th century Amsterdam, making you understand why this church in the attic was a hidden church.

While you follow the signs, up those narrow wooden staircases, you wander around its many rooms. In each there is an audio explanation available. You get a real feel of how people lived in those days.

The house belonged to a German merchant, Jan Hartman, who came to Amsterdam when he was only 24. He traded in textiles. In 1661, when he was 42 and had a wife and 5 children, he bought the house and did big renovations.

But Amsterdam had just gone through many changes. The rule of the city had gone from a few powerful Catholic families to the new protestant leaders. Jan, who was a Catholic, was not allowed to practise his religion in public. And so he set up a secret church in his attic. The priest also lived in the same house.

Our Lord in the Attic was not the only ‘secret’ church in Amsterdam. In those days there were many, until the ban for Catholic masses was lifted in 1850. A bigger secret church is De Papegaai (‘The parrot’), located in the middle of the busy shopping street Leidsestraat.

How to visit the museum Our Lord in the attic

The museum Our lord in the attic is open every day till 6 pm. The museum is located near the Oude Kerk (Old Church) on Oudezijds Voorburgwal 38. Entrance for Adults is € 11,-, kids € 5,50-. Audio tour is free.

A secret gem in Amsterdam: Museum...