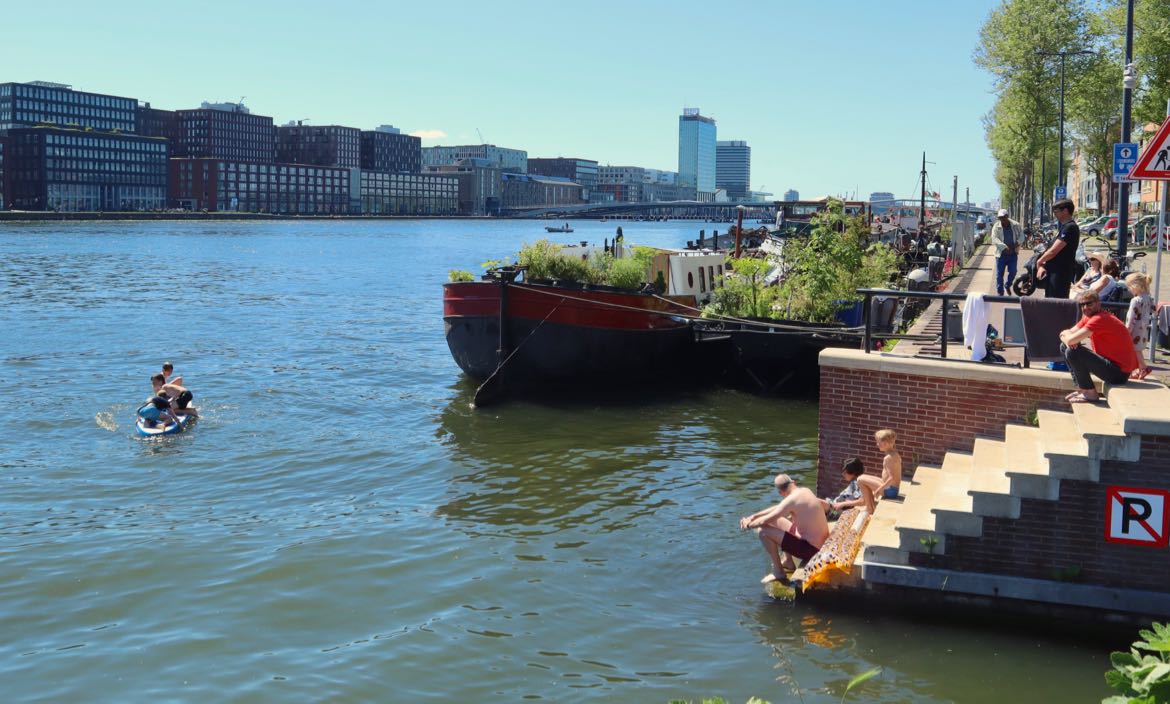 On the map below you’ll find places to go outdoor swimming in Amsterdam. Also added are children’s pools in Amsterdam’s parks: Vondelpark, Westerpark and Beatrix Park among others.

Sloterplas is one of the best places to go swimming in Amsterdam. Sloterplas is a large recreational lake in Amsterdam West. On the Northside of the freshwater lake, there is a sandy beach. The bar and restaurant Hotel Buiten offers food and drinks on warm days on its terrace.

On the western shore of the Amsterdam Sloterplas you can go open water swimming and lie in the soft green grass afterward. The city council has placed special stairs to get in and out of the water. A watersports center rents out canoes, sailing boats, SUP and more.

How to get to Sloterplas lake

Sloterplas is a 20-30 minutes bike ride from the center of Amsterdam. Take tram 7.

At Westergasfabriek, past the Westerpark, there is a large green field that fills up with barbecues and parties of Amsterdam’s inhabitants in summer.

There is also a large paddling pool for children. If you want more peace, walk up the pool, place yourself along the water and dip your feet in while you read a book. Best way to spend a summer’s day in Amsterdam.

Oosterdok is the body of water just east of Central Station. This is the old ‘inner harbor, and who knew: you can swim in here! Between the NEMO museum (the green ship-like building see photo) and the Maritime Museum lies the ‘Marineterrein‘. A few years ago this area opened to the public.

To get here, follow the main road from Central Station to the Maritime Museum and walk around it. You will find a large wall with a gate to enter.

There are many spots to dive into the river Amstel. And when it gets hot, you will find people swimming everywhere. One of the more popular places to hang out, is near Amsterdam’s only sky scraper, on the east side of the river.

The Amstel river makes a band here, and on a good day, there are dozens of boats gently rocking on the cool water. In front of bar/restaurant Thuis aan de Amstel, there is a large grass field to chill. The water is easy to reach and there are steps to get out.

De Nieuwe meer is a large lake in the middle of the Amsterdamse Bos. The lake is popular for fishing and yachting. Find the bike road that circles around the lake and you will find many spots to jump in the water. Near the southwest end, there is also a small sandy beach and a place to drink and eat.

On weekends, you can enjoy a nice boat ride at the lake for a few euros by taking the small ferry. It sails right across the Nieuwe Meer to the Amsterdamse Bos (forest). Here, you can enjoy a pancake restaurant

The Nieuwe Meer is also a popular cruising area for gays and there are highland cattle walking around freely. Don’t worry, there is nothing to fear from either. Just keep your distance!

The Java Island lies in the IJ waters in the East side of Amsterdam. Near the Passengers Terminal, docks for large cruise ships, there is a great bridge that takes you to the island. The most western tip is empty, with great views on Amsterdam central station. The island is long. It’s is mostly built with houses.

The inhabitants enjoy the docks along the water in summer time. There are many places to jump into the cooling waters. By bike, you can enjoy a lovely tour around the island and find a large grass field in the Eastern part that is very popular for sunbathing and swimming.

Swimming at the Amsterdamse Bos

The Amsterdamse Bos is a large woodland park (we call this a ‘forest’). It’s the largest recreational area in Amsterdam. It’s three times bigger than Central Park in NY and excellent for long walks and runs.

The Big Pond (Grote Vijver) at the Amsterdam Forest is perfect for swimming, especially for children. There are showers, toilets, and a café. You can also rent canoes and water paddle bikes. When the sun sets, get out of there because mosquitoes take over.

At Amsterdamse Bos there is a lot more to do than just swimming. There are exciting paths that run above the water. You find these ‘speeleilanden’ near the open air theatre (Openluchttheater).

IJburg is a suburb in the east of Amsterdam, easily reached by tram 26. It consists of 6 artificial islands, constructed for housing. In winter it can be windy and feel desolate, but in summer, when it’s hot, everyone wants to live on IJburg. The reasons are its beaches and many places to swim in open water.

In 2020 the beach and beach bars are open. There is also supervision for the beach and water. Though due to Corona the beach will be monitored. When there are too many people, probably it will be closed.

Swimming in the Amsterdam Canals

Is it possible to swim in the Amstedam canals? Yes, you can swim in the canals, but it is not safe. The Amsterdam canals used to be an open sewer, but that was a long time ago. The water in the canals is now rather clean. The problem is that there is a lot of garbage in the canals, especially bikes. Diving or stepping on bicycle parts can be painful. So I do not recommend it.

Rent a SUP in Amsterdam

Stand-up-paddle or in short SUP has become very popular in Amsterdam. The canals seem perfect for this activity. There are more and more places where you can rent a SUP board and paddles and enjoy a fun time on the Amsterdam canals. Try Canalsup for paddling near Rembrandtpark and the canals, Amsterdamboattour for SUP at the Amstel river (Berlage bridge) and SUPwest for a rental near Westerpark.

Gaasperplas is similar to Sloterplas, but it’s much further out, direction southeast. The recreational facilities are much better though at Gaasperplas. Apart from a great beach, shops, toilet facilities and even lifeguards, Gaasperplas hosts a camping site, a sailing club and you can rent canoes and windsurfing. Gaasperplas is easy to reach by metro.

Dangers of outdoor swimming in Amsterdam

It is not dangerous to swim outdoors in the wild in Amsterdam, except when it has been very hot for a very long period. When there is a ‘heatwave’ (hittegolf) in Amsterdam, the natural open water can get poisonous.

Typically you’ll find a layer of ‘scum’, a thick dirty green and blue layer floating on top of the water. It’s also is quite smelly. The so-called algal blooms or blue-green algae produce some toxic bacteria which are harmful for humans and animals.

You can check the quality of the water in the the Netherlands at zwemwater.nl.

The map shows the Nieuwe Diep is OK for swimming, but there is too much lead in the soil, and should be considered “at your own risk”. The council recommends against it, and it is signposted:
https://www.amsterdam.nl/toerisme-vrije-tijd/parken/flevopark/zwemmen-flevopark-0/

Thanks for the warning. The Dutch authorities are extremely careful and if it’s really not safe, swimming will be banned.

You can read my mind! I’m just sitting in the Vondelpark, was looking at the brown water, thinking: Where in Amsterdam might the water be clear enough for a swim?
Thank you very much for listing all the places! :-)

Glad to be of help! Enjoy the swim!

“The problem is that there is a lot of garbage in the canals, especially bikes.” That moved me :-)