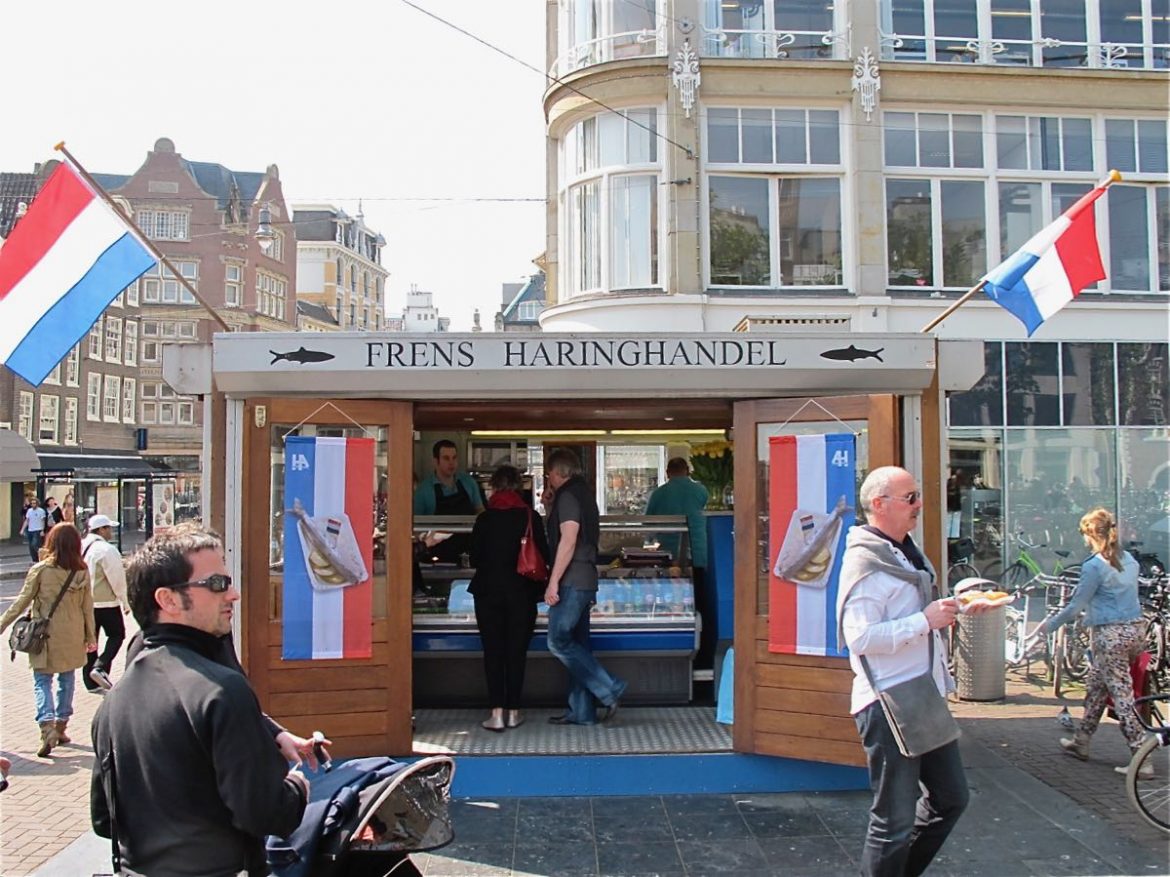 In Amsterdam, fish stands sell raw herring (‘haring’), a soused raw fish with a strong taste. Dutch raw herring is hugely popular in Amsterdam. In Holland, people have been eating raw herring for over 600 years. For foreigners, it might seem strange to eat a raw fish that has nothing to do with sushi.

Here are the basics about Dutch raw herring in 8 questions:

Herring is a small fish that is very popular among Dutch people. It is caught in the North Sea and the East Sea (near Denmark) from mid-May to mid-July.

The herring has been frozen and then laid in salt for a couple of days to ripen the fish (soused herring). So, strictly speaking, it is not raw herring.

A good raw herring must have a soft texture with a nice bite. It tastes and smells fresh and salty. It must be big and have a high percentage of fat (over 15%). Dutch raw herring is famous for being a remedy for hangovers.

4. What is ‘Hollandse Nieuwe’?

The first ‘Hollandse Nieuwe’ arrives on the market in the beginning of June. The first barrel of herring is officially and joyfully auctioned in a feast. The raised money on the first auctioned herring goes to charity.

5. Where can I eat the best raw herring in Amsterdam?

Every year, you can vote for the best herring in Amsterdam. Some herring sellers always sell winning fish. Some suggestions from reader of Amsterda daily newspaper Parool:

6. Is raw herring traditional food in the Netherlands?

Yes. People from Holland (from the West of the Netherlands) have been eating raw herring for over 600 years. Traditionally, eating herring was mostly a practical matter. The fish is rich in nutrients and fat. When kept in a barrel of salt, it can be eaten all winter.

This meant the fish tasted very salty. It had to be cleaned with milk to get the salt off. People ate the herring with raw onions to get the real herring taste out.

Nowadays, herring can be stocked in salt and frozen. This slows down the ripening process. This way, excellent quality raw herring can still be eaten in November and December.

7. Do they eat raw herring in other countries too?

Yes, they also eat herring in Germany. In Germany herring is typically eaten in combination with potatoes and a salad or it is served with cream or yogurt sauces with onions and gherkins.

The Scandinavians eat their herring more marinaded. In Sweden, herring is traditionally served on Midsummer’s Eve.

In the North of Sweden they lay their herring to rot in a barrel with herbs for a while before eating, giving the herring a gruesome smell.

At any fish stand in the street, the soused herring is served on a paper plate with onions and pickles. Generally, they chop the fish in little pieces or served on bread (‘broodje haring’). Traditionally, however, raw herring is to be eaten by holding the fish by its tail, dipping it in onions and letting the slippery raw fish then slide into your mouth.

To show you how raw herring is eaten properly, we made this video:

[…] those who prefer the healthy option, there is raw herring with finely cut raw onions — something really popular to eat in Amsterdam. It’s actually pretty good. I tried and loved […]

I would like to find someone or somewhere to buy the herring I got raised on them parents from Amsterdam it was a white keg with a red top can you help please i,m on face book also .thank you DM

Herring with onion? Never! Herring should be eaten as is. Onion distracts from the herring tast!!
B.T.W. Swedish Surströmming isn’t rotten. The flesh is firm. It’s fermented. Big difference, exept for the smell..