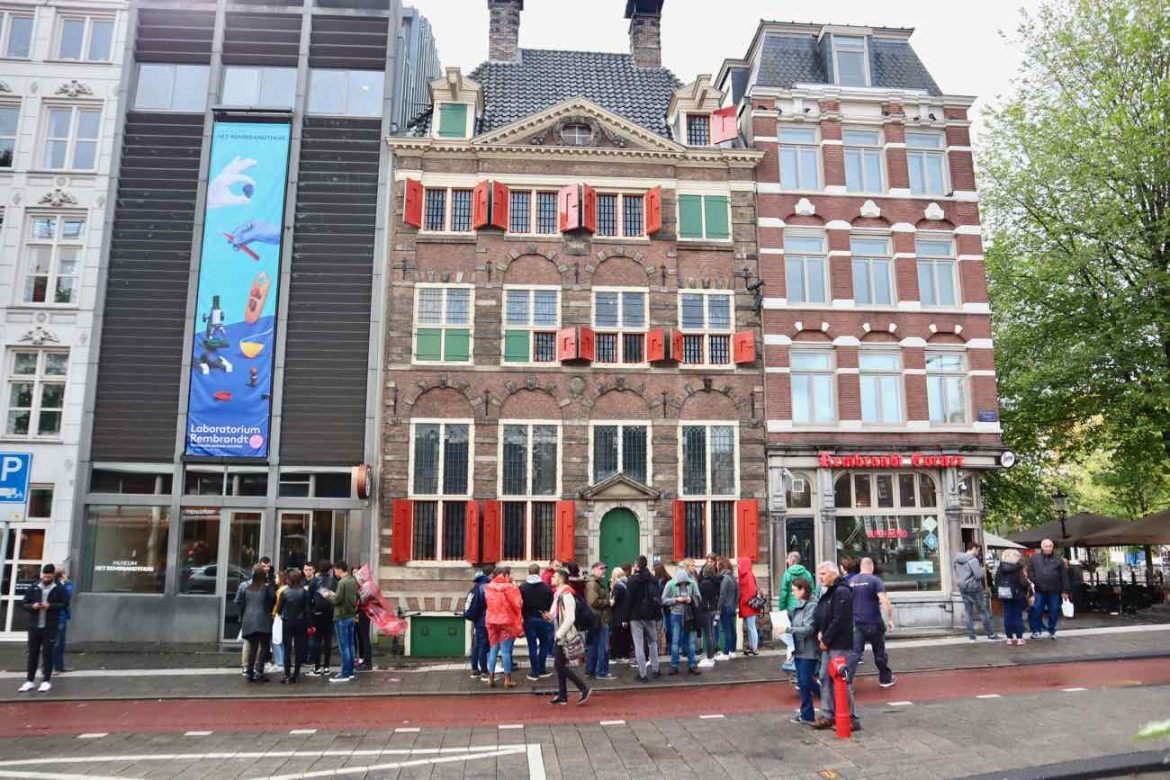 The famous Dutch painter Rembrandt lived most of his life in Amsterdam. His former house and workshop in the center of Amsterdam is now home to the Amsterdam Rembrandt Museum, the Rembrandt House. The Rembrandt Museum holds a huge collection of his etchings. Rembrandt’s life story reads like a soap story with all the scandals and love affairs.

7 Things about Rembrandt before you visit the Rembrandt Museum

1. Rembrandt was a businessman

The two most famous painters of The Netherlands are Van Gogh and Rembrandt, but their lives and personality couldn’t be more different. Van Gogh lived rather anonymously at the end of the 19th century. The genius of van Gogh was sadly only discovered after his death.

Rembrandt van Rijn lived in the booming 17th century. He was a painter and a businessman, trading in art as well as painting. For twenty years he and his many students created and copied a huge amount of paintings.

TIP The Rembrandt Museum is free to enter with the I Amsterdam City Card.

Many of Rembrandts’ paintings were portraits of rich citizens: merchants, ministers, mayors and other officials. His popularity made him a member of the trendsetting elite of booming Amsterdam.

Everyone wanted to have their portrait painted by the great Rembrandt, hanging it on the wall of their Amsterdam canal house.

2. Rembrandt was not from Amsterdam, but from Leiden

Rembrandt is known by his first name. He was born as Rembrandt Harmenszoon van Rijn in the city of Leiden in 1606. He was the 9th son of a miller. His talent was quickly discovered. When he was 20 years old, Rembrandt moved to the Amsterdam Jewish Quarter, an area where many artists lived and worked.

Moving into the Rembrandt House

In 1639 he moved into a huge merchant villa, now the Amsterdam Rembrandt House. He bought another warehouse along the most prestigious canal of the Jordaan Quarter: the Bloemgracht canal.

A few years later Rembrandt married Saskia van Uylenburg. She was a young girl from an important and rich family, thereby increasing his fame and fortune.

The Amsterdam Rembrandt museum, the Rembrandt House Museum, is located in the Joden Breestraat (‘Jewish Broad Street’). The impressive building with its red and green shutters (green when closed, red when open) has been fully restored to a traditional 17th-century house.

The dark rooms with scattered sunlight pouring in from the window, the kitchen with its pots and pans, the chimney, wooden furniture, many paintings and painter’s work material gives you the feeling of stepping into one of Rembrandt’s paintings.

Etching demonstration at the Rembrandt museum

The Amsterdam Rembrandt museum organizes demonstrations. An etching demonstration takes place every day from 10:15 am to 1:15 pm, and from 1:45 pm to 4:45 pm. You can see how etchings were printed in the 17th century.

A paint preparation demonstration is held every day from 10:15 am to 17:10 pm. You can watch and see how pigments and oil are turned into beautifully colored paints. All demonstrations are free of charge.

4. Rembrandt’s most famous painting is The Night Watch

Rembrandt bought the house of the Amsterdam Rembrandt museum with the money he made from this most famous work: The Night Watch. The Night Watch depicts a group of men who were part of the city guard of Amsterdam (‘schutterij’). The civic guard was like a town watch who protected the city in case of an attack, revolt or fire. Its members were wealthy citizens.

It was custom to have the leading officers of the civic guard painted by a local painter, usually during a banquet. These group portraits are now famous for being typical of Dutch Golden Age paintings. If you wanted to be in the picture, you had to pay. The price was determined by the position of the person in the painting.

Another great feature is that instead of a static military portrait, the group of people seems to be moving. Also, it’s rather realistic and the faces are not all too beautiful. Legend has it that the people who are on it were not happy at all with the result!

You can see The Night Watch by Rembrandt at the Amsterdam Rijksmuseum.

5. Rembrandt was a difficult and moody man

Rembrandt’s rise to fame in 17th century Amsterdam did not mean he made concessions as a painter. As The Night Watch shows, he didn’t try to make the world more beautiful. In many of his paintings, there are ‘common people’, like farmers and housemaids.

For his students, Rembrandt was a difficult teacher. The many anecdotes about Rembrandt tell us he was rude and had a bad temper. He didn’t care about the opinions of others and he was rather stingy.

Some historians say Rembrandt was never really accepted into the highest of social circles. His lack of diplomacy combined with a series of scandals and moral mishaps eventually led to the downfall of Rembrandt.

6. Rembrandt had a scandalous love life

One of the most famous scandals in Rembrandt’s life concerned the sexual relations he kept with his nanny, Geertje Dircx. The affair had started shortly after his wife Saskia had died. But Rembrandt refused to mary Geertje. He was afraid that by marrying the lower-class girl, he would lose Saskia’s fortune.

Five years later he started a new love affair with the 20-year old Hendrickje Stoffel. Reason for Geertje Dircx to leave the house in an angry scene. She sued Rembrandt for alimony. Rembrandt’s revenge was brutal. He bribed some neighbors to talk ill of Geertje and the poor girl is sent to prison.

When his new lover Hendrickje is pregnant with Rembrandts’ child, again he refused to marry her. Coincidence or not, from the moment the scandals start, the important Dutch family Orange (who would later become the Dutch Royal Family) stopped ordering paintings from Rembrandt and many follow their example.

Rembrandt’s financial strategy was a little unorthodox. To pay for his luxurious lifestyle, he borrowed money from his clients as a security that he would paint their portrait. He even bought his house on Joden Breestraat with a mortgage. Eventually, around 1654, the borrowing had started to end.

Old customers didn’t come back and new costumers preferred a new style. Paintings by the Haarlem painter Govert Flinck, for example, came in fashion. Rembrandt, desperate for money even held auctions to sell his painting and pay his large debts.

Legend has it that he asked Hendrickje to sit in the audience and make a bid to drive up the price of his work. He even sold this late wife’s grave in the Old Church. But nothing helped. Rembrandt went bankrupt and he lost the house on Joden Breestraat.

The pest in Amsterdam

During the last part of his life, Rembrandt lived with Hendrickje Stoffels at Rozengracht in the Jordaan. He kept painting though, creating work in a very different style. In the years 1663 to 1664, a horrible pest epidemic hit Amsterdam. One in seven people are killed by the Black Death (30.000 people).

Among the casualties are Hendrickje and Rembrandts’ son, Titus. In 1669 Rembrandt himself died. He was buried in an anonymous rental grave in the Westerkerk, which up to this day, never has been found.

Source: Much of the information in this article was taken from the book: ‘Amsterdam, A brief life of the city’  by Geert Mak.

A secret gem in Amsterdam: Expressionist...