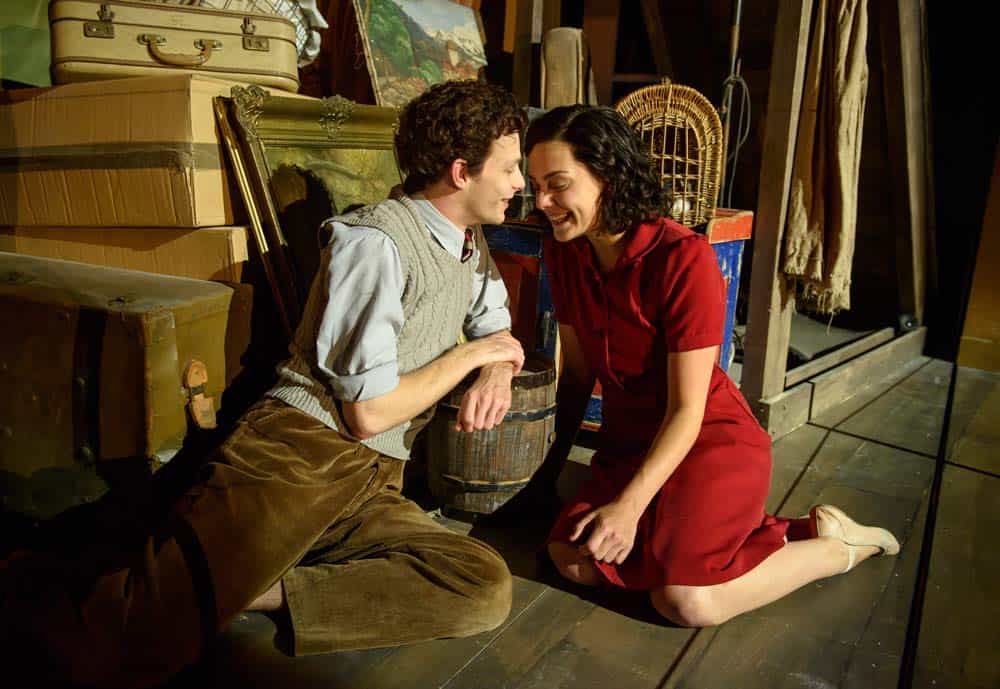 The theatre play ‘Anne’ which is staged at the Theatre Amsterdam, is based on the book ‘The Diary of Anne Frank’. The diary was written by the teenage girl Anne Frank, who went into hiding with her family in Amsterdam to escape from the nazis during the second World War.

The theatre play ‘Anne’ is in Dutch, but for English and German there is audio available. Most impressive about the play is the huge stage, that consists of a 3- storey replica of the hide-out, a secret annex, at Prinsengracht canal (now Museum Anne Frank House).

‘Anne’ is also a very long play – 3 hours – and at times it gets a bit dull. For teenagers it can still be a an impressive night out.

Admittedly, I don’t remember much about the book or about my own school trip visit to the Anne Frank House in Amsterdam. But I do know that it is the context, the family’s hide out, that makes this teenage diary so captivating.

Teenager Anne Frank
In her diary as well as in the play, 13-year old Anne describes her life like any other teenager would: she tells us how she feels. She describes the mixed emotions that most people go through at that age.

And so, during the play, we hear her tell us how she feels when she gets her first menstruation, when she receives her first kiss, when she revolts against her mother, how she adores her father and how is annoyed with her sister Margot.

We can all recognize these feelings. After all, during these years, your body starts to change and you start to question the principles of life your parents taught you. During your teenage years you want flee from the old and embrace the new: meet new people, change your friends, explore the bigger world. Teenagers by definition want to break away from their family.

Locked up in the annex
Fate however, forced Anne Frank to spend her teenage years locked up in a house (the ‘Achterhuis’) with her parents, her sister and another family. All this makes Anne’s situation extra distressful.

But the Anne we see in the play takes it all really well. She is the always cheerful, happy go lucky, full of energy and life girl, who bounces around the annex hide-out like Tiger in a Pooh story, thereby driving the rest of the inhabitants mad.

Eventually, when the nazi’s discover their hide-out and the gestapo come, we find out that 2 years and 1 month have passed. Only then you realize how long the Franks were in hiding. Even the nazi officer is in shock.

Petty quarrels and silly fights
The sudden arrival of the Gestapo and the realization that the family spent more than 2 years in a house together is also surprising for the viewer. The family Frank and the family Van Pels don’t seem to have changed much after the ordeal.

The caring, sensitive mother, the strong ‘pappi’, the quiet older sister, the posh mrs Van Pels and her smoking husband, their timid teenage son and dentist Fritz, they all just went through an endless series of petty quarrels and silly fights, running from room to room, going up and down stairs, but it all didn’t make much of an emotional impact on the viewer.

The impressive 3 storey replica of the secret annex, now the Museum Anne Frank House in Amsterdam.

We don’t know if after 2 years, the family Frank has become closer by sharing these amazingly small quarters, living together so intensely while at the same time hearing from their friends Miep and Jan how in the outside world, their friends and relatives were deported to concentration camps.

Hiding from the nazi’s

Anne doesn’t grow up
We find out Anne now has her period and gets kissed and finds out her best girlfriends are sent off to be murdered, but there is no sign of the emotional transformation we would expect as a consequence. Anne doesn’t really grow up, in the play.

Anne’s observations of her fellow hiders were smart and made her come across as an intelligent and curious person, interested in finding out what drives people. There was a personality development and profoundness in Anne’s diary that was missing in the play.

Dad peeks in on Anne’s sister Margo at the secret hide out at Amsterdam’s Prinsengracht.

What woman would Anne have become?
Sadly, in reality, we will never know how Anne grew up and what kind of woman she would have become. But the leading actress who plays her, nor the writers of the play, also seem to have no clue.

Anne Frank had a huge influence on generations of young people all over the world. They identified with her as a teenager and her writing made visible in a personal and strong way what horrible things people do to other people, just because people feel or are told, that they are different.

I personally feel Anne Frank deserves to be presented as more than a wild, rather shallow, hormone driven teenage girl like the play makes her out to be.

‘Anne’ play in Amsterdam
The theatre play ‘Anne’ is running in the new Theater Amsterdam.
Tickets are available from €20. There are both matinee and evening performances.

The play is in Dutch. Subtitles and audio is available in English and German thanks to a system of personal ipads located at your seat at your request. In Spanish and French there are only subtitles.

The Theater Amsterdam is located at Houthavens, an industrial area outside the centre of Amsterdam. The theatre can be reached by public transport by bus only.

Amsterdam quays and bridges on the...

6 Things that make Amsterdam a...

5 new rules in Amsterdam in...