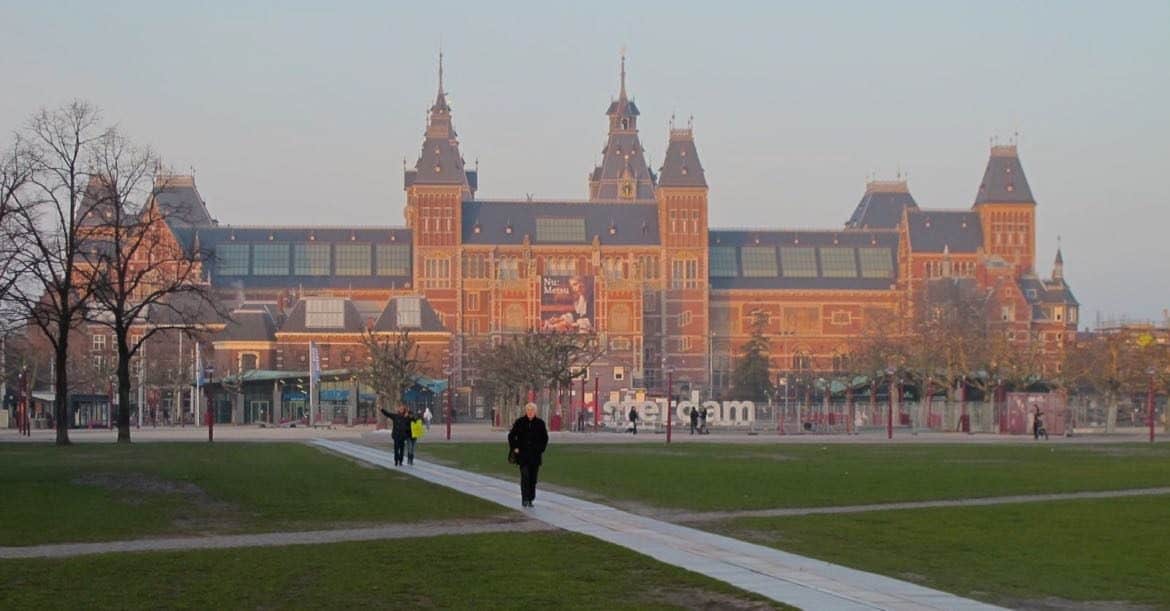 The Rijksmuseum is the Netherlands’s Museum of National History. The museum at Amsterdam’s Museum Square holds a large collection of  Dutch masterpieces from the 17th Century. Be amazed by the paintings by Rembrandt van Rijn, Johannes Vermeer and Frans Hals.

5 Reasons why you should see the Rijksmuseum when you are in Holland.

The Amsterdam Rijksmuseum was built as a museum on orders of the city of Amsterdam. It was built in 1885. The architect was Pierre Cuypers. Cuypers was a Catholic man who created many churches all over The Netherlands. Cuypers also created Amsterdam Central Station, you might find they look very similar.

The Rijksmuseum building, outside and inside, is decorated with tile pictures, stained-glass windows, sculptures, mosaic floors and wall paintings. Many of the images depict scenes of important events from Dutch history.

When Rijksmuseum was opened, many people were not happy with the result. The protestant elite complained that looked like a Catholic church. King of Holland, William III, famously said: ‘I will not set foot in that monastery!’. He refused to lay the first brick and to perform the opening.

How to avoid lines at the Rijksmuseum

The busiest months in the Netherlands are April, May, and August. The busiest days in the Rijkmuseum are Friday, Saturday and Sunday. The busiest hours are between 11 am and 3 pm. Avoid standing in line! Buy at ticket online.

2. The Amazing Dutch Masterpieces in the Gallery of Honour

The Gallery of Honour is one of the highlights of the Amsterdam Rijksmuseum. The gallery is a long corridor.  Left and right are alcoves with the Dutch masterpieces of the Golden Age (the 17th century).

3. The Night Watch by Rembrandt

The Gallery of Honour leads to the most important painting of The Netherlands: the Night Watch by Rembrandt. The painting portrays a captain (Frans Bannink, dressed in black with a red sash) and lieutenant (Willem van Ruytenburch, dressed in yellow with white sash) and their 16-men strong militia. This type of militia was composed of civil men. It was an honour to be part of this ‘police’. They protected the village or city in case of fire, crime or uproar.

The painting on the Night Watch is famous for its size, the dramatic use of light and shadow and the perception of motion in what would have traditionally been a static military group portrait.

4. Cuypers’ Library at the Amsterdam Rijksmuseum

There is also a library at the Rijksmuseum. It’s an impressive design with the neo-gothic and neo-renaissance style. This is the style that the architect, Pierre Cuypers, the architect, loved so much.

Visitors, students and art historians may use the library to delve deeper into the Rijksmuseum collection. iPads are available for general use and there is free WiFi access both in the library and throughout the museum.

At the Asian Pavilion, you will learn more about the 800-year long history of Amsterdam and Holland. On display are all kinds of objects from the maritime days: sculptures, archaeological finds, costumes, weapons, Delftware and treasures. Many were brought back by sailors and traders from Asian lands.

Sailors from the Dutch VOC, the Dutch East India Company brought many objects back from far Eastern lands: China, Japan, Formosa and the Indonesian islands.

The goal of the Dutch VOC was to create a monopoly on the spice trade in the entire area east of India. And so it did. By waging wars, negotiating treaties, striking their own coins and establishing entire colonies and governing them, the VOC company was the most powerful trading entity for the next 200 years.

The exotic goods the sailors found in countries such as were shipped back home to Amsterdam: Chinese porcelain, precious Japanese lacquer and silk, strange spices, exotic animals, furniture made with black ebony and clothes of Indian cotton. From the example of Chinese porcelain, the Dutch created the famous blue-white porcelain we now know by the name ‘Delftware’, which is also in the great collection of the Amsterdam Rijksmuseum.

It is a pity to read the History of Amsterdam being considered to be Amsterdam Golden Age. In reference to this paragraph, “The goal of the Dutch VOC was to create a monopoly on the spice trade in the entire area east of India. And so did. By waging wars, negotiating treaties, striking their own coins and establishing entire colonies and governing them, the company was most powerful trading entity for the next 200 years”. All of this seems to be rather unfair and inhumanly practices. Why should one set of human beings treat other human beings with torments, cruelty. What kind of civilized characteristics does this reflect?

It is beyond human logic why did people of Holland wanted to establish a monopoly on the spice trade, etc, etc. It was obviously done to benefit Holland without thinking about the impact of impoverishing the people residing in those areas. The Spices, SILK ETC, ETC growing in the tropical OR non-tropical part of the world are a property of those respective countries and instead of buying the spices at the cost set by the countries, VOC decided to be a parasite on those countries and leech their blood and set out to advantage Holland through wars, etc, etc. This was absolutely unjust and crude form used to impoverish the residents of those countries.

Human Race must opt for better relationships with countries that are mutually benefiting, without coercion or wars, manoeuvres and manipulations, who have the products, raw resources. Humans are considered as a superior living being within the animal kingdom and our actions need to reflect superior ideals and virtues. Negating the fact of good trading practices is not humanly but self-loving. I urge that all human beings need to accept that people of colour are not ants, birds or animals, as evident by one physiology and anatomy.

It is not my intent to be offensive but a thought that everyone needs a REMINDER.

Thank you for accepting my comments.

Thanks for commenting. I’m afraid these type of business is still very much alive today. The companies of today just know better how to keep their actions and the harm they cause to local markets, people and the environment hidden from view! Makes you wonder if the consumers of today even care about it more all than the old sailors back in the day…