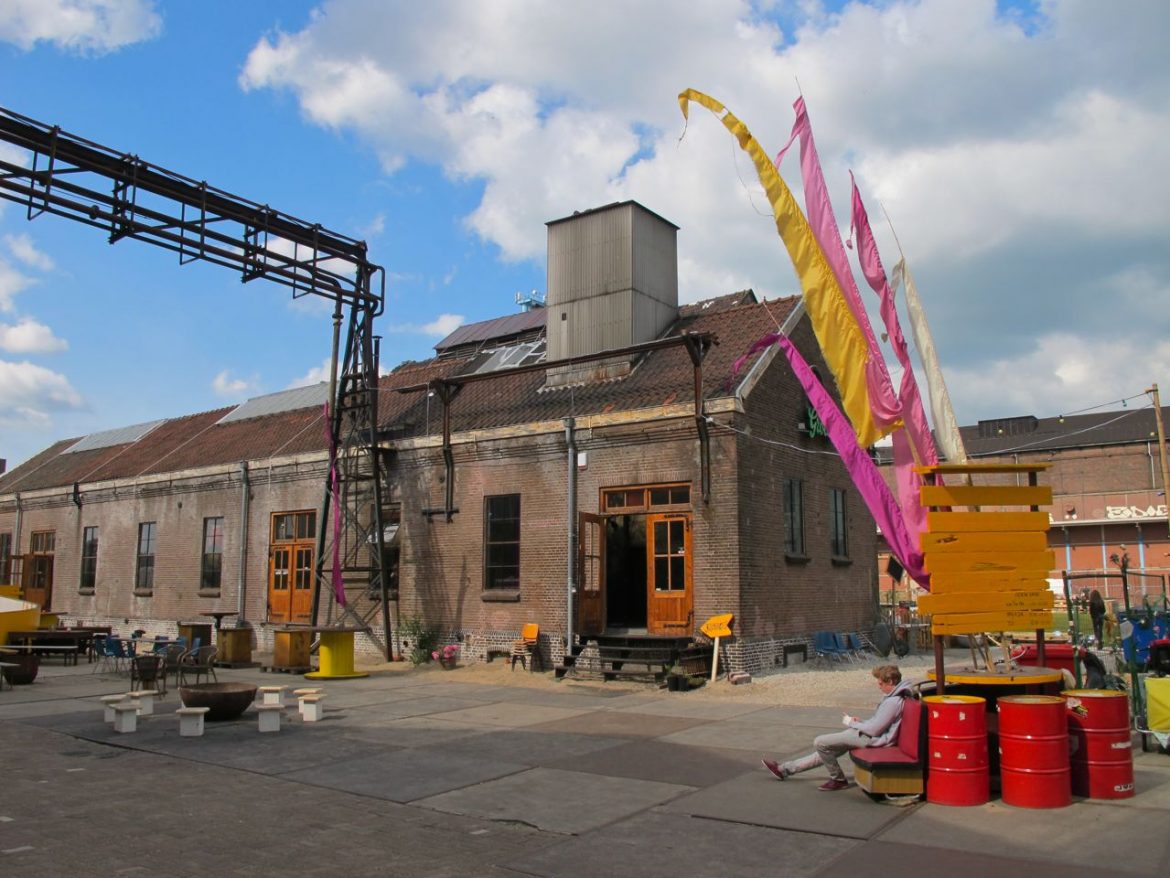 Club Roest (‘rust’ in Dutch) Amsterdam is a new bar and city beach on Oostenburg, one of three so called Eastern Islands that held industrial shipyards, steamboat harbours and steam engine factories more than a century ago. Roest captures the industrial feel of the former function. Its large outside terrace with laid back atmosphere, the excellent location along the calm waterfront canal and a fantastic view on the monumental Van Gendt-halls next door provide an excellent way to spend a tranquil afternoon or an entertaining night.

The Island of Oostenberg, one of three created by filling up parts of the IJ-water, was used to harbour and build ships for the Dutch East Indies Company (VOC), a shipping company so big and powerful it could speak as a representative of the government of The Netherlands in the 17th century. The building of one ship took around 1,5 years. Every year, one new ship was built. At one point in time, the VOC had 150 ships in the water somewhere in the world.

In the 19th century, the introduction of the steam engine changed the face of Oostenburg. The VOC left the stage, bankrupt and Oostenburg turned into a harbour for steamboat services (the Dutch KNSM) sailing passengers to destinations like the Mediterranean, Hamburg, London and later even the America’s. A name to remember is Paul van Vlissingen, a man with a vision. Van Vlissingen created the Amsterdam Steamboat Company (ASM) and laid the foundation of a Dutch steam machine industry that was going to rule the world. 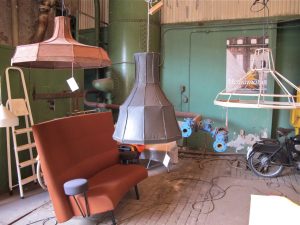 With investments from machine producer C.T. Stork in 1891, ASM started to focus on rail road machineries: steam engines, locomotives, trains and trams, becoming famous all over the world by the name Werkspoor.

In 1897, Werkspoor received an order from the Netherlands South African Railway Company to build 40 locomotives and 400 wagons. 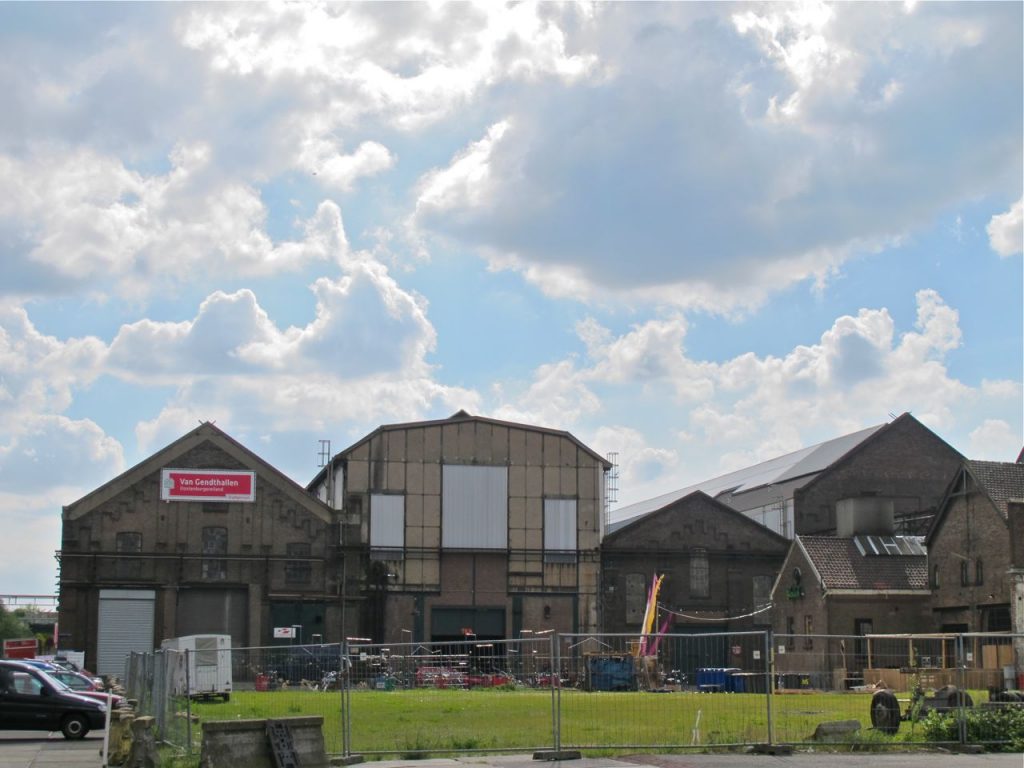 In 1920 shipbuilder KNSM moved to Amsterdam North, becoming NDSM. Most of the original VOC, ASM and social housing buildings from this rich industrial period of Amsterdam were demolished. The Van Gendt-Halls though, still remain. All have been declared National Monuments. 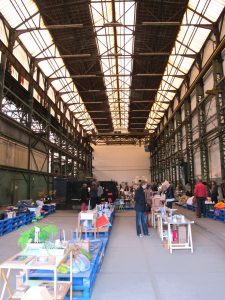 In total there are 5 ‘Van Gendt’ halls on the former Stork factory grounds, totalling 15.000 m². The original structure of the halls is still visible, as well as historic details like cranes and control towers inside. The halls are rented to small, creative companies. Stork-Werkspoor was taken over in 1989 by Finland company Wärtsilä.

The history of Oostenburg Island, Werkspoor and Stork has been captured and gathered by the Werkspoor Museum. The museum is located in the former ‘lijnbaan’, a 500-meter long VOC-building dating back to 1660.

However, the museum is not open for visits. It is used by Stork as a reception centre and can be rented for meetings and conferences. 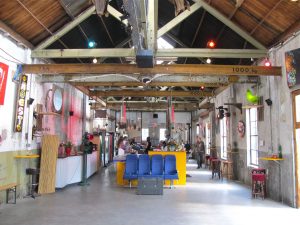 The Amsterdam council wishes to bring the industrial site Oostenburg back to life.

In the next years, the owner, social housing company Stadgenoot will develop plans to create a new, vibrant area with housing, shops, entertainment and creative hotspots, while honouring the historic background of Oostenburg,

Part of this new development is Roest. This bar and club is located in a old building that was used to generate energy for the Van Gendt-halls next door. In summer Roest uses its large space as a beach along the waterfront canal (with imported sand). Roest presents a full programme in winter and summer, varying from open air cinema, club nights, acoustic sessions around a camp fire, barbecues, markets, festivals and expositions. Across the street are the Van Gendt-halls, usually open for visitors to stroll around and to be impressed by the immense metal structures and industrial feel. 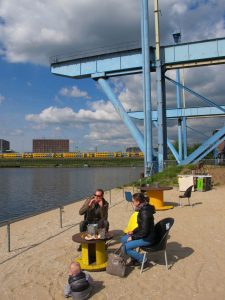 Rosa & Rita is the name of a restaurant at Conrad Street, housed in he building that used to be a washing room for the men working at the factory. The name is drawn from two ships: Rosa and Rita, built at NSM, who received their engines at Werkspoor. The restaurant has a large terrace for outdoor dining in Amsterdam.

A part of the halls has been rented to Lasercity Amsterdam and to Amsterdam Convention Factory, to organise events.

How to get to Roest Amsterdam

What’s up Tours offers a tour on the former industrial islands of Oostenburg and surrounding areas. Learn all about the VOC years and Stork activities. For more information, check What’s up Tours.

Tips to Find the Right Event Space in...

Visit Amsterdam on a cruise

Experience the real Amsterdam with Your Amsterdam PA

Tips to Find the Right Event...

Experience the real Amsterdam with Your...