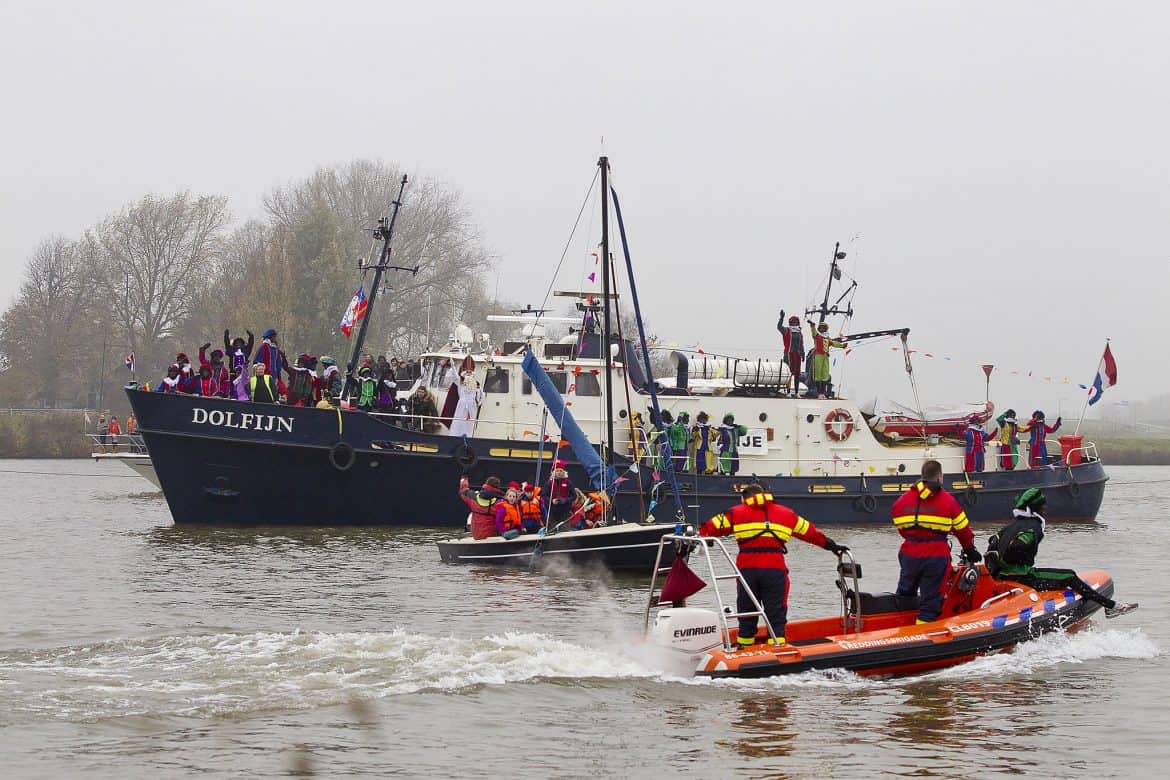 Sinterklaas is the Santaclaus of the Netherlands. The feast of Sinterklaas is a national tradition in Holland, celebrated also in parts of Germany and Belgium. In The Netherlands, we call him Sinterklaas, Sint, Sint Nicolaas or The Good Saint (De Goede Sint). Sint arrives with his bunch of Black Petes ‘Zwarte Piet’ on a steamboat from Spain in mid-November. The feast itself is on 5 December.

The history of Santa in Holland

Nobody knows if Santa ever really existed. Fact is in the 8th century, people came up with the story of a generous bishop named Nicolas, who performed a series of miracles. Nicolas lived in what is now Turkey around 280.

The real Saint Nicolas died on December 6th. He was first buried in Myra (Turkey). In 1807, the good saint was transported to Bari, Italy, where a church was built for him. Today many people visit his grave. It is said the water that flows from his grave can perform miracles.

In the 13th century, people in The Netherlands started to commemorate Saint Nicolas by donating food to poor children on December 6th (the day he died, and not, as we say in Holland his birthday).

Later, the generosity of Nicolas was celebrated by children being allowed ‘to put up a shoe beneath the chimney’. Saint Nicolas (Sint Nicolaas) would then put coins in the shoe during the night.

Many new traditions soon followed: special Sinterklaas-food, markets, and funfairs. At first, it was only celebrated in big cities. Calvinists tried to ban the festivities of Saint Nicolas (Sinterklaas) because it was considered a pagan, or catholic feast. Like pagan god Odin who rode the 8-legged Sleipnir trough the air, Sinterklaas rode a white horse.

Sinterklaas brings morals to the children

Around 1750 and 1850, adults started to use Sinterklaas to threaten and punish children. The feast was used as a way to brings morals to children. Parents threatened their children that if they did not obey, they would not receive gifts. ‘Zwarte Piet’ could even put you in his bag and take you with him on his boat to Spain!

The tradition of ‘Sinterklaas‘ in the Netherlands

Sinterklaas is still a very popular tradition in the Netherlands. In almost all towns, children and their parents head off to the port or docks in their local town to witness the arrival of Sint. Sint tours the city on his horse, while the Pieten -his helpers, interact with the children, handing out candy and special biscuits, such as ‘pepernoten‘.

The National Event, when the ‘real’ Sinterklaas arrives, is broadcasted live on television. This is a real happening. Every year, something quite ‘unexpected’ happens (oh, no! they forgot to bring all the presents!)

To ‘set the shoe’

In the evening, children ‘set’ their shoes and put a letter or a wish list in for Sint and a carrot for his horse. During the night, Sint rides his white horse on the rooftops together with his helper Black Pete (Zwarte Piet). They throw down small presents or chocolate in the children’s shoes.

The Eve of Saint Nicolas on 5 December

The ‘Eve of Sinterklaas’ (Avond van Sinterklaas) is on December 5th. Sometimes Sint himself pays a visit to the house. The children gather, all excited. Each may sit on Sint’s lap. Sint asks if the child has been good this year. Then he reads them from The Big Red Book. All the answers are in the red book and Sint knows everything about every child in the whole country. He then gives them a present.

Grown-ups generally have what is called ‘surprise’. Some weeks before they draw names from a hat and you have to make a ‘surprise’. This is a handmade present, that has something to do with that person, preferable something embarrassing. Usually, there is also a poem.

Inside the ‘surprise’ is a present. This tradition is sometimes also carried out at work, with colleagues, or among groups of friends.

From Sinterklaas to Santa Claus

Dutch immigrants brought the tradition of Sinter Klaas to New York in the 17th century. Over the centuries, the American Sinter Klaas became Santa Claus, a bearded, happy man dressed in a red jacket who lives on the North Pole, bringing gifts for kids for Christmas.

Pete ‘Zwarte Piet’ is Sinterklaas’ companion. Acrobatic as he is, he climbs down the chimneys to deliver the presents to the children. At first, there was only one Zwarte Piet. His face was made black. Later someone decided it would be fun if they were a whole bunch of them. And now there are many ‘Zwarte Pieten’.

All the Zwarte Pieten have the same name (‘Piet’), but they have different functions: direction-Piet, gift-wrapper-Piet etcetera. Pete is dressed in a traditional page costume from the 16th, 17th century.

There are many theories about the background of Zwarte Piet. Some believe that Sinterklaas, sailing the seas from Spain brought with him a Morish helper. Here, Sinterklaas is the good saint and Zwarte Piet is the devil: good vs evil. The good vs evil story is still clearly visible in the Austrian tradition. Here, Krampus, Sinterklaas’ helper is a really scary monster, dragging chains around as he marches loudly through the streets.

If you have behaved badly, Piet would take you into his big brown bag and take you on the boat to Spain, where you would have to work hard for Sinterklaas, depicted as some kind of dictator.

Until astonishingly late (mid 20th century) Zwarte Piet was depicted as a little dumb, speaking with a strong African accent. Later this changed to Zwarte Piet being the more intelligent assistant and Sinterklaas the somewhat absent-minded old man.

In this day and age, according to many people, Dutch Black Pete is racist. Every year there are many protests, against and pro-Piet. Emotions run high on both sides.

Dutch cities decide for themselves how to color ‘Zwarte Piet’. From the year 2018 in Amsterdam, Zwarte Piet is no longer black-faced. His face is only smeared with black grease. His face became a bit dark because he climbs down chimneys.

These are the best things to...