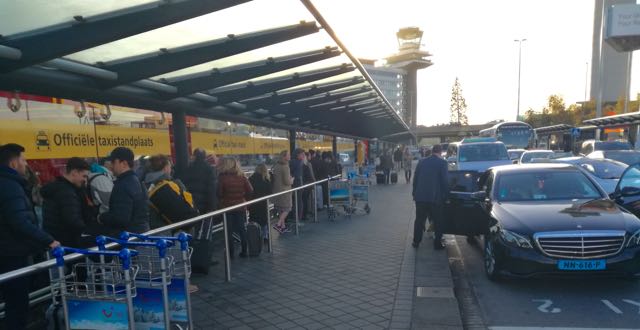 Not many people take a taxi in Amsterdam. Because it’s a small city and flat, most people use a bicycle to get around. Taxis in Amsterdam are also rather expensive. Still, there are many taxi stands where you can take a taxi. At Amsterdam Airport there is a special taxi stand for people who want to take a taxi to get into the city.

10 Questions about taxis in Amsterdam

1. Are taxis expensive in Amsterdam?

Yes, taxis are very expensive in Amsterdam. Taxis in Amsterdam set their own prices, but the government sets out a maximum fare price for taxis in the Netherlands. All taxis in Amsterdam are obliged to have a taximeter and to turn it on. You pay the price that’s on the taximeter.

2. How much is a taxi in Amsterdam?

The price of an official TCA Taxi is composed of three parts:

3. How much is a taxi from the airport to Amsterdam?

A taxi from Amsterdam Airport Schiphol to Central Station costs between € 45 and € 60. To take a legal taxi at the airport, follow the yellow signs outside to the official taxi stand.

It’s easiest to book a taxi online before you get on your flight.

Be careful! Many people get scammed at the Amsterdam airport when a taxi driver offers a cab inside the building. These drivers don’t have a license for the airport. The prices of those illegal taxis can be extremely high.

READ MORE: How to get from Amsterdam airport to Amsterdam.

4. Are taxis in Amsterdam good?

No, Amsterdam taxis are among the worst of Europe. In German research comparing the quality of taxi service in 22 European cities, Amsterdam came out number 19. Researchers asked test persons to take taxis and to judge the chauffeur, the taxi, the route, and the price.

According to the test people, in Amsterdam, taxis drove through red lights, made unnecessary detours, messed with the bill or just refused to take the passenger onboard entirely.

Many tourists report that a taxi in Amsterdam refuses to take them because the distance is too short.

5. How can I get a taxi in Amsterdam?

Most people call a taxi service company to order a taxi in Amsterdam. Taxi Centrale Amsterdam (TCA) is the biggest taxi company in Amsterdam.

Getting a taxi in the street

You can get a taxi in Amsterdam by hailing a car in the street. Legal taxis have blue number plates, a drivers’ pass on the dashboard and price list visible inside and outside.

Taxis in Amsterdam don’t have a special color. Only taxis that have a skylight on the roof of the car with word TAXI, are allowed to pick up customers in the street or at a taxi stand.

Be aware that taxis in Amsterdam cannot just stop anywhere. For instance, they cannot stop at a bus- or tram stop.

It’s better to go to the nearest ‘taxi stand’ (In Dutch: taxistandplaats). There are 50 stands in Amsterdam so there should be one nearby. You can recognize them by the blue sign that says: P-taxi.

6. Is Uber available in Amsterdam?

Yes, Uber exists in Amsterdam. Uber taxis are cheaper, but they can only be ordered by the Uber telephone app.

7. How many people go in a cab in Amsterdam?

Most Amsterdam taxis don’t carry more than 4 people per taxi. Most taxi services from the airport don’t allow more than 3 people. Only minivan taxis in Amsterdam allow 5 people or more.

8. Are there electric taxis in Amsterdam?

Yes, there are electric taxis in Amsterdam. Driving a car is the most air polluting act the average citizen commits. In Amsterdam, taking a cab is even worse. To be exact, taking an Amsterdam taxi is 35 times more polluting than driving a regular car.

To change this, Taxi Electric started with a green taxi service in Amsterdam. These taxis are electric and so have no directly polluting emissions. Order a green taxi online on www.taxi-e.nl or call +31 88 – 1004444.

9. Are there bike taxis in Amsterdam?

So-called black taxis or ‘snorders‘ are illegal taxis. Especially in the Amsterdam South East area (Amsterdam Zuidoost or ‘Bijlmer‘) there are hundreds of these black taxis. They are difficult to fight since customers are happy with them because they don’t charge as much as legal taxis.

10 Tips for Travellers to Amsterdam

You can complain on this website: http://www.taxiklacht.nl. I do order my bussines trips always on http://www.amsterdamts.com. Always nice drivers and good prices comparing with other company’s.

Who regulates the taxis in Amsterdam, makes all the rules? Which official do you complain to if a taxi gives a bad service?

How to get from the airport...

10 Tips for Travellers to Amsterdam