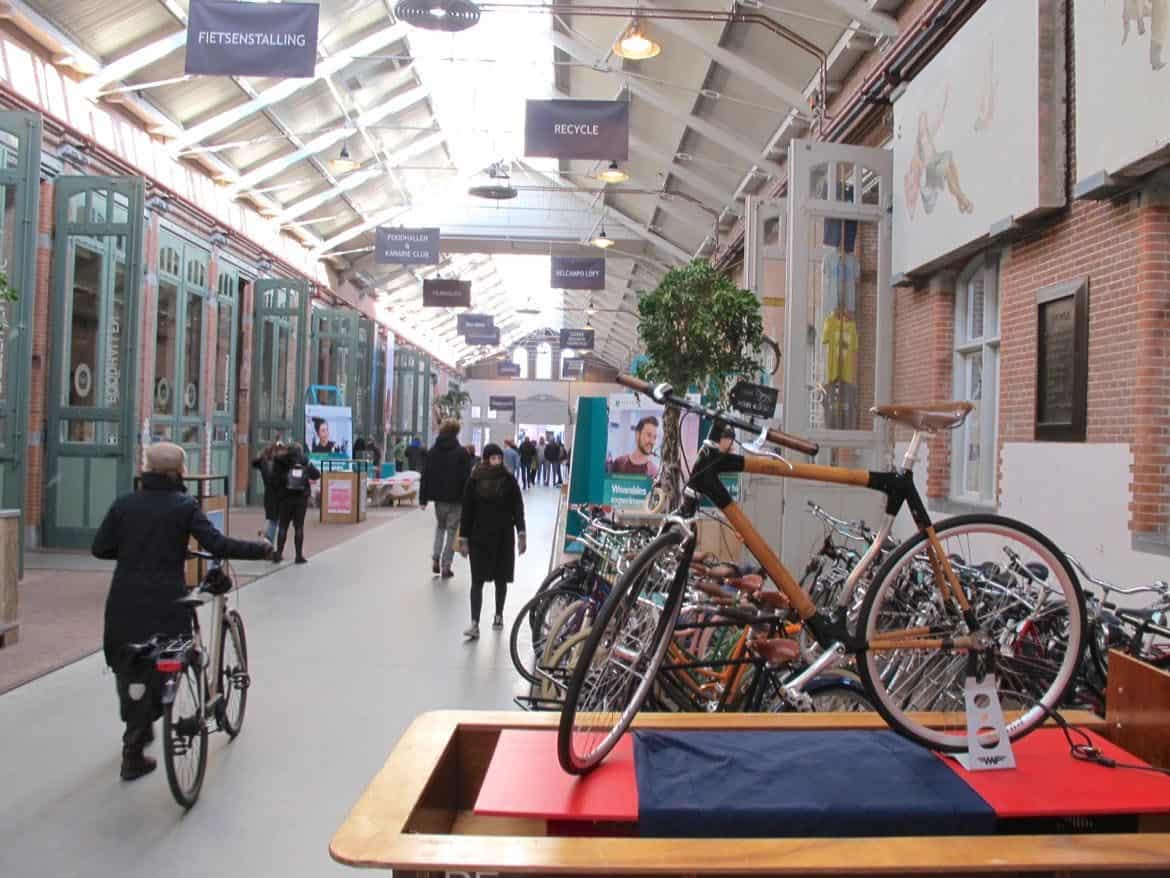 The Amsterdam Halls (‘De Hallen”) is a complex of monumental buildings in Amsterdam Oud-West. The buildings, former tram depots, were converted into cultural venues housing a cinema, a food court, a restaurant, a hotel, television studios, a library, an art gallery, and a number of boutiques, craft shops, and small businesses. On weekends De Hallen is often used as an indoor market for locally produced goods ‘Homeware’ and food. It’s a great place to spend some time when it’s raining in Amsterdam.

TIP Check the Amsterdam Events Calendar for dates for markets and special events.

A popular place at the De Hallen is the Food Court. At the Food Hallen you can enjoy delicacies from around the world here: ham from Spain, Chinese Dim Sum, German hotdogs, Indian, Mexican and many more. In the evening, it can get rather busy.

Try some Dutch food at the Amsterdam Food court Halls. From Amsterdam are the bitter balls at the Ballenbar from Michelin star chef Peter Gast and his former sous-chef Jeroen Elijzen.

At the mobile version of restaurant l’Entrecôte et les Dames (at Van Baerlestraat) you can try their entrecote steak. The hip Amsterdam burger bar The Butcher has burgers.  Sweet teeth must try a miniature tart from Dutch-French Petit gâteau.

For a quiet coffee, hop into the next door café of Belcampo. Belcampo is part of the Amsterdam public library, so there is enough food for thought. Plugin your laptop and write some emails while you sip your affordable coffee.

Find the Kanarie Club at the Bellamy Square (or walk all the way through the Food Court). There is an international feel to this light bar. In summer, there is a big sunny terrace outside and even a swimming pool upstairs!

In the summer (2021) there is even a city beach here! This is a cooperation between de Filmhallen, Kanarie Club and the Hallen Studios. The outdoor square is converted into a sandy beach, there are lazy chairs and regular events like outdoor films, live music and special brunches.

Hotel De Hallen is a hip design hotel located in the Amsterdam Halls. There are all kinds of quirky design features here with lots of plants and art. The outside terrace is also nice and they have their own bistro restaurant.

Shopping at the Amsterdam Hallen

Honoring the many workers that spent here working with their hands, the Amsterdam Halls focuses on craft and design shops, like Art Deco shop, where you can find original gifts from the 1920s.

Grand &Johnson show off their interior design in their own shop. Recycle is a modern bike shop that specializes in restoring and selling old, classic bikes. They offer people with a psychiatric background to find their way back into society by working in the shop.

De Hallen also houses a cinema. At the Film Hallen movie theatre, films are screened every day, from quality films from Hollywood to art house films and documentaries.

History and architecture of The Amsterdam Halls

De Hallen dates back to the early 1900s. It was built to house a tram depot and maintenance garage.  This area of Amsterdam is called Amsterdam Old-West, once a workers neighborhood. The workers repaired the first electric trams of the city. Since 2015, after big renovations, the Amsterdam Halls has become one of Amsterdam’s most popular cultural venues.

The architecture of  De Hallen is spacious, with its industrial history kept visible. The huge iron construction spans as a roof and gives the building a skylight. The Halls open via grand old wooden doors, set in typically Dutch red brick facade.

How to get to The Amsterdam Halls

The Amsterdam Halls are easily reachable. From Leidseplein it’s a twenty-minute walk. Just enter the Kinkerstraat from the Marnixstraat and keep walking. You can enter the Halls from the Kinkerstraat via the Bilderdijkkade (along the water), the Tollensestraat, or via the daily Ten Kate food market. Other popular places are Anne&Max coffee bar and The Breakfast Club (Northside).