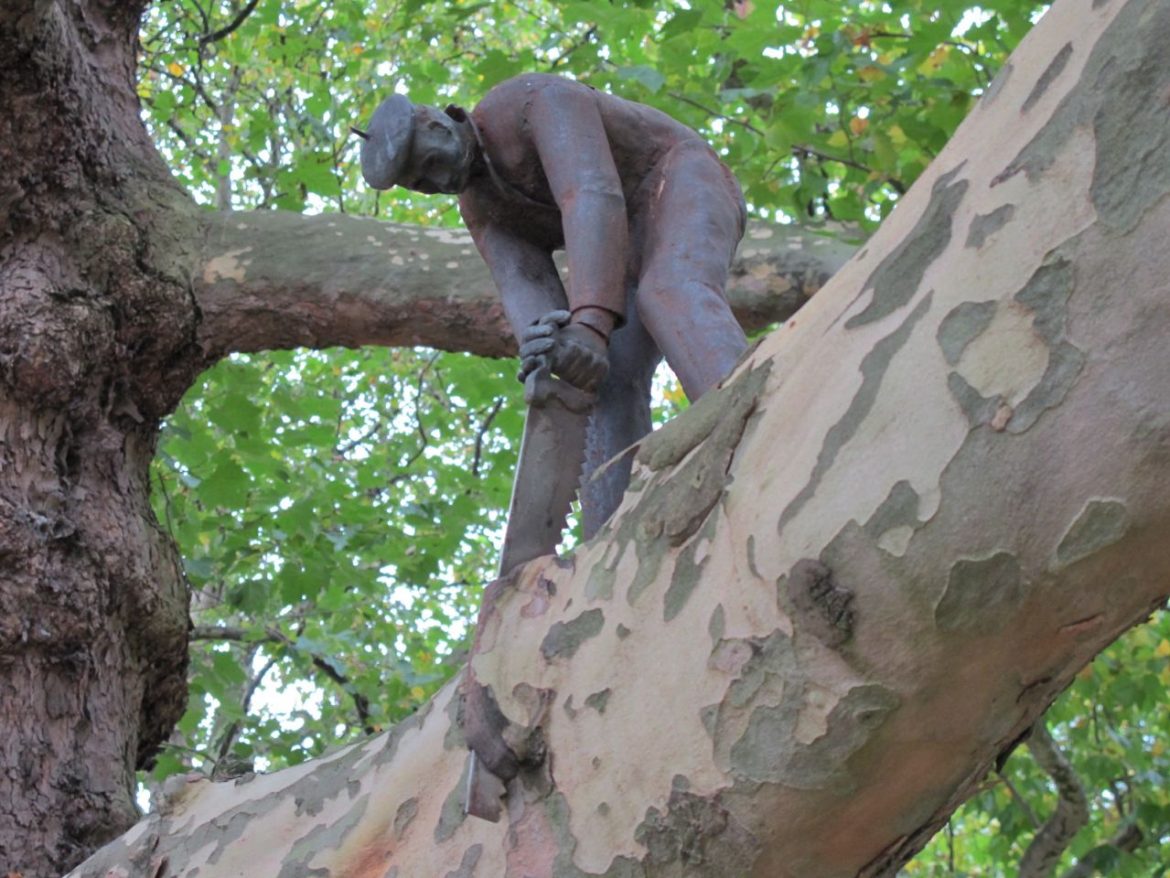 Since 1989, mysterious statues have appeared in Amsterdam. No one knows the maker, no one knows when they were placed there, they just seem to appear out of nowhere. Who can be its maker?

1. Running man with a violin case

The statue of a running man holding a violin case was the first statue by a mysterious artist that appeared in Amsterdam. It was placed in 1982 at Tweede Marnixplantsoen (Marnixstraat).

People named the statue: Man attempting to catch tram 10. The coated man seems to be in a rush. Though he lacks a head, he does find the time to pleasantly take his hat off to greet someone. Another funny element is the banana peel in front of this foot.

No name was left, no one seemed to know anything. The city council pretended not to know who made the statue.

And then, suddenly, the statue disappeared, only to reappear years later. Remarkably enough, the statue had now been painted blue…

UPDATE: In October 2019, the little man lost his log and disappeared.

The statue of a man attempting to sow down a branch of one of the large trees at Leidsebosje was the second mysterious sculpture to appear. The little iron fellow was placed near Leidseplein in 1989, January 30. That is the day before Queen Beatrix’s birthday. Again, no one knew who made the sculpture. No one claimed the artwork.

The fiddler (de Violist)took in quite a lot of attention when it was moved to the entrance of the Stopera in 1991. Though the Stopera at Waterlooplein is also home to the Amsterdam city hall, the city council still pretended to know nothing about the maker.

The statue was named the Fiddler. It is made of bronze. The musician seems to burst out of the floor, while playing his instrument.

According to a little book published in 2004, this statue was first placed ‘in the sea’, in Velsen. Also, there is a poem that accompanies the statue.

The bronze breast appeared very appropriately in the heart of Amsterdam’s red light district, just outside of Amsterdam oldest church, the Oude Kerk.

The breast at Oude Kerk was the fourth work of what many considered to be the same anonymous maker. A hand groping at one breast, all in bronze is laid subtly among the cobbled stones.

Neighbours however started to complain. The statue was considered sexist and would make loud noises at night when someone stepped on it. Taking the breasts away, was not a job to take on lightly, as the bronze piece was weighed with a meter large block of cement. Placing these breasts in the first place was obviously not a one man’s job…

A year later, a group of three men, sitting high up on red stools, chatting away appeared in the area of Amsterdam Oud-West. The statue (“Drie heertjes in gesprek“) was made in bronze and iron, obviously our anonymous artist favourite material.

You’ll find it at the market of Ten Kate Markt, in Amsterdam Oud West, Kinkerstraat.

Who made the anonymous sculptures of Amsterdam?

Conducting my own research, I found Andre Havas, a medical doctor, psychotherapist and sculptress in his free time the most likely artist. His work resembles the autonomous sculptures.

Unfortunately, the sculpture in bronze and iron, depicting a little girl on skeelers and her dog was lost when a truck hit it. Others have named American artist Gene Holt as the master at work, though his work doesn’t resemble the work at all.

Or, is it the former Queen?

But some are convinced the maker must be someone with great influence, to be able to have his/her statues placed without much hassle in such important spots, like Ouderkerksplein and Stopera.

They say the secret is in the sculptures. The colors of three of the statues are red, white and blue. The fiddler in the Stopera looks remarkably like Claus, the husband of former Queen Beatrix…. And so some say, the anonymous maker of the mysterious statues in Amsterdam is Beatrix herself, known to be a talented sculptress…

That’s not a harmonica – it’s an accordion.