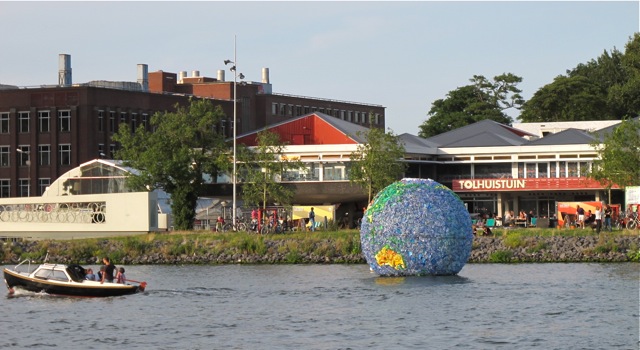 A lush and secluded garden just across the IJ water, a 3-minute ferry ride hosts a series of intimate ambiance mini-festivals during summer.  The garden of Tolhuistuin is an easy to reach spot for a laid back crowd to hang out, chill, drink, eat and try out some dancing moves.

Tolhuistuin consists of five buildings and a garden. The site was part of the Royal Dutch Shell oil company who built a restaurant for its employees working in the laboratory in the tower next door.

Though the Tolhuistuin does not have a license to play loud music, but this problem is charmingly solved by letting bands play acoustically, adding to the calm and relaxing ambiance of the garden. The garden is open every day on warm days.

Please check the Tolhuistuin agenda for a calender of events. To get there, take the ferry to Buikslotermeerweg from behind Amsterdam Central Station.

History of the Tolhuis garden

The history of the Tolhuistuin reveals a festive background. Some 100 years ago, the garden was a special place for the Amsterdam inhabitants who came over to dance and drink. The name refers to the function of the first building that arose in the area. When the waterway from the North of Amsterdam towards the harbor of Den Helder was dug (Noordhollandsche Kanaal, 1825), passing ships had to pay a toll fee, an administration that took place in the toll house (Tolhuis).

As the Amsterdam canals were regularly dug to keep their depth, the mud was taken to the North of Amsterdam. When the mud slid back in the IJ, a new piece of land was created called Buiksloterham. In 1876 a large and deep canal for large sea vessels was dug, connecting the harbour of Amsterdam to the North Sea.

Shipyards, industries and housing quickly followed and a new neighbourhood in Amsterdam was set in place: the Northern IJ bank. (Noordelijke IJ-oever).

Dutch oil company Shell built its famous tower in 1913 for laboratory activities, later expanding its property acquiring the Tolhuistuin. In 2003 Shell announced it was moving away from the site. The city council was happy to start planning a new neighbourhood. The Tolhuistuin and the remarkable building of the former Shell restaurants were slowly made into a cultural hotspot including a large stage, an exhibition space, a large café, a restaurant and spaces rented out to small companies in the creative industry.

Next door to the Tolhuishuis, the impressive EYE Film Museum was developed. The residential area is still in development. Some 522 apartments are being built.

The future of the Shell tower is not yet determined. The Toren Overhoeks, as it’s officially called, is a design by Dutch architect Arthur Staal dating back to 1966. In 2011, the tower was squatted by Occupy protesters. The occupants turned the building into a waste full of excrements and people were injured due to regular fights. A man was found dead by overdose. The police emptied the building when they caught thieves stripping the building off its copper.