Side tripsThings to do in Amsterdam

A guide to visiting a cheese market in Holland 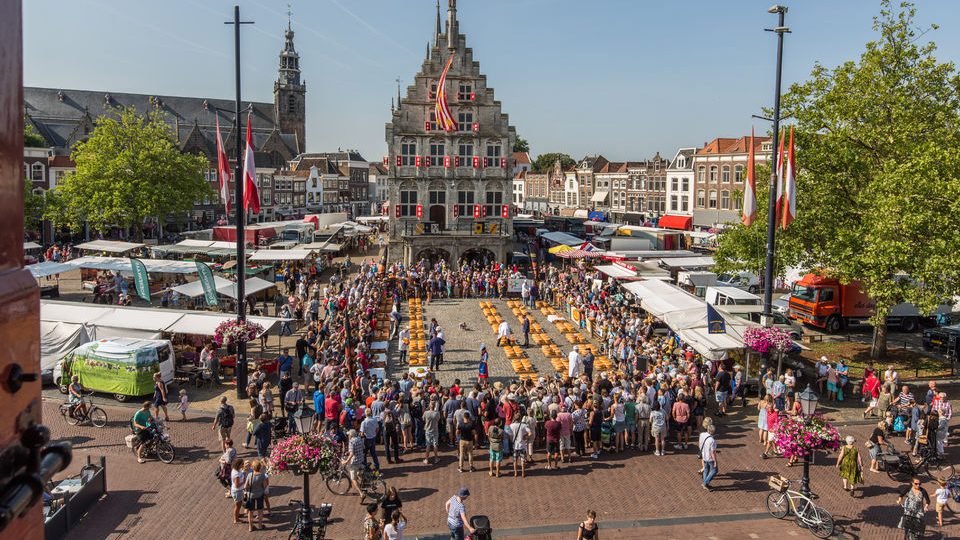 A visit to a cheese market is a great idea for a day trip from Amsterdam. In Holland, there are five cheese markets. The Cheese Market of Edam is nearest to Amsterdam. The market of Woerden is most authentic, as the cheese is still really sold there. The most famous markets are in the bigger cities Alkmaar and Gouda.

Are there Cheese Markets in Amsterdam?

The cheese market of Edam is only 20 kilometers from Amsterdam. Edam is a lovely small village, that is not as touristy as Volendam or Monnickendam. Edam makes excellent cheese, known as Edammer cheese.

In July and August, you can witness a historic reenactment of Edam’s century-old cheese market. The cheese market of Edam takes place every Wednesday morning. The cheeses are brought to the market by horse-drawn carts and by boat.

Alkmaar is an old town but it’s also great for shopping. And it has a good variety of museums. Worth visiting is the municipal museum Stedelijk Museum Alkmaar to learn more about the history of the area.

The Cheese Museum is located at the historical Weighing House. There is the Beer Museum De Boom’, located in a former brewery dating back to the 17th century where you can try different locally brewed beers. And there is the Beatles Museum!

The ritual of the cheese markets in Holland

For hundreds of years, cheesemakers in the Netherlands brought their large, round cheeses to the market square in town. But the cheeses are very big and very heavy. Special teams (vemen) have to carry the cheese on barrows that weigh more than 160 kilos!

After the customers try the cheeses and find the one they like, they start bargaining. The bargaining is done with a ritual using a special handshake named ‘clap the hands’ (handjeklap). They smack the hand of the other and shout out the price. If they agree on a price, the porters then carry the cheese to the weighing house (de Waag).

The Cheese Market of Gouda

The name ‘Gouda Cheese’ comes from the Dutch city of Gouda. Gouda is near The Hague. Gouda is a beautiful historic town, with the old City Hall, Saint John’s Church and the weighing house as monumental highlights. From April till August, Gouda has its own cheese market every Thursday morning. Apart from the cheese, Gouda is also known for its sweet syrup waffles, pipes, and earthenware.

The real Cheese Market of Woerden

At the small town of Woerden, near Utrecht, the 100-year old cheese market is the real thing. Farmers from surrounding farms bring their cheese to market where it is sold. The price determines the national prices of Dutch Farmers Cheese (Boerenkaas). Great cheese!

In summer, you see the Woerden Cheese market live in action every Saturday morning (27 April –  24 August 2019). There is a special program that includes tasting and a ‘tableau vivant’ between 11 am – 12. There is also a local market with cheese and local produce all day.

Recommended is the Grass Cheese day in June when the young ‘grass cheese’ is presented. On Grass cheese day the whole city celebrates spring and the new cheese season. That day it’s all about cheese, and a giant 150 kg grass cheese is auctioned for charity. You can taste, watch, and experience cheese.

The Cow market, in dutch ‘Koeiemart’, is an old tradition that has been going on in Woerden for over 600 years. It’s is a festive cow market with cow show, a large market, fair and much more entertainment.

How to get to Woerden cheese market

From Amsterdam Central Station, Woerden is easy to reach by train. The trip takes 40 minutes. From Utrecht it is only 15 minutes by train to Woerden.