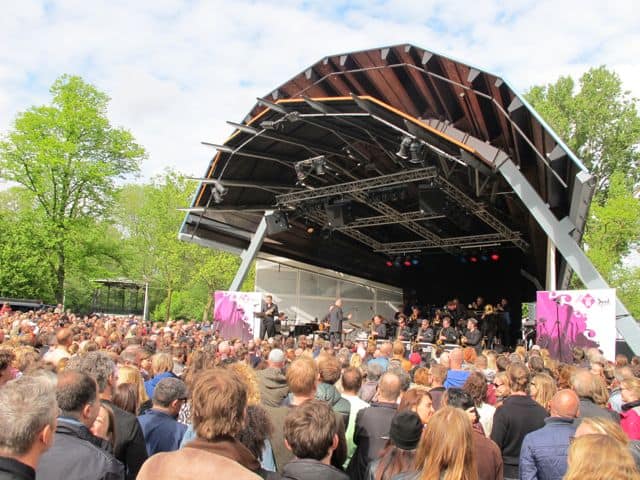 This year only 250 people are allowed in. All visitors will be seated. To attend a show, you need to book a seat in advance. The Vondelpark shows are no longer free, but costs 7,50.

The performances vary from pop music, classical music and Dutch comedy. Almost all performers are Dutch. Shows last 60 minutes and are then repeated.

The Vondelpark dates back to 1865. It was set up by a group of private people. From 1954 the Amsterdam Vondelpark is taken over by the Amsterdam council for €1 guilder and opened up to all the inhabitants of Amsterdam.

Hippies in the Vondelpark

In the 50s the Vondelpark festivities started with music performances. During the 1970s the hippies found their home in the Vondelpark, making music, smoking marihuana, sleeping and celebrating peace.

Happenings
At one point in time, there were 1500 to 2000 young people among which many young Americans, camping in the park. The Amsterdam people head into the park to witness their colourful display.

In the little musical chapel next to the the present Open Air Theatre there were the famous Happenings.

Up to this day, the Amsterdam Vondelpark Festival is a great chance to enjoy the greens of the park, have a drink and watch a show.