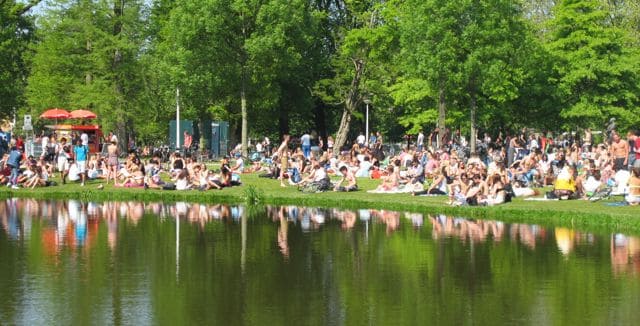 When temperatures rise in Amsterdam, the Vondelpark is the place to be. Located in the center of the city, the entrance directly behind Leidseplein, the greens of the Vondelpark have turned into a paradise for travelers and tourists. The Vondelpark is a beautiful park in the romantic English landscape style by architect L.D. Zocher.

10 Facts about the Amsterdam Vondelpark

1. The Vondelpark was ‘members only’

The Vondelpark was created in 1867 by a group of citizens, wealthy members of society. The new Vondelpark was fenced in and only open to members and on invitation. In 1953 the city council bought the park for once guilder. The park had become too expensive to maintain. Ever since it is a public park.

2. ‘Vondel’ is the name of a famous Dutch writer

The Vondelpark is named after the Dutch playwright and writer Joost van den Vondel. There is a large statue of him at the beginning of the park.

3. Sex is allowed in Vondelpark

In 2009 the city council considered allowing ‘cruising’: people having sex in the Vondelpark. According to research, people were more annoyed by dogs without a leash, than by people looking to have sex.

The Vondelpark is 47 hectares (120 acres) big. It’s a rectangle shape, with two bicycle lanes running on both sides. The Vondelpark ‘run’ is 3,5 kilometers. By comparison, Central Park in New York is 840 acres, 7 times as big. Both parks were created at the end of the 19th century.

5. The trees in the Vondelpark are not very old

Most of the trees in the Vondelpark are chopped down before they reach old age. That is because the soil of the park is very wet, like a swamp. To keep our feet dry, the groundwater level in the park is kept low artificially. Unfortunately, the level is too low for the roots of the trees. After about 50 years, the trees fall ill. Before the trees fall over, they must be chopped.

6. The Nazis saved the Vondelpark

During the occupation in the Second World War, the German Nazis used the camp. At the end of the war, there was a shortage of food and firewood. People went into the Vondelpark to cut down the trees for firewood. The Nazis then closed the Vondelpark, thereby saving the trees.

There is also a farm in the Vondelpark. This section is not open to the public. In the war, ten people were in hiding in a barn from the Germans.

However, some trees thrive in a swamp and are over 100 years old.

The best part about the Vondelpark is probably the Vondelpark Festival. Every weekend in summer, there is live music, theatre and dance for free at the Open Air Theatre in Vondelpark.

8. Pink Floyd played at the Vondelbunker

Thousands of people probably walk and ride their bike underneath the bridge that spans the Vondelpark without realizing there is a secret bunker here. The Vondelbunker is a remainder of the German occupation. It’s atomic air-raid shelter.

In the 1960s, the bunker was used as a stage for beat groups: Lijn 3. The then young Pink Floyd performed here! Since 2011, the remarkable space is used for concerts, cultural events and parties. Check Vondelbunker.

At the end of the 1960s, dozens of hippies lived in the Vondelpark. They set up camp, smoked weed and made music in the small musical chapel.

10. The Vondelpark is sinking

While the houses and streets in Amsterdam were built on poles, the parks are not. The water level in the park is controlled so the parks don’t turn into swamps. By lowering the water level however, the ground of Vondelpark is slowly sinking.

Every now and then, the entire park needs to be elevated. The last big renovation took place from 1999 to 2010. The project consisted of improving drainage, raising all of the paths and lanes, planting new and moving old trees and diminishing the risk of the soil to sink. Also, all the bars and restaurants, gates, bridges, statues and playgrounds had some form of renovation.

Compelling reasons to take the bus and skip...

I am just back and we stayed right beside the park. Stayokay hostle was the name of the place and I would have to recomend it. despite the name which had me worried. back to the park though it was busy even in the cold start of November. People out playing guitar, having a few quite beers or smoking a joint all within site of parents playing with their dogs and no body bothered anybody. and the park is huge!

Compelling reasons to take the bus...