You can see them virtually everywhere: X X X, lined vertically or horizontally on a background of black and red. Amsterdam’s X’s are in fact crosses. Amsterdam’s red crosses are part of the official symbol of Amsterdam. You can find the X’s on the official flag of the city of Amsterdam, on street furniture like lampposts, and even on some of Amsterdam’s 17th-century churches (Westerkerk and Noorderkerk).

So what do the three crosses mean?

An ‘X’ against evil 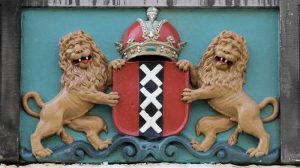 Original Coat of Arms (Wapenschild) of Amsterdam, here, on a facade.

The X-shape in the Amsterdam flag and Coat of Arms is a common symbol. Even in the Middle Ages in the Netherlands, people sometimes carved a cross in their door to shield off bad luck.

The cross is also known as Saint Andrew‘s cross. The X is named after the apostle who was crucified to a similarly shaped cross. He insisted on dying on this specific cross because the holy man refused to die on the same shaped cross as Jesus Christ.

There are many flags and coats of arms who have a similar cross, like the flag of Scotland and even the American Union Jack.

But Amsterdam has three crosses. So why three?

Some people say that the three crosses represent the three plagues that came upon Amsterdam: water, fire, and the plague. But because the coat of arms is much older than the plague, this is an unlikely reason.

What does the crown in Amsterdam’s lampposts mean?

Maybe you have noticed that almost all lampposts in the old town of Amsterdam, are topped with a crown. This is the same ‘Imperial Crown’ that tops the Westerkerk Church. The Crown is also part of Amsterdam’s Coat of Arms. Only a real emperor can give a city the right to ‘wear the Crown’. It used to be a real privilege. It proved the Emperor protected the Amsterdam merchants when they were trading in other cities.

The “Imperial Crown’ was a gift from King Maximillian of Austria, who honored the city by giving them this privilege in 1489. The reason why the King gave Amsterdam his blessings, is the subject of a famous legend.

The Legend of the Imperial Crown of Amsterdam

According to the story, King Maximillian was at the Dutch city of The Hague when he fell terribly ill from the plague. Only a miracle could save his life. And there, on his sickbed, the King made a vow that if he would get well, he would undertake a pilgrimage to Amsterdam. There, he would visit the chapel where the Miracle of Amsterdam had taken place.

And, against all odds, the King recovered. As soon as he was well again, he fulfilled his promise. During this visit to Amsterdam, he granted the town the right to wear the Crown.

This Amsterdam legend may be famous, but it is not true. In reality, there was a battle going on in the 15th century that the Dutch know as the ‘Hoekse and Kabeljauwse twisten’ (the hook and cod wars). During the struggles, King Maximillian supported the progressive cities in their quest for more power against the conservative noblemen. Amsterdam lent the King a large sum of money to continue the fight.

In this version, the right to wear the Imperial Crown was granted as a way of paying back the support. When a few years later the King proclaimed himself Emperor of the Holy Roman Empire, the Amsterdam people changed the Royal Crown into an Imperial Crown!

Is the Imperial Crown really on top of the Westerkerk?

Also on the Amsterdam Coat of Arms are these three words: Heldhaftig, Vastberaden, Barmhartig. These words are the motto or slogan of the city. The meaning of these words is: Courageous, Determined and Merciful/charitable. The words were added after the Second World War as a gift from Queen Wilhelmina, who was impressed by the February Strike in Amsterdam

How to get from the airport...