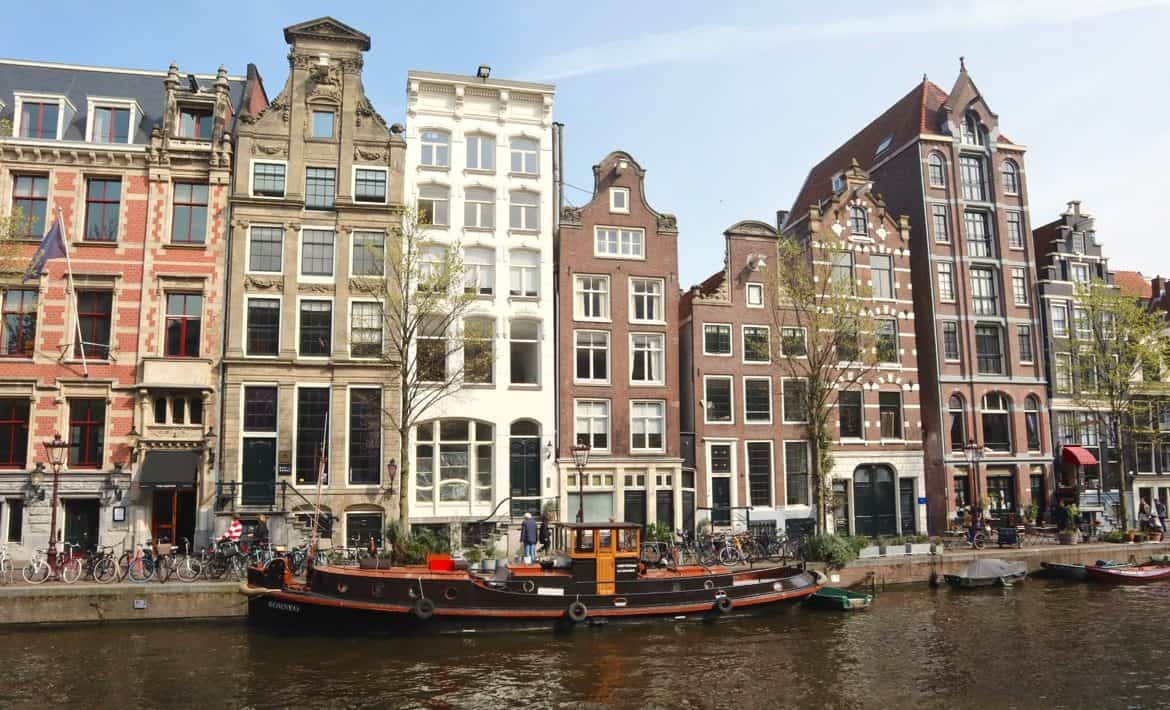 The answer to this question lies in history. Throughout the centuries, the expansions of Amsterdam were planned. The canals Herengracht, Keizersgracht, and Prinsengracht were dug in one planned phase, from 1613 to 1662. The plots of land along the canals that were sold were initially quite small. Each plot was 5 to 7 meters in width.

The small size of the plots along the waterfront assured that a maximum amount of houses has an entrance on the canal. Ships and barges sailing through the rivers and canals were the most important means of transportation of people and goods in the late 16th century.

Many slim houses in Amsterdam have an attic where goods like spices and tobacco could be stored. The goods were not carried up the narrow stairs but hoisted up from street level with a rope using a special beam. You can still see these beams with a hook above the attic window on the facade of many houses in Amsterdam. The attic window does not have any glass windows but instead has shutters.

The houses in Amsterdam may be narrow, but they are quite deep. In the back of the block of houses, there is a spacious private garden. Sometimes there was a little garden house or carriage house or stables for horses. Nowadays these gardens belong to the owner of the ground floor apartment.

Later, when there was a shortage of space in Amsterdam, more living, working and storage spaces were built in the backyards or gardens of the canals houses. The houses along the canals were connected with these so-called ‘annexes’ by a corridor.

As they were hidden from view and inaccessible from the street, these annexes could be used as hiding places. The Jewish girl Anne Frank and her family hid in such ‘secret annex’ from the nazis during World War II.

Not all houses along the Amsterdam canals are narrow. Rich merchants who could afford it, simply bought two plots of land to build a grand ‘city palace’ along the water.

Especially along the ‘Golden Bent’ (Gouden Bocht) of the Herengracht, where the wealthiest of the wealthy lived, the houses are much bigger. Also, these houses don’t have an attic for storage or hoist beam. These bankers and magistrates were already rich enough. And moving house is also not a problem, often they have the most spectacular staircases, decorated heavily.

Many taxes were determined by the size of the facade along the water. Most city guides and guide books tell you this is the reason for the narrow canal houses. But this can’t be the reason, because when these taxes were introduced, the canal ring had already been dug and the houses had already been built!