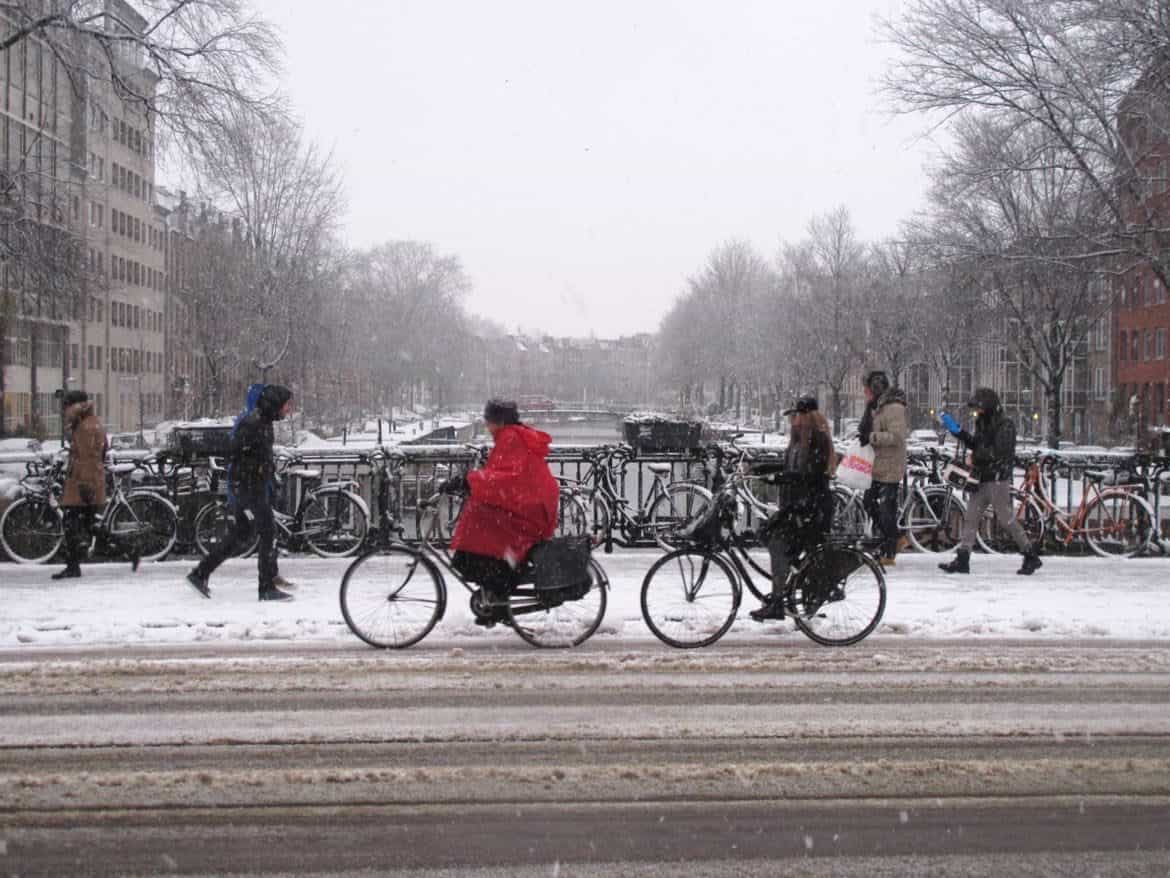 Though the average temperature in winter in Amsterdam rarely drops below 0ºC (32ºF), the chilling Amsterdam wind can make it feel like you have just undertaken a journey to the plains of Alaska. Winter in Amsterdam can feel very cold because there is always a lot of wind. Prepare for winter by dressing up warm, with mittens, a woolen hat and keep eating Dutch traditional winter food like hutspot en pea soup!

Are winters cold in Amsterdam?

The Netherlands has what we call a ‘temperate climate’. This means there is no extreme weather in Holland. Winters are as cold as in Ireland, England and France. However, the weather can change quickly from cold to warm and vice versa.

In November, December and March, temperatures in Holland range from 1 to 12ºC (33 – 48ºF). In deep winter, the months of January and February, average temperatures range from 0 to 5ºC.

In summer, average temperatures in Amsterdam go from 12 to 21ºC (53 to 70ºF). If you want to know when is the best time to go to Amsterdam, the answer is always: Summer! Unfortunately, it is no guarantee the weather in Amsterdam will be nice during your holiday: it can feel like winter in summer and it can feel like spring in winter!

Areas near the sea, like Amsterdam, always have a lot of wind. The wind determines what weather it will be. Most of the time, the wind comes from the sea. The famous Western winds come from the Atlantic ocean, swooping easily over the low lands.

A western wind brings clouds, mist and rain and a mild temperature. In winter, a western wind means temperatures will not drop below 0 degrees Celsius in Amsterdam. But that doesn’t mean you will not feel cold!

How cold does it get in Amsterdam?

Because of the strong winds, a normal winter day of 5 – 10ºC, can make it FEEL like -5 (23ºF). In Dutch we call this ‘gevoelstemperatuur’ (feel temperature). In English it’s called windchill. In a normal Dutch winter, because of the wind, the feel temperature is almost always a few degrees lower.

A wind blowing in from the Northeast means a drastic change in the weather. A little bit of the arctics pays a visit and temperatures easily drop below 0 at night. When the Northeastern winds are strong, the ‘feel’ temperature can drop to dangerous levels, making you feel extremely cold, even when its -7!

Do the canals freeze over in Amsterdam?

No, the canals don’t freeze over often. As the climate in winter is mild, natural ice does not grow as fast in Amsterdam as in more Eastern parts of The Netherlands. For the canals to turn into ice, it needs to below zero degrees Celcius day and night.

Do they go ice skating on canals in winter in Amsterdam?

When the canals freeze over, you can go ice skating in Amsterdam! Unfortunately, it rarely happens. Ice needs to be at least 7 centimeters thick to go ice skating. You need at least 3 days and 3 nights of -5 frost. Especially in a city like Amsterdam, heated by combustion and people, that happens rarely.

In current times of climate change, it happens maybe once every 20 years! Still, it happened in 2012. The canal boats were detoured, to make way for good, solid ice and people were ice skating on the Amsterdam canals! That was so much fun!

Does it snow in Amsterdam?

Yes, when you visit Amsterdam in winter, it’s likely you will see a little bit of snow falling. Maybe even a white Christmas in Amsterdam. In deep winter (January and February), the soil is cold enough to make snow ‘stay’ long enough to enjoy and go sledding.

How to dress in winter in Amsterdam?

Careful dressing and thoughtful packing is an important feature of a vacation to Amsterdam in winter. Here are some tips to stay warm in winter: